Former Vice President Joe Biden broadened his lead in the 2020 Democratic primary on Tuesday as three states—worth 441 delegates—moved forward with their primary contests while the entire country finds itself in the throes of a health crisis that has rocked everything from the economy to March Madness.

While there is a lot of uncertainty about what the coming weeks will bring given the pandemic, what is clear is that from now through the general election in November, this is a two-candidate race between Biden and President Donald Trump.

Despite officials urging people to stay home, millions of voters turned out to cast their ballots. Biden saw decisive wins in Florida, Illinois and Arizona, giving him an overwhelming lead in delegates. (Ohio postponed its primary hours before polls were set to open, citing concerns about COVID-19.) As of Tuesday, he now has more than half of the delegates he needs to win the nomination outright.

Meanwhile, Biden’s only other major opponent in the Democratic primary, Sen. Bernie Sanders, fell further behind with little hope of catching up. In his remarks Tuesday night, Biden attempted to appeal directly to Sanders’ supporters, among them young voters.

“I hear you. I know what’s at stake. I know what we have to do,” Biden said in streamed remarks from his home in Delaware after the first two states were called for him. “Our goal as a campaign, and my goal as a candidate for President is to unify this party, then to unify the nation.”

Though Sanders gave remarks early Tuesday evening, they were focused on the coronavirus pandemic. His campaign sent out a statement earlier in the day saying they were not engaging in “traditional” get-out-the-vote outreach in the states holding primaries. “We are making clear to voters that we believe going to the polls amid the coronavirus outbreak is a personal decision and we respect whichever choice they make,” Mike Casca, Sanders’ communication director, said in a statement.

Yes, Biden will have his work cut out for him if he hopes to be the unifying figure he’s pitched himself as. He will have a particular challenge in exciting progressives in the coming weeks and months. But the politics of the primary were less pronounced on Tuesday as the logistics of everyday life with the coronavirus outbreak overwhelmed everything, including the election.

The day’s primaries, for example, did not occur without difficulties for voters, volunteers and the campaigns themselves. In all three states that voted, poll workers failed to show up due to the outbreak, making it harder for voters who did to cast their ballots. In other places, lack of cleaning materials like hand sanitizer reportedly made people feel unsafe. And the campaigns have switched almost exclusively to virtual campaigning, an unprecedented move in the face of the extraordinary circumstances.

All this just days after the Centers for Disease Control put out new guidance recommending that for the next eight weeks, gatherings of 50 people or more be cancelled.

On Monday night, the Republican governor of Ohio, a state that was also scheduled to vote on Tuesday, declared a public health emergency because of coronavirus, postponing the primary at the last minute. “During this time when we face an unprecedented public health crisis, to conduct an election tomorrow would force poll workers and voters to place themselves at an unacceptable health risk of contracting coronavirus,” tweeted Gov. Mike DeWine.

The Democratic National Committee also urged states with upcoming primaries to expand measures like vote by mail, absentee voting and early voting to give voters flexibility and avoid confusion. “States that have not yet held primary elections should focus on implementing the aforementioned measures to make it easier and safer for voters to exercise their constitutional right to vote, instead of moving primaries to later in the cycle when timing around the virus remains unpredictable,” DNC Chair Tom Perez said in a statement on Tuesday.

While Biden was expected to do well in today’s primaries, political experts had little idea what to expect of Tuesday night’s results given the pandemic hovering over everything.

“The other thing that is completely thrown off and we have absolutely no idea about is turnout models and prediction. How many people are actually going to turn out to vote?” Kelly Dietrich, CEO of the National Democratic Training Committee, told TIME Tuesday morning. “I have no idea how to answer turnout questions at this point about any of that.”

Though it was clear early on that it was going to be a disappointing night for progressives, they did have one silver lining: Marie Newman, the progressive challenger to moderate, anti-abortion rights Illinois Democratic Rep. Dan Lipinski, who has weathered past primaries, was projected to beat the congressman. Progressives, including Sanders, had backed Newman.

Meanwhile Sanders’ path forward remains unclear. If he stays in the race he could try to pressure Biden to move further left. But as Americans remain entranced with the effects of the pandemic, he will have to convince voters that he is not just being a distraction for the Democratic Party. 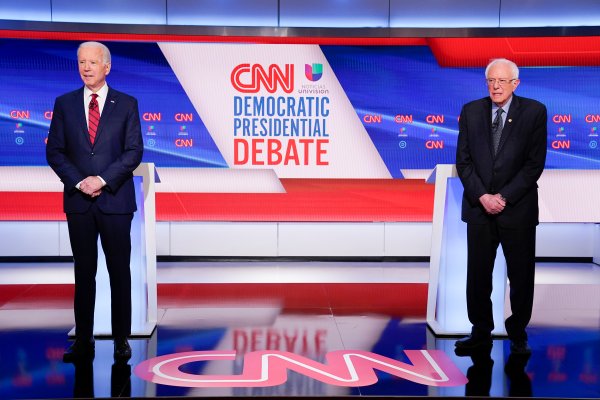