Democratic presidential frontrunner former Vice President Joe Biden and Vermont Sen. Bernie Sanders greeted each other with an elbow bump instead of a handshake before the primary’s first one-on-one debate Sunday night. Standing at podiums several feet apart in a studio without a live audience due to coronavirus precautions, both candidates called for more robust government action in the unfolding crisis and sought to position themselves as the leader with the best vision to guide the country through a national emergency.

The coronavirus pandemic was woven into much of the discussion, a surreal spectacle that took place shortly after the Centers for Disease Control and Prevention announced that gatherings for the next eight weeks with 50 or more people should be cancelled. In many places, Americans spent the weekend at home to prevent the spread of the virus. Trying to navigate closing schools and empty supermarket shelves, the fact that a presidential primary is underway is not at the forefront of the national dialogue.

For those who did tune in, the first one-on-one debate offered a plain view of the two fundamentally different candidates who have emerged in the primary’s narrowed field as Ohio, Illinois, Florida and Arizona get ready to vote on Tuesday. (States like Louisiana and Georgia have postponed their primary elections.) Though the candidates agreed more had to be done to help Americans facing the uncertainty of a pandemic, they also sparred over health care, their respective voting records on key issues, and what type of leadership voters are looking for.

Coming into the debate after a series of wins, Biden tried to present himself as the more electable and experienced leader, and rebuked Sanders’ calls for a political revolution. “We have problems we have to solve now. Now. What’s a revolution going to do? Disrupt everything in the meantime?” Biden asked.

He announced he would commit to choosing a woman as his Vice President if elected, a decision that comes as his nomination to be the Democratic candidate to face President Donald Trump looks increasingly likely. But he did not manage to entirely avoid the gaffes that have characterized some of his past performances. At one point, he had to correct himself for saying “undocumented alien” when discussing immigration, a phrase quick to draw rebuke from the left.

Sanders, for his part, continued to push his ideological purity as one of his greatest strengths, returning to some of his favorite themes of Super PACs and call-backs to his early support of positions like a $15 minimum wage. “I don’t have to rethink my position, because that’s what leadership is about— having the guts to take an unpopular vote,” Sanders said. “What leadership is about is going forward when it’s not popular. When it’s an idea that you get criticized for.” He also had to answer questions for his past praise for communist regimes and dictatorships, which many Democratic voters see as a potential liability.

Both candidates fielded questions about being able to draw diverse support in November. For Biden, perhaps one of the most consequential questions of the evening was about Latino voters and why he hasn’t done better with them, a demographic Sanders has consistently swept with. Biden was unable to provide an adequate answer, focusing instead on the fact that he’s been the one who has benefited from increased voter turnout. Moving forward in states like Arizona and Florida, he will have to demonstrate that he can make inroads with them, even as he’s been criticized for Obama-era immigration policies.

And Sanders was asked about his issues shoring up support with black voters, which he struggled with both in 2016 and 2020. He also did not face the question head on, pointing to the support he has among young voters and casting doubt on Biden’s ability to generate excitement among new voters.

The candidates have now largely switched to virtual campaigning, giving remarks in the last couple of days that highlighted how they would approach the current pandemic. Tonight, however, they both had to answer what they’re doing to take care of themselves given that, as septuagenarians, they fall in a demographic vulnerable to coronavirus (and Sanders twice so, given the heart attack he had in the fall). They pointed to virtual campaigning, washing their hands a lot, using hand sanitizer, not shaking hands and watching who they are spending time with.

As the evening wrapped up, Biden’s campaign team asserted that it was their best debate-night for fundraising so far in the race.

For Sanders, the way ahead in the race has grown narrow after Bidens’ series of wins. In a recent campaign update he highlighted the path forward only as far as the Sunday debate.

If Sanders’ strategy, as he did when facing Hillary Clinton in 2016, is to use his influence to pull the frontrunner left, he appears capable of doing it again. But with the nation in the grip of a crisis, it is hard to say how much voters are paying attention.

— With reporting by Philip Elliott 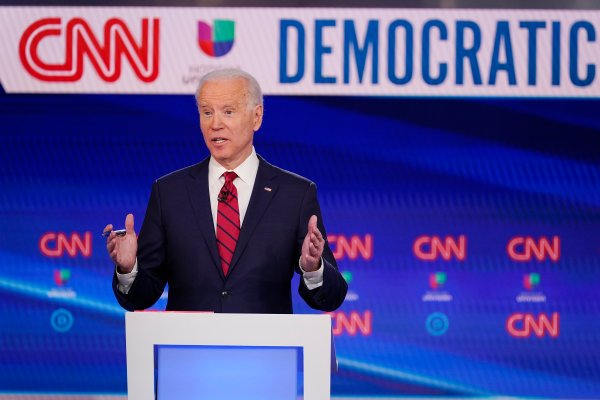 Biden Vows to Pick Woman VP
Next Up: Editor's Pick