Campaign staff and other gather inside the Huntington Convention Center after Democratic presidential candidate Sen. Bernie Sanders (I-VT) canceled his campaign event due to concerns about the coronavirus in Cleveland, Ohio, on March 10, 2020.
Chip Somodevilla—Getty Images
By Charlotte Alter and Lissandra Villa

By Wednesday, both Sen. Bernie Sanders and former Vice President Joe Biden had canceled multiple campaign events to stop the spread of the coronavirus. That means no chats with voters, no signatures and handshakes, no soaring optics of a cheering crowd greeting the presumptive Democratic nominee as he prepares to battle Donald Trump. The coronavirus has shredded the campaign playbook, which begs the question: How do you campaign in the time of the coronavirus?

Experts and strategists say cancelling events was obviously the right call, both for the safety of the septuagenarian candidates and the greater public’s health. Large public gatherings are being banned in some parts of the country as officials try to stop the virus’ transmission. An infection for Biden, 77, Sanders, 78, or President Donald Trump, 73, could be deadly for any one of them, and if one of their supporters got sick coming to see them, it could become a major scandal.

Slowing down the pace of big public appearances could be a blessing in disguise, particularly for the Biden campaign. It gives his staff an excuse to keep him in more scripted settings to avoid the gaffes and apparent “senior moments” that periodically go viral at a crucial turn for his candidacy in the 2020 race. “If you’re a campaign that has always looked for controlled moments, then this gives you the excuse you need,” says progressive strategist Rebecca Katz. On Super Tuesday, Biden easily won several states that he had never campaigned in, suggesting that he may not need big rallies to win support.

For Sanders, cancelling rallies is more of a mixed bag. Sanders has counted on big rock-concert style events to demonstrate his strength and to rev up his young supporters. “This is a candidate who people flock to, who can get tens of thousands of people to his rallies, that’s how he shows his strength,” says Katz. “It’s hard to show your people power when your people may not be able to leave their house.” Luckily for Sanders, he has a massive in-house livestreaming operation he will be able to use as a crutch.

After his campaign event was cancelled on Tuesday night, Sanders’ spokesman, Mike Casca, put out a statement saying that “All future Bernie 2020 events will be evaluated on a case by case basis.” His campaign did not respond to multiple questions about how it would change due to coronavirus, but at one roundtable he held on the subject this week, Sanders was reportedly asked what he was doing to take care of himself. He did not have a good answer, and the doctor sitting next to him elbow bumped him to show that they don’t shake hands. “There we go, alright, OK,” Sanders said and moved on. It is unclear whether he has stopped shaking hands outright.

Removing the human touch makes it harder for candidates to connect with voters. “Fundamentally, campaigns are about touching people,” says Jared Leopold, a Democratic strategist who worked on Gov. Jay Inslee’s presidential bid. “The idea of a campaign without handshaking and big crowd events would be a fundamental change to the way every presidential campaign has been run.”

Cancelling rallies also prompts questions about what a major political rally actually does, and whether there are other ways to get the same effect. “In a world where Joe Biden won some states without ever setting foot in them, there’s a legitimate question about how much value rallies had to campaigns,” says progressive strategist Adam Green, co founder of the progressive PCCC. “What was the actual value of your rallies? Were they mostly the converted? Were they signing up volunteers?”

“The three areas I can think of that it would have value: converting undecided voters, getting passionate people to actually volunteer, and local media coverage,” he continued. “It seems like you could probably find workarounds for most of those.”

Those workarounds might include boosting up digital presence, investing in new ads, and focusing on media blitzes in upcoming states. All of those strategies help candidates reach voters, but they can’t telegraph mass appeal, particularly with the geographic specificity of a rally.

Still, campaigning without major events could also have some unexpected benefits for campaigns with near-octogenarian candidates. “Honestly, with major party nominees in their 70s, this must come partly as a relief to their campaigns,” says Lis Smith, a top strategist to former presidential candidate Pete Buttigieg. “Campaigns are really taxing and this reduces the need for exhausting amounts of travel and energy consuming events.”

Trump, in particular, will be under scrutiny for how he proceeds in his campaign, as his administration has come under fire for its response to the outbreak. On Tuesday, Trump’s campaign announced plans to bring together Catholic supporters of Trump at a convention center in Milwaukee, Wisconsin on March 19. A few aides inside the White House believe that Trump should consider cancelling large events for the immediate future, especially since the President doesn’t need to be campaigning aggressively at this point in the calendar.

“We don’t have an election coming up,” says one White House official, pointing out that there are many months between now and the general election on Nov. 3. “It’s O.K. to take a break.” By Wednesday night, he had cancelled upcoming events in Colorado and Nevada.

Campaigns have always been interrupted by events outside of candidates’ control. The 2008 financial collapse occurred in the midst of that year’s presidential campaign, and various tropical storms which have derailed the best-laid campaign plans. Usually, it’s an opportunity for candidates to demonstrate their presidential leadership style in the face of an unexpected calamity. “In every election, there is a major national or international issue that the non-incumbent can use to publicly play President and give the public a taste of the imagery and activity they’d expect if elected,” says John Legittino, the production director for Mitt Romney’s campaign in 2012.

And staffers from other 2020 candidates say the coronavirus slowdown is not so different from January of this year, when several top presidential contenders were stuck in Washington to vote on impeachment instead of campaigning in Iowa. The Warren campaign, in particular, relied on tele-town halls, earned media blitzes and social media to connect with voters when she couldn’t be there in person. Still, there’s nothing like a personal touch. “Not being able to do events in person definitely takes some of the magic out of campaigning,” says Warren spokesman Andrew Taverrite.

The two candidates still in the race are still planning to debate each other in Arizona on Sunday night after Sanders vowed to stay in the race, despite a narrowing path forward. On TV, the campaign will go on. But because of coronavirus concerns, they’ll be debating in front of an empty room.

— With reporting from Philip Elliott and Brian Bennett

Write to Charlotte Alter at charlotte.alter@time.com and Lissandra Villa at lissandra.villa@time.com. 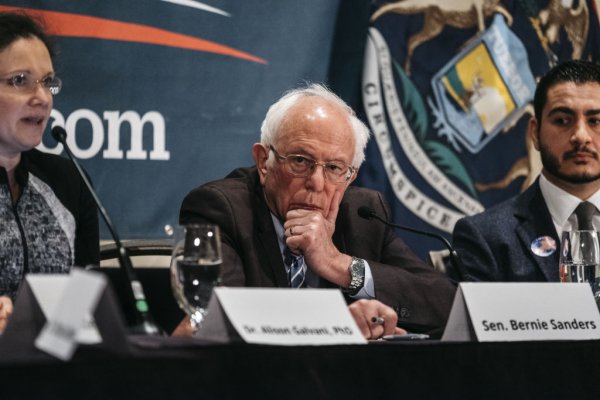 After String of Losses, Sanders Vows to Battle on
Next Up: Editor's Pick