Unbowed by Super Tuesday Defeats, Sanders Vows to Fight On

Vermont Senator Bernie Sanders made clear on Wednesday that his focus after Super Tuesday will be trying to draw a sharp contrast between himself and former Vice President Joe Biden in what has shaped up to be a two-person race.

Sanders vowed to fight on despite losing his delegate lead to Biden, who swept the South on Tuesday night in an evening that cast serious doubt on whether the Democratic party wants the revolution Sanders has promised. Sanders’ theory has been that he will be able to put together a diverse coalition and expand the electorate, but so far his game plan has fallen short.

“I think we go forward basically neck and neck,” Sanders told reporters at a press conference in Burlington. “What this campaign, I think, is increasingly about is, ‘Which side are you on?’”

Sanders is seeking to contrast himself with Biden on several issues, including their records authorizing military action in Iraq, which Biden voted in favor of as a Senator and Sanders voted against as a House member. He is also trying to distinguish himself from the former Vice President on healthcare: Sanders supports Medicare for All, and Biden’s plan is to build off of the Affordable Care Act. On Tuesday, as it became clear that the moderate faction of the party had coalesced behind Biden after the South Carolina contest, Sanders’ camp circulated a memo outlining which areas they saw as weak spots for Biden.

Despite winning the popular vote in Iowa, New Hampshire and Nevada, Sanders lost soundly to Biden in South Carolina, showing that he is still struggling to connect with black voters in 2020. And though he continued to be popular with Latino voters on Tuesday generally, he only won Vermont, Colorado, Utah and was projected to win California, which offers the largest delegate prize of the day’s contests. In suburbs like Houston’s, where moderate Democrats were worried about the potential fallout of having a self-described democratic socialist at the top of the ticket, the vote went to Biden. And the youth vote, which has been one of Sanders’ strongest demographics, has not been turning out in the droves he needs them, the Senator himself conceded.

Nonetheless, Sanders seemed eager to continue the fight, and with the massive grassroots fundraising ability he has demonstrated so far — $46.5 million in February alone — he is well positioned to stay in for the long haul. He has scheduled travel to Michigan, a Midwest state where he beat Hillary Clinton in 2016 but where Trump won in the general election. And he’s made fresh TV ad buys, including one that prominently features former President Barack Obama.

Asked at the press conference what he was hoping to accomplish with the ad, Sanders said, “I wanted to make it clear … to say that I’ve worked with him, that I respect him, that I look forward to working with him.” Biden famously has also evoked Obama as often as possible, but for Sanders, who often rails against the Democratic establishment, it was a notable departure from precedent, and a possible play to appeal to more centrist voters. Sanders added that he appreciates that Obama, who is reportedly holding off in his involvement to play a unifying role down the road, is trying to stay out of the primary.

When asked whether he had asked for Senator Elizabeth Warren’s support, Sanders demurred, saying only that he had spoken with Warren earlier in the day and that she was considering her next steps after last night’s results, which left her with little by way of a viable path forward.

This could still be a long fight for the nomination. Sanders’ position has been that a candidate should still get the Democratic nomination if they have a plurality of delegates, but fall short of the number needed to outright win the nomination. His belief is that it would be inappropriate for the party to select a nominee other than who voters had indicated the most wanted. “I think that would cause massive dismay within the American people,” Sanders said. “My views have not changed on that.”

But his larger focus was clearly on Biden. “Does anyone seriously believe that a president backed by the corporate world is going to bring about the changes in this country that working families and the middle class and lower income people desperately need?” Sanders asked. Based on the results from Super Tuesday, this may not be the question voters are asking themselves. 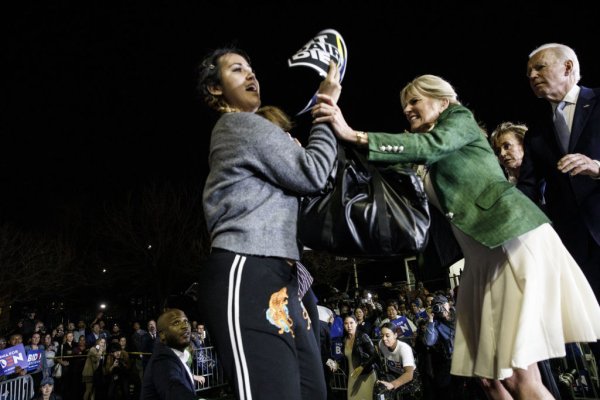 'Women Are Brave.' Jill Biden and a Top Aide Go Viral After Protesters Storm Rally Stage
Next Up: Editor's Pick