Can Bernie Sanders Win Over the Texan Suburbs?

Adrian Ozuna is sitting on a folding chair at the Chinese Community Center in Houston as the room empties out, the squeaks from sneakers on an adjacent basketball court becoming audible. Ozuna is the president of the Southwest Democrats — a club whose motto is “reflecting the diversity of Houston” — and he’s just finished running a forum for candidates in local races you’ve never heard of, including state House seats and county tax assessor-collector.

They’re not the kind of candidates grabbing national headlines as the 2020 presidential contenders slug it out for the Democratic nomination. But with Senator Bernie Sanders emerging as the party’s front-runner, they are precisely the kind of candidates many Democrats are worried about. Among party operatives and officials, there’s widespread fear that putting a self-described democratic socialist at the top of the ticket will jeopardize the slow but steady gains Democrats have made in recent years in red-state cities like Houston and its surrounding suburbs.

“There are a lot of areas [with] a lot of swing voters who will be turned off — who are turned off — by that message,” Ozuna says. Though Ozuna’s club has not endorsed a candidate, he said he is “cognizant” of concerns that Sanders could make it harder for local candidates. “We need to make sure that the voters who vote are on board.”

As Texans get ready to vote on Super Tuesday, Sanders isn’t just the leader in the polls. He’s a constant topic of discussion among moderate Democrats worried that his ambitious proposals, like Medicare for All, and his broader calls for political revolution could alienate voters in suburbs like Houston’s that voted blue in 2018 and helped Democrats win back the House. If moderate suburbanites who dislike Trump won’t vote for Sanders, it could reverse those gains.

“I’m concerned just about the gains we’re trying to make in Texas,” says U.S. Rep. Marc Veasey, who represents an urban and suburban congressional district that stretches between Dallas and Fort Worth, and who endorsed former Vice President Joe Biden. “We need nine seats to be in the majority seat in the [state] legislature, and I think Bernie being at the top of the ticket makes that path much harder.”

Veasey is especially worried about the label of democratic socialism, which he thinks voters in Texas will reject. “There’s not going to be enough explaining in the world that you can do to overcome that,” he says.

On the other hand, progressives argue that diverse cities like Houston are precisely the kind of place that voters would be willing to take a chance on an exciting candidate who can turn out the voters they need to turn this state blue.

That’s why Democrats across the country are watching places like Harris County, where Houston is located. It’s a fast-growing area that, until 2016, was considered the largest swing county in the nation. Now Democrats can comfortably say the area is trending blue, a fact that reflects rapidly changing demographics, with a population that is 40% Latino and nearly 20% black. The past two Democratic presidential nominees have won here by widening margins, and in 2018, U.S. Rep. Lizzie Fletcher won here, becoming one of two Democrats to flip a Texas congressional district.

Two days before Super Tuesday, a group of Democratic volunteers gathered at Torchy’s Tacos, a restaurant across the street from West University Place, an upper-middle class, well-educated Houston suburb that sits squarely in Fletcher’s congressional district. They were there to canvas for Kristi Thibaut, a candidate for Harris County Commissioner in the third precinct, who’s running on flooding-related issues, a chronic topic for the area, and improving infrastructure.

“Is [Sanders] my preferred candidate for this particular district? Probably not,” Thibaut admit. “Do I think it will really kill me? No.”

Thibaut’s political consultant is less circumspect. “I will tell you, Bernie’s a disaster in Texas if he’s the nominee,” says Keir Murray, sitting beside Thibaut. “Down-ballot candidates will be hard pressed to make gains; some recently elected incumbents will struggle to survive if he’s the nominee. He’s just not, I don’t think, the cup of tea for this state.”

But progressives in Texas say Sanders can help reach new voters that could be pivotal to the Democrats’ gaining new ground in the state. Mike Siegel, a progressive candidate running in Texas’ 10th congressional district, which abuts the Harris County suburbs, says he thinks Sanders is the best Democrat to power the party’s goals in Texas. “It’s just a very sophisticated, intersectional approach to campaigning, and it’s a very bottom-up strategy for each community,” Siegel says. Siegel nearly flipped the seat he is running for in 2018, and thinks that this time he will find success because of continuity in message and a more sophisticated operation. He believes the same is true for Sanders.

Siegel and other progressives also point to former U.S. Rep. Beto O’Rourke, who came up a few points short in his bid for Senator Ted Cruz’s seat in 2018, as evidence that there is a home in Texas for progressive ideas. O’Rourke, who also ran a failed presidential campaign this cycle, drew out a lot of new voters in his Senate run and came close to beating Cruz on what was considered by many in the Democratic establishment to be too progressive of a platform for such a red state.

Democratic organizers in Texas often say, “Texas is not a red state. It’s a non-voting one.” Sanders’ strategy of trying to motivate new voters, including Latinos, meshes with what Democrats have already been trying to do in Texas. Texas Organizing Project, a progressive grassroots organization whose core constituencies are black and Latino voters, estimates there are half a million eligible but unregistered voters of color in Harris County, one of several they have a presence in. They’ve been working to turn them out for a decade and say they’re starting to see an impact. In 2018, for example, progressive Lina Hidalgo, who the group organized for, was elected as Harris County judge in an upset victory over an incumbent Republican. Hidalgo is the first Latina and woman to serve in that position.

In February, Sanders got TOP’s endorsement. “He excites people,” says Mary Moreno, TOP’s communications director. Days before the state votes on Super Tuesday, the Houston office is busy with volunteers phone banking and getting ready to go out and canvass for down-ballot candidates. “It’s not enough that people are afraid of Trump or don’t like Trump, right?” Moreno adds. “We need someone they can vote for, somebody who they’re excited about. And I think that’s what Bernie Sanders does. People are excited to vote for him.”

Whether they share that enthusiasm or are anxious about Sanders’ long-term impact in local politics, most Texan Democrats agree on this: They want President Donald Trump out of the White House. Getting behind the Democratic candidate, whoever it is, will be key to making that happen, says Erika Rocha, the Texas State Director for Swing Left, a group working to flip swing areas blue.

Rocha says she doesn’t know what the effect would be on other Democrats if Sanders is the nominee. “We’ll have to see what that looks like when people cast their ballots,” she says. “Unifying in support of the eventual Democratic nominee is going to be for everybody up and down the ballot.” 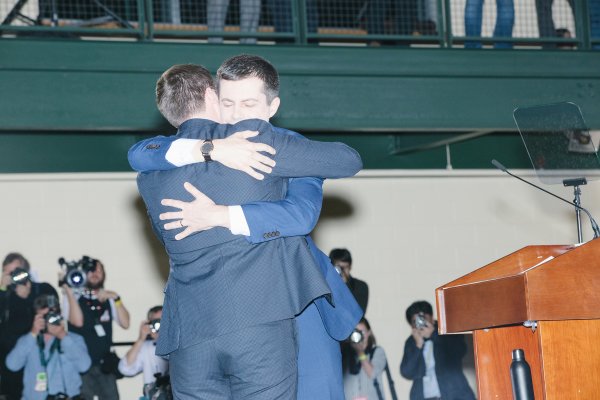 Buttigieg Falls Short But Leaves Race a Star
Next Up: Editor's Pick