How Bernie Sanders Is Working to Win Over Black Voters

Nina Turner is sitting in a back room of a Bernie Sanders field office littered with campaign literature and cookies. It’s the day before the South Carolina primary, and the former Ohio state senator is fresh off an hour and a half drive through the heart of the state. There’s a loud group of supporters outside, waiting to hear Turner make the case for a revolution as she introduces Sanders, the 2020 Democratic primary frontrunner.

If you follow Sanders, you know that Turner, one of his national campaign co-chairs, is a star in his movement. She’s constantly asked for selfies. Crowds scream that they love her (and she loves them too!). She’s got a talent for reeling in the audience, regardless of where she is. And she’s played a major role in organizing the campaign’s effort in South Carolina, where in 2016 Sanders got crushed by Hillary Clinton, especially among the African American voters who make up the majority of the Democratic electorate here.

“The main difference between last time and this time is time,” Turner tells me. “I can 100% guarantee we are going to do much better than in 2016, and I do believe we have a shot to win in this state.”

After winning the most votes in the first three states, polls show that Sanders is likely to lose here to former Vice President Joe Biden. But the Sanders camp has invested in South Carolina. The Senator has spent much of the week campaigning here, hoping a show of force in South Carolina, which has its own political rhythm, would help make the case that Sanders can do well anywhere, particularly when so much of the case against him rests on the perception that someone as far left as him can’t build the diverse coalition required to win.

When Sanders first ran for president in 2016, he was criticized for not knowing how to connect with black voters, and struggled to overcome the advantage Clinton had with name recognition. He was interrupted by Black Lives Matter protesters (though his surrogates, like Turner, note that all presidential candidates were interrupted by the movement). In South Carolina, he lost to Clinton by 47 points. An exit poll showed he won only 14% of the black vote in the state, a result that slowed the momentum he had coming out of Iowa and New Hampshire. He eventually admitted that his campaign had been “too white.”

This cycle, the situation is different. Sanders has pledged to build a “multiracial, multigenerational movement.” He’s diversified his national campaign staff, met with Black Lives Matter representatives, embarked on a campaign swing through the south led by Poor People’s Campaign activists and prioritized HBCU’s in the campaign’s student organizing efforts.

All this has helped Sanders shore up support among black voters, although the size of his gains remains an open question. Polls show Sanders is hovering around 20% in South Carolina, but he still lags Biden among black voters. A recent Monmouth University poll had Biden at 45% with African Americans in the state and Sanders at 13%, in a much bigger field than 2016. In Nevada, one entrance poll showed he had won 28% of black voters.

The progress has come in the wake of a consistent presence in the state. Turner said Sanders has made at least 16 trips himself, not counting a strong surrogate presence. “You can, like, quadruple that for me,” she says.

Turner has been one of Sanders’ most prominent national surrogates and a trusted adviser. Because she’s black, she’s also been able to help bridge the gap between Sanders and the black voters who rejected him in 2016. In our conversation, she placed emphasis on having credible people on the ground making the case for him. Some of this she’s been able to do herself, like in an op-ed that appeared under her byline last month, arguing that Biden had “betrayed” black voters.

Last year, the campaign started placing ads in radio and newspaper outlets whose audiences are predominantly black to promote campaign events. Sanders’ willingness to meet people where they are, trading some of the large rallies for more intimate events, has been noticed by locals. “You can see a very concerted effort, and I think that it is one of the reasons that he has been able to put pressure on former Vice President Joe Biden in South Carolina,” says South Carolina Democratic Party Chair Trav Robertson. “It appears the Sanders campaign has had the ability to not only learn from 2016, but has adapted, and they’ve implemented those changes. I think it’s benefiting him very much.”

At events in South Carolina this week, Sanders has lingered on issues like criminal justice reform. “We do not want to live in a country which has more people in jail than any other country on earth. Over 2 million people in jail, disproportionately African American, Latino, and Native American,” Sanders said at a rally Thursday night at Wofford College in Spartanburg. “That is why we are going to invest in our young people, in jobs, in education. Not more jails and incarceration. It costs more money to keep somebody here in jail than to send them to the University of South Carolina. I’d rather send them to the university than keep them in jail.”

Desiree Goldsmith, a 34-year-old from Seneca, pointed to the comment as an example of Sanders focusing on an issue that not all candidates would. “I think he’s made a change,” Goldsmith, who supported Sanders in the 2016 primary, says after the Sanders event. Another voter, Daquane Johnson, a student at Wofford, pointed to Sanders’ history of protesting in the civil-rights movement as a reason he liked him.

Of course, no voting demographic is a monolith. Manuel Pastor, a sociology professor at the University of Southern California, predicted Sanders would do better with younger, black voters in states like California than he would in South Carolina, where the electorate tends to be more conservative in comparison. “It’s older, it’s more conservative, it’s more church going, it comes out of a Civil Rights tradition that is part of the South, and it is much more likely to think about going with a traditional candidate,” Pastor says.

It’s also a mistake, argues Briahna Joy Gray, the Sanders campaign’s national press secretary, to assume that a voting demographic, like black voters, only cares about issues that affect them. The campaign’s success, she says, has been in “connecting on a policy level” and discussing the systemic issues that have kept many Americans behind.

Even if his gains in South Carolina from four years ago turn out to be incremental, it’s clear that Sanders has managed to win over black activists this year in a way that’s striking compared to 2016. One co-founder of Black Lives Matter, Patrisse Cullors, co-endorsed Sanders and Massachusetts Sen. Elizabeth Warren. Sanders, argued Cullors, has shown a willingness to evolve. “He has transitioned, he has moved, and he has really decided that he’s going to stand on the right side of history,” Cullors told MSNBC.

And of course, Sanders’ success so far can only help. “I think people have begun to see him as the winner, and the one who can take us all the way to the White House,” says South Carolina state Rep. Ivory Thigpen, who endorsed Sanders. “Everybody loves a winner, so the fact that he’s won in all three states, just for most people that bodes well. But even beyond a winner, I think his message has begun to resonate with people.” 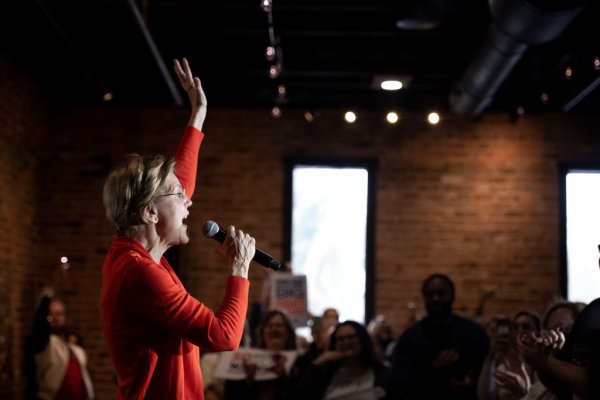