Bernie Sanders Wins Again in Nevada. Can He Be Stopped?

Sen. Bernie Sanders coasted to victory in the Nevada caucuses on Saturday, showcasing his strength with non-white voters in a win that tightens his grip on the Democratic presidential primary.

“I’m delighted to bring you some pretty good news,” Sanders said from a rally in Texas. “We have now won the Nevada caucus.”

It’s still very early in the primary, with less than 3% of pledged delegates awarded so far, but Sanders’ latest win raises the prospect that he could run away with the nomination. With Nevada under his belt, he now has the lead in pledged delegates to the convention. He boasts a die-hard base powered by young and working-class voters, his fundraising prowess is unmatched in the party and no single rival has emerged to threaten his standing atop the field.

But perhaps the best news for Sanders supporters is that Nevada may be the shape of things to come. As the first majority-minority state on the primary calendar, it was the first test of the Democratic candidates’ appeal to minority voters. Entrance polls before the caucuses suggested that Sanders was easily the top choice among non-white voters, earning the support of more than 50% of Latinos in what was effectively a seven-candidate race.

It’s a strong sign for Sanders’ prospects on March 3, the “Super Tuesday” contests when more than a third of total pledged delegates will be awarded. Among the states to vote on that day are diverse states like California, Texas and Colorado. (Nevada is nearly 30% Latino, while both California and Texas are nearly 40% Latino, and Colorado is more than 20% Latino.)

Tellingly, Sanders’ victory speech on Saturday included thanks to Make the Road Action, a national organization that works with immigrants, and rank-and-file union voters. The latter tribute was a not-so-subtle jab at the Culinary Workers Union, which did not endorse a candidate but did criticize Medicare For All, one of Sanders’ main policy proposals. Early indications showed those union members had overwhelmingly gone for him and broken with leadership.

The “multigenerational, multiracial coalition” his campaign put together, Sanders told supporters, was “not only going to win in Nevada, it’s going to sweep this country.”

That prospect has unsettled Sanders’ skeptics in the party, though they have been unable or unwilling to organize against him to this point.

“I will support the nominee, but I do not believe Bernie Sanders can win,” former Nevada Senator and Governor Richard Bryan, who endorsed former Vice President Joe Biden, told TIME in an interview on Friday.

By the time the race was called Saturday evening, the suspense was all but gone. In the days leading up to the caucuses, it was clear that Sanders was the heavy favorite—strong enough that he could afford to leave the state early to campaign in Super Tuesday states like California and Texas. And the signs of trouble for his rivals had been piling up.

Biden was interrupted during the primary debate on Wednesday by RAICES Action protesters demanding a “Migrant Justice Platform,” and one of his surrogates was pressed on the Obama Administration’s record of deportations at Amnesty International’s presidential forum on immigration and asylum on Thursday at the College of Southern Nevada’s North Las Vegas campus. A protester received loud applause when she volunteered in Spanish that her best friend, a trans woman, was deported to El Salvador and died during those years, and she demanded an apology.

Most of the top campaigns sent surrogates to the event, but Tom Steyer was the only candidate to appear in person. “It’s an important state for everybody, including me,” Steyer said Thursday about Nevada. “Look, Saturday’s really important to determine who actually can attract people, and South Carolina is an even more diverse state. It’s going to make even more of a statement of who can attract different parts of the Democratic party, who can talk to people and actually pull together a real coalition.”

Although Elizabeth Warren had a strong debate performance on Wednesday night, her allies were spinning a loss in Nevada before the results even came in. At one canvass launch on Thursday, one of her surrogates blamed the media for erasing her from the narrative. After Sanders was declared a winner, Warren’s campaign manager tweeted that Warren’s fundraising had gotten a boost. “We believe the Nevada debate will have more impact on the structure of the race than the Nevada result,” he said.

While Sanders’ rivals have mostly declined to take him until now, Nevada could prove to be a turning point. In a speech Saturday evening, Buttigieg took shots at Sanders, claiming that he believes in an “inflexible, ideological revolution that leaves out most Democrats.” Mike Bloomberg, who debated for the first time in Nevada but did not compete in the state, put out a statement ringing the alarm about a “fragmented field” benefiting Sanders, calling him the “candidate who just declared war on the so-called ‘Democratic Establishment.'”

Now his rivals may be awakening to the prospect that he may be right. 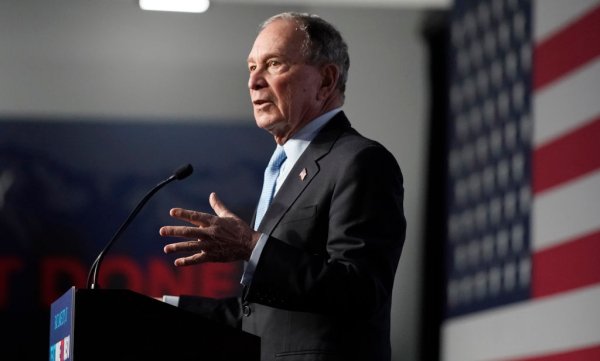