Michelle Obama spent 2008 campaigning for her husband Barack, experiencing a level of scrutiny that was undeniably linked to her race and would persist for years to come. That August, she delivered a stirring address at the Democratic National Convention in which she talked about the “improbable journey” from her working-class Chicago upbringing to that very stage. Speaking of her young daughters, she shared that “their future—and all our children’s future—is my stake in this election.”

After her husband won, she gracefully stepped into the role of First Lady as the first black woman to do so. Focused on social issues like education and healthy living, she was deeply committed to the well-being of our nation and to the future of its people, especially its children. Her charisma, confidence and openness created an approachable air to the White House. Though her days as First Lady are over, her influence hasn’t waned. Her lived experience sends the message that through kindness, diligence, intelligence and honesty, you can effectively change the world. If she can do it, you can do it too. —Zazie Beetz

Beetz is an actor 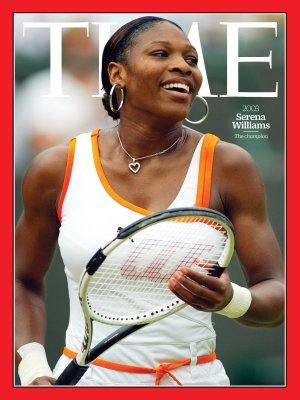 2003: Serena Williams
Next Up: Editor's Pick