Former First Lady Michelle Obama says “the small things” are what she appreciates most about life after the White House.

“It’s opening up my door and walking out and enjoying the weather and sitting on my patio,” she told NBC’s Today show Thursday. “It’s going to my girls’ game and just really being a mom.”

She also spoke about how she and former President Barack Obama have managed life “out in the real world” 21 months after leaving the White House.

“One of the keys to a successful marriage is separate bathrooms,” she said. “When he enters my bathroom sometimes I’m like, ‘Why are you in here?’ And he’s like, ‘I live here, can I enjoy my bathroom too?'”

The former First Lady has recently stepped up her public engagements after a period out of the spotlight. On Thursday she launched education initiative the Global Girls Alliance, and in November she begins a 10-city tour to promote her upcoming memoir Becoming.

She told Today that the book sheds light on her fears for her daughters in the early days of the Obamas’ eight years in the White House.

“It took me several months in the White House before I could take a deep breath because I knew that this transition wasn’t gonna take them out,” she said. “I thought, what on earth are we doing to them?”

“They’ve spent the majority of their life in the international spotlight, with all the criticisms and the judgements,” she said. “But they are down to earth, they are humble, they are normal. It has been a huge relief.” 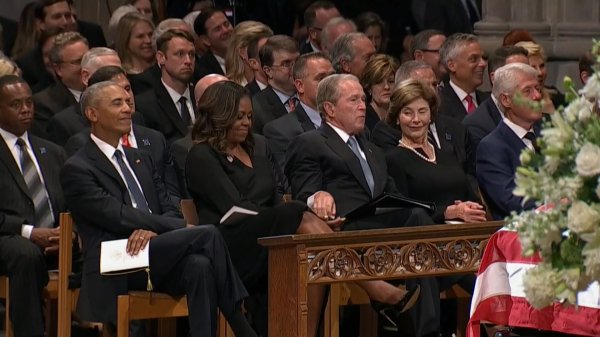 Michelle Obama Reveals What Really Happened During Her Sweet Exchange With George W. Bush
Next Up: Editor's Pick