When Amelia Earhart settled into her airplane on Jan. 11, 1935, ready to set off on an unprecedented solo flight across the Pacific Ocean, the aviator wasn’t just thrilling her fans. She was defying those who continued to believe that a woman’s place was in the home – not the office, not the factory, not the pilot’s seat.

In the days before she planned to fly 2,400 miles from Hawaii to California, an open letter urged her to stand down, noting that ten others had died trying. Despite poor weather in Honolulu, she pressed on, and about 18 hours later she was landing in Oakland, becoming the first person, woman or man, to perform the feat.

Two years later, Earhart would fail to complete an even more dangerous attempt to fly around the world. But her grit and derring-do, on full display as thousands of cheering supporters swarmed her plane that day in Oakland, forever expanded expectations for just how far the fairer sex could go. “Women must try to do things as men have tried,” Earhart once said. “When they fail, their failure must be but a challenge to others.” –Katy Steinmetz 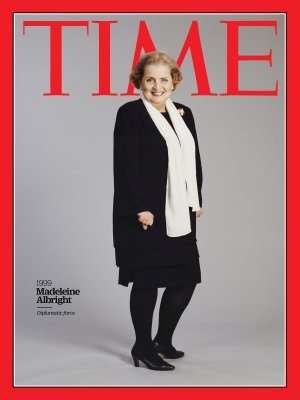 1999: Madeleine Albright
Next Up: Editor's Pick