Thousands flocked to her memorial service. Millions listened in shock as it was reported: “Sister” Aimee Semple McPherson, the nation’s most famous evangelist of the era, it seemed, was dead.

A Pentecostal preacher with a knack for publicity, McPherson gained national fame for traveling the U.S. in a car painted with Jesus Is Coming Soon—Get Ready, delivering passionate sermons and faith-healing demonstrations. Thanks to the new medium of radio, she preached in people’s homes too. By 1926, she had founded a Bible college and established what would become one of the first mega-churches, the International Church of the Foursquare Gospel in Los Angeles, which has branches around the world today. Her sermons regularly drew crowds of as many as 30,000.

A month after her reported death in May 1926, McPherson reappeared, claiming she’d been abducted. News of her “resurrection” created media madness. Whether the alleged kidnapping was a publicity stunt is up for debate. What isn’t is that she blazed a trail for other religious figures. Her groundbreaking mix of cutting-edge media and old-time religion set the stage for televangelism and religious celebrity in the decades to come. —Erin Blakemore 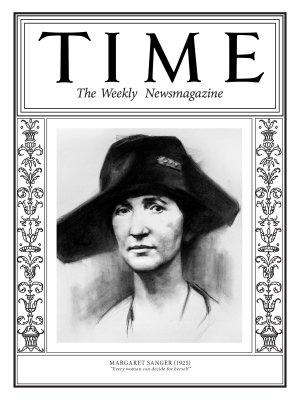 1925: Margaret Sanger
Next Up: Editor's Pick