20 Things You Never Knew About Clueless

Poster for the movie 'Clueless,' 1995.
Buyenlarge/Getty Images
By Sarah Begley

Two decades after its premiere, Clueless is still keeping it real. The modern classic is being feted with a vinyl rerelease of the soundtrack, a new musical and a book, As If!: The Oral History of Clueless as Told by Amy Heckerling, the Cast, and the Crew. The compilation of interviews by Jen Chaney, out July 7, details everything that went into making the film, from casting to costumes. In honor of the anniversary on July 19, we rounded up 20 of the most fascinating facts from the book.

1. Writer/director Amy Heckerling’s grandparents were like Cher and Josh.

Studio executives were concerned that Cher and Josh’s relationship would read as too incestuous, but Heckerling couldn’t really see it. “The thing is,” she says, “my grandparents were stepbrother and stepsister.” Their parents had married after the deaths of their respective spouses, so her grandparents were teenagers when they met. “I mean, it’s the Jewish ghetto. You don’t leave a woman out on the street, because she has no money and how will she feed the kids? Widowers marry widows and that’s how it is, and [their respective children] are not related.”

Fox had decided not to produce the movie, and things were looking grim until producer Scott Rudin signed on. “It became an important film the moment he signed on to produce it,” said coproducer and unit production manager Barry Berg.

3. Heckerling wanted Alicia Silverstone because of those Aerosmith videos.

“I was watching an Aerosmith video of ‘Cryin,'” she said. “That was the first video she was in. And I just fell in love with her. Then my friend Carrie Frazier, who’s a casting director [and] who was [casting it] when we were doing it at Fox, said, ‘You have to see this girl in The Crush.’ And I was like, ‘No, I want the Aerosmith girl.’ Well, it was the same girl.”

4. Several other high-profile actresses were considered for the role.

Not all of them necessarily auditioned, but Heckerling was also encouraged to consider Keri Russell, Gwyneth Paltrow and Angelina Jolie.

5. And Lauryn Hill was in the running for Dionne.

But Stacey Dash was pretty confident. “I knew it was my role,” she said.

6. Mr. Hall was based on a real-life Beverly Hills teacher…

Named Mr. Hall. He ended up playing the principal in the movie.

7. Breckin Meyer did a lot of his own skateboarding stunts as Travis.

He injured himself shooting the half-pipe scene.

He got everyone a necklace with their name written on a grain of rice.

The set dressers tried to put some of the clothing she would actually wear in the film in the fancy dry cleaners-style closet at the beginning of the movie.

It was one of the few pieces costume director Mona May had the budget to splurge on.

11. Silverstone got to keep most of her wardrobe.

But before you get totally jealous, you should know that she thinks she gave it all away.

12. Paul Rudd wore a lot of his own clothes.

“I had an extra tooth,” he said, “and they wanted to hide that because it kind of looked weird when I smiled. So they put braces on me.”

Cher’s classic mispronunciation of the word “Hay-tee-ans” was not written into the script. When the actress flubbed it on set, Heckerling says, “the script woman and everybody started to run toward her to correct her and I had to block them all. I was like: ‘Stay away from the actress.’ She needed to have that assurance that she was saying it right. There’s a cockiness to Cher when she’s just going down the wrong track, and you just have to make sure people don’t mess with that.”

Heckerling didn’t write a last name into the script, so when Shawn, as Mr. Hall, was handing out tardy slips in a scene, he ad-libbed “Horowitz.” If you look closely, you’ll see her report card reads “Cher Hamilton.”

16. The extras making out in the pool at the Valley party ended up getting engaged.

Heckerling and her assistant directors asked if two extras would volunteer to play a couple in the swimming pool. Two people said yes. “Years later,” she says, “I was walking down Melrose and I hear some people going, ‘Amy! Amy!’ And I turn around, and it was them. They met that night. They’re engaged…I don’t know how that marriage worked out, but it was really sweet.”

17. Cher’s hair clip from the concert scene showed up in another teen movie.

Lead hairstylist Nina Paskowitz kept the barrette Cher wore on a pegboard that she would bring to other shoots, and several years later, she ended up doing Amanda Bynes’ hair for She’s the Man. “I said [to Amanda], ‘You know, I put this clip in Alicia’s hair in Clueless.’ She’s like, ‘Oh my God, that’s my favorite movie.’ She started screaming. I said, ‘Would you like to wear it in the scene?’ And she almost had a heart attack she was so excited and honored.”

18. Silverstone napped in the driver’s seat between takes in the DMV scene.

“I was just supertired and trying to sleep whenever I could,” she said.

19. Cher’s revelation in front of the fountain that she loves Josh was inspired by Gigi.

“In Gigi,” Heckerling says, “when [Gaston] decides, ‘Wait a minute,’ and he’s walking and he’s silhouetted and then he turns around and [there’s] the color and the fountain: of course, that’s France and this is Wilshire Boulevard. But I wanted that.”

“If I was going to get married,” said actress Twink Caplan, who was close friends with Heckerling, “Amy would have been my maid of honor. She edited most of herself out and she was shy, you know, to be on that side of the camera. But she did it for me and I loved it.” 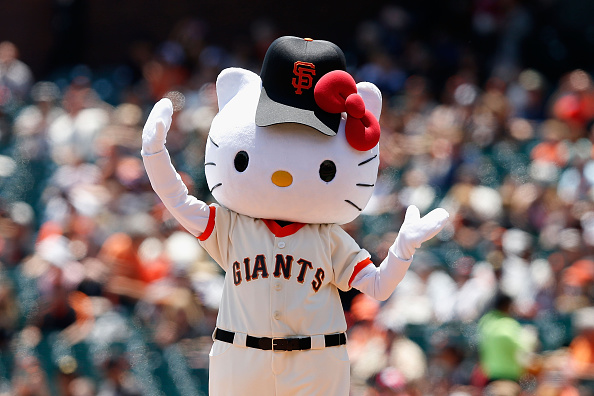 Hello Kitty Movie Targeted for 2019
Next Up: Editor's Pick