The 2020 Oscars was worth watching for several reasons, especially when Billie Eilish wordlessly expressed her feelings in the moment throughout the evening.

She was in attendance at the 92nd Academy Awards to cover “Yesterday” for the memoriam performance, and each time the cameras panned to the “Bad Guy” singer in the crowd, she had a reaction. It would be fair to say she stole quite a bit of the spotlight with her slightly perplexed facial expressions.

In fact, her facial expressions were a gift to the pantheon of awards show GIFs. As she reacted authentically to various things, memes came in strong and they came in immediately.

As the cameras panned to Eilish quite often throughout the telecast, she outdid herself every time. The most popular clip on Twitter was a snapshot of her reacting to Maya Rudolph and Kristen Wiig’s fun Best Production Design and Best Costume Design presentation that saw the comedy powerhouses cycling through charming satirical numbers. But look! There she was reacting to Eminem’s surprise performance of “Lose Yourself” that truly appeared to a surprise a number of people in the crowd. This reaction was another all-night favorite.

It is of course entirely possible that Eilish was reacting after noticing the cameras on her at these points in the production.

One simply doesn’t know what someone in attendance at the Oscars is truly thinking or feeling, and we may never know. Just ask Jennifer Garner. And in the case of Winona Ryder’s noteworthy face journey at the SAG awards, chalk it all up to the acoustics.

But we do know one thing: Her face launched plenty of memes, and they can be very useful. See a sampling of 2020 Oscars Billie Eilish memes below. 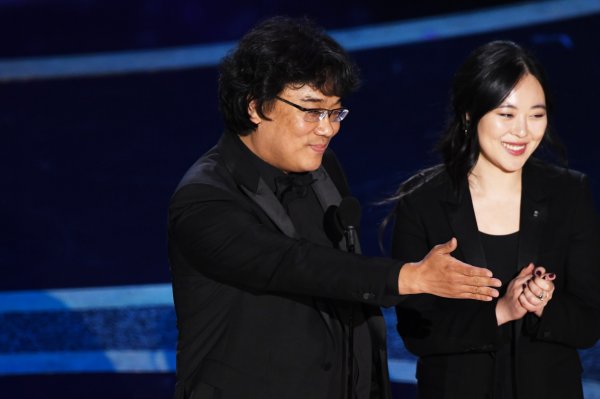 The Best, Worst and Most Chaotic Moments of the 2020 Oscars
Next Up: Editor's Pick