In 2018, Saudi women took to the streets around the country, permitted to drive cars themselves for the first time. That same year, unrelated men and women were allowed to mix at a Formula-E car race and concert extravaganza, listening to DJ David Guetta and the Black Eyed Peas—unthinkable not long ago in a country where religious police used to enforce a strict separation of the sexes.

That’s part of the raft of highly visible social reforms that Saudi Arabia has launched in recent years as the Kingdom tries to reposition itself as a modern global economic powerhouse. But you don’t have to look far to see a very different country, where officials plotted the violent murder of The Washington Post’s Jamal Khashoggi, where a young Saudi Air Force officer studied before deploying for training in Florida where he shot three U.S. Navy Airmen last fall, and where millions of children go to school every day and read state-sanctioned hate speech in their text books.

For a White House that seems to have given Saudi Crown Prince Mohammed bin Salman a wide berth on the first two incidents, the Trump Administration has been pushing hard behind the scenes for the last one to change. Since 2017, when President Donald Trump marked Saudi Arabia as a key regional ally, the Administration has seen the state’s textbooks — which teach a version of fundamental Islam so extreme it was used by the Islamic State — as a security threat and a key part of its efforts to fight terrorism.

Two new reviews of Saudi government textbooks show not much has changed, despite these efforts. In 2019, Saudi students were still being instructed to keep westerners at a distance, to consider Jews “monkeys” and “assassins” bent on harming Muslim holy places, and to punish gays by death. All those sentiments are included in text books that are required reading for Muslim children in Saudi Arabia from kindergarten through high school, according to a review by Jerusalem-based Institute for Monitoring Peace and Cultural Tolerance in School Education, or IMPACT SE, a nonprofit whose research has been cited by the UN and the Anti-Defamation League.

A second organization highlighted similar disturbing material. “Students are being taught that Christians, Jews and other Muslims are ‘enemies’ of the true believer, and to befriend and show respect only to other true believers, specifically the Wahhabis,” the strict sect of Islam upon which Saudi Arabia was founded, says Ali Al-Ahmed of the Washington, D.C.-based Institute for Gulf Studies, in a preview for TIME of his own meticulous review of the 2019 textbooks due out in March. The two groups have shared their results with U.S. government officials.

Both reviews acknowledge there have been some changes to the Saudi curriculum, designed to appease the Kingdom’s western critics. Al-Ahmed notes that in one passage, the phrase “Christians and Jews” has been replaced with phrase “the enemies of Islam,” but says other parts of the same textbook make clear that Christians and Jews remain in the ‘enemies’ camp. Marcus Sheff, CEO of IMPACT SE, says some of the most notable changes in the curriculum fit in the Crown Prince’s ambitious modernization plan for the country, called Vision 2030, such as depicting women as entrepreneurs. “But they are encouraged to be entrepreneurs while not befriending westerners they would do business with,” Sheff adds.

The slow pace of change and the Saudi government’s refusal to do more has been a source of disappointment to Trump, a senior administration official tells TIME. Trump joins a long line of U.S. leaders, UN bodies and human and civil rights groups that have been pressuring the Saudi government for decades to stop proselytizing its harsh version of Wahhabi Islam, spread inside and outside the Kingdom by its clerics’ sermons online or given in mosques that Saudi money built. The government freely distributes hundreds of thousands of Wahhabi Qurans around the world, and makes its school textbooks freely available on the internet. Since the attacks on New York and Washington, D.C., largely by Saudi-born jihadists, every administration that has occupied the White House has asked the Saudi government to revise what it teaches its children, with only glacial change as a result.

Trump Administration officials say they’ve been working in private to point out the dangers of this kind of hateful language to Saudi officials, but they are reluctant to publicly criticize Riyadh’s foot-dragging. “We can’t just demand from a sovereign nation ally an immediate fix,” a second senior administration official told TIME. “The Saudis are crucial to our national security efforts in the region, mainly those in places like Yemen… They have provided us a lot of support in those fights that we share.”

The Bush and Obama Administrations also kept similar critiques behind closed doors, according to Farah Pandith, who served in both administrations and was appointed first-ever Special Representative to Muslim Communities. “They were our partners in the post-9/11 context in fighting al Qaeda. We wanted to do this in a way that allowed them to keep a little bit of dignity but also show leadership,” she told TIME. “It should not be others forcing them to do the right thing.” She says the Saudi government has dismissed some of the more extreme preachers and taken some of their most hate-filled sermons off the internet, but much of the material is still accessible, including in the national curriculum. “It’s a question of scale. I traveled to 80 countries as representative to Muslim communities. None has more influence than the Saudis.”

Saudi critics like Al-Ahmed say the curriculum is perpetuating extremist violence, including the actions of Saudi Second Lt. Mohammed Saeed Alshamrani, 21, who is accused of opening fire on U.S. personnel at Naval Air Station Pensacola on December 6th, killing three Navy Airmen and injuring eight. Alshamrani, an officer of the Royal Saudi Air Force, had armed himself with a legally purchased 9mm Glock handgun, only days after reportedly showing videos of mass shootings to other Saudi students training at the base as part of a longstanding U.S. military training program.

Terrorism expert Mia Bloom says the material Alshamrani would have ingested at school back home was so extreme that the State Department found it was used by the Islamic State during its reign of terror in Iraq and Syria. “Until ISIS started publishing their own ‘Al-Harouf’ series of children’s textbooks, ISIS used Saudi textbooks in their schools to train the cubs of the caliphate,” Bloom told TIME, a subject she detailed in her 2019 book, Small Arms: Children and Terrorism. “The Saudi textbooks promoted a view of the world that was virtually indistinguishable from ISIS ideology: hatred of the west; hatred of other Muslims, that are not Sunni; hatred of Jews and antagonism towards women.” Al-Ahmed says the Saudi officer would have had to prove mastery of such malevolent material to rise in the military ranks.

None of the Trump Administration officials would go so far as to blame such lessons for the Saudi officer’s alleged actions, but they concede if the education had been reformed shortly after 9/11 in 2001, when Alshamrani would have been around two years old, it may have helped. “Unfortunately, Pensacola is a reminder — a harsh one — of work left undone,” an administration official said.

“You could go back to 2001,” a second senior official added, referring to the attacks that killed more than 3,000 Americans. “If they had changed their textbooks in 1975, we’d be in a better spot.” The administration officials interviewed for this article spoke on condition of anonymity to brief TIME on their sensitive discussions with the Saudi Kingdom over the issue.

Among the gradual changes IMPACT SE notes in the 2019 Saudi textbooks include striking several references of Christians as “pure infidels” or unbelievers, and removing the statement that “Christianity in its current state is an invalid and perverted religion.” The Christian faith is no longer defined as a “colonial religious movement that subjected Muslims to Western ideas and stopped the spread of Islam,” the report said, all of which are positive changes if your number one supporter is President Trump, whose base is largely made up of evangelical Christians.

Also deleted is the claim that the “Protocols of the Elders of Zion” are “a secret Jewish plan to take over the world,” and that Jews believe the world was promised to them and that it’s their right to control it. But Zionism is still described as a racist movement that uses money, the media, drugs, and women to achieve its goals, according to IMPACT SE’s review.

A Saudi official told TIME that the Kingdom “is implementing a comprehensive program to reform and improve all its educational institutions,” which include “ongoing” reforms to the textbooks. The official declined to comment on an advance copy of IMPACT-SE’s report made available to him by TIME.

Amb. Nathan Sales, the State Department’s Acting Under Secretary for Civilian Security, Democracy, and Human Rights, asked the Saudi government to make further changes to the textbooks, but was rebuffed, a senior administration official told TIME. The State Department declined to comment on Sales’ interaction, but a senior State Department official said that “the Saudi government has worked to modernize the educational curriculum in public schools” but that “some textbooks containing derogatory and intolerant references to Shia and non-Muslims remained in use.” Both officials spoke on condition of anonymity to describe the friction with the Kingdom.

Administration officials are still hoping for bigger reforms this summer, when the government publishes the 2020 edition of the K through 12 textbooks.

Pandith says the textbooks aren’t the only thing that needs changing, as the hundreds of thousands of Saudi Qurans distributed around the world also portray Wahhabism as the only true version of Islam. “If you want to demonstrate that you see the folly of what you did before…let’s do a buyback program,” she says, an idea she outlines in her 2019 book, How We Win.

“If MBS (the Crown Prince) wanted to overhaul the viewpoint that they are the only Muslims that matter, he could do it in a minute with the kind of government they have,” she says. “The choice to do it piecemeal means their heart isn’t in this endeavor.” 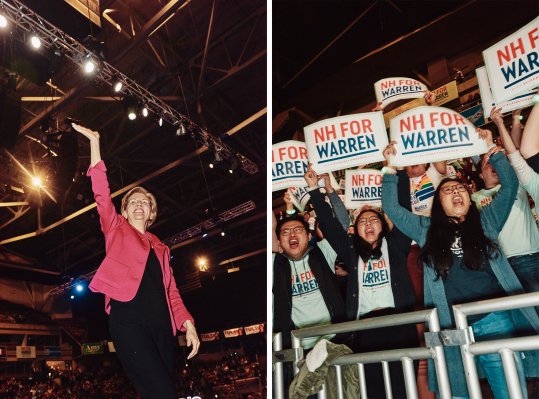 How Elizabeth Warren Plans to Turn Around Her Campaign
Next Up: Editor's Pick