President Trump Is Headed to Saudi Arabia. He Once Said It Wants 'Women as Slaves and to Kill Gays'

As President Donald Trump takes off on his first foreign trip in office, he’s set to go to Saudi Arabia, a nation he’s previously condemned for treating women like “slaves” and wanting to “kill gays.”

“Saudi Arabia and many of the countries that gave vast amounts of money to the Clinton Foundation want women as slaves and to kill gays,” Trump wrote in a Facebook post in June 2016 during the presidential campaign. “Hillary must return all money from such countries!”

During a presidential debate Trump also said Saudis were “people that push gays off buildings” and “kill women and treat women horribly,” according to the Washington Post. He has also claimed the Saudi government had ties to the September 11, 2001 terror attacks.

But Trump has moderated his tone since he became President. He met Deputy Crown Prince Mohammed bin Salman in March and has spoken to King Salman on the phone. And he will arrive in Saudi Arabia with a gift to cement the friendship — a massive package of weapons deals.

“I don’t think the Saudis are alarmed by the way Trump is behaving or his past remarks,” Toby Craig Jones, a historian at Rutgers closely studying Saudi Arabia, told TIME’s Jared Malsin. “I think they see this as an opportunity to roll back the clock a little bit. I think they see him as a moldable character.” 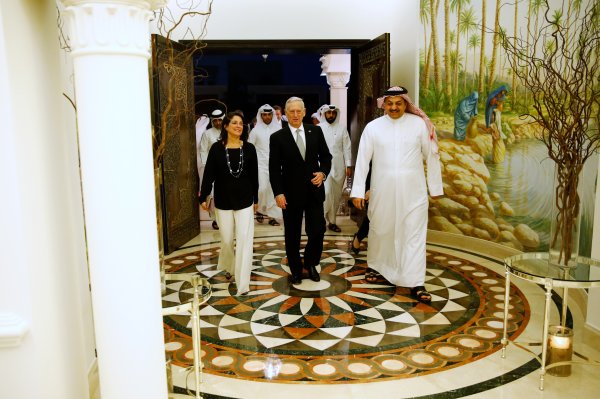 Ambassdor to Qatar Says U.S. News 'Difficult' to Wake Up To
Next Up: Editor's Pick