Greta Thunberg no longer has to worry about being heard on the issue the climate change, she told a room full of adults Tuesday at the World Economic Forum in Davos, Switzerland. “I’m being heard all the time,” she said.

The 17-year-old Swedish climate activist’s comment was met with chuckles from the audience, but her wry smile soon turned to a serious message. “In general, the science and the voice of the young people is not at the center of the conversation, and it needs to be,” she said. “Because this is about us and our future, and future generations, and of course those who are already being affected today.”

She added that “pretty much nothing has been done, since the global emissions of CO2 have not reduced” since she started staging school strikes to raise awareness of the climate crisis since August 2018.

Thunberg’s message, of young people demanding action rather than empty promises, was echoed by fellow youth activists on TIME’s panel at the 2020 World Economic Forum. Titled “Forging a Sustainable Path Towards a Common Future,” the event on Tuesday morning was moderated by TIME CEO and Editor-in-Chief Edward Felsenthal.

Thunberg was joined on stage by three other young activists who have worked to make a difference in their communities: Salvador Gómez-Colón, 16; Autumn Peltier, 16; and Natasha Mwansa, 18.

All four activists used the platform and the global stage of the World Economic Forum to emphasize that collaboration with political leaders should take the form of meaningful action, rather than merely lip service. “Even for me, people are awarding me,” said Peltier. “I don’t want your awards. If you’re going to award me, award me with helping me find solutions and award me with helping me make change.”

Peltier is an Eagle Clan Anishnaabekwe from the Wikwemikong First Nation in Northern Ontario, Canada. In 2019, she was named the Chief Water Commissioner by the Anishinabek Nation, representing 40 First Nations in Ontario, many of which lack clean drinking water. Peltier told the panel that the role, which was previously held by her aunt Josephine, means having a seat at the table when decisions are made and being able to advocate for the Great Lakes.

Gómez-Colón spoke of his moving experience distributing hundreds of solar lamps to Puerto Ricans without power in the aftermath of Hurricane Maria, and the power of youth resilience in the wake of natural disasters. “In Puerto Rico with all the fair share of natural disasters and political crises we’ve had, we’ve seen youth stepping up. Around the world, we’ve seen our generation standing up for the world we want to see, even when our leaders aren’t really taking charge,” Gómez-Colón said. “We’re not waiting five, 10, 20 years to take the action we want to see. We’re not the future of the world, we’re the present. We’re acting now, we’re not waiting any longer.”

Fellow panelist, journalist and women’s rights advocate Mwansa also emphasized the importance of including young people in decision-making. “Young people are no longer just seen as being young, we’re actually being involved in the whole system and we’re being asked what we want to do,” Mwansa, who is from Zambia, said. “The older generation has a lot of experience, but we have ideas, we have energy and we have solutions for the ‘now’ problems and the ones that are coming up.”

While Mwansa spoke of seeing hopeful and positive change as a result of collaboration between youth activists and older leaders, other panelists implored leaders to look to the example of young people and push for radical rethinking of systems of power. “I’d like to assume that our politicians right now will see the tide shifting and will see the work that we’re doing,” Gómez-Colón said. “I think people need to start thinking about how we can make our world a better place for everyone, and see ourselves, instead of through our borders, as citizens of the world.”

Thunberg took the opportunity to remind world leaders of the statistics outlined in the Intergovernmental Panel on Climate Change report released in October 2018, which pointed to a global temperature rise of 1.5 degrees Celsius as a threshold at which the planet would see the worst effects of climate change. The report warned that if the current rate of greenhouse gas emissions continues, the 1.5°C threshold could be passed as early as 2030.

“These numbers aren’t anyone’s political views, this is the current best available science,” said Thunberg, noting that the responsibility of removing CO2 from the air would fall heavy on future generations. “Every fraction of a degree matters. Since last summer, I’ve been repeating these numbers over and over again in almost every speech. But I don’t think I have once seen any media outlet or person in power communicate this and what it means. I know you don’t want to report about this. I know you don’t want to talk about this. But I assure you I will continue to repeat these numbers until you do.”

In December 2019, TIME recognized Thunberg as Person of the Year, making her the youngest person in the franchise’s history to be selected. “Thunberg’s wake-up call is a necessary jolt,” Felsenthal wrote about the choice. “It is up to us all to meet it with solutions.”

The discussion concluded with the activists urging for more support for youth movements, at a time when they appear to be gaining greater attention and momentum worldwide, from the protests against inequality in Chile to the pro-democracy protests in Hong Kong. “Even the fact that us youth have to be up here trying to create awareness and make change feels kind of wrong,” Peltier said.

Gómez-Colón added: “Just because we are all teenagers doesn’t mean we don’t have the maturity, the knowledge or the drive to take action and impart positive change in the world we live in.” 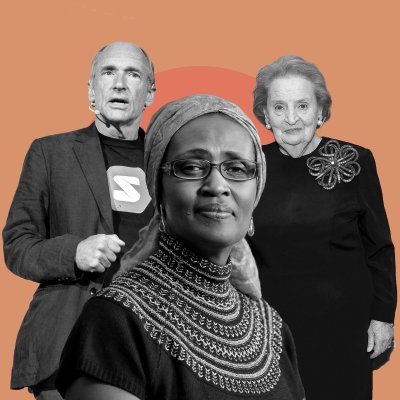 Letters to Young People Who Inspire Us, by Madeleine Albright, Michelle Bachelet, Tim Berners-Lee and More
Next Up: Editor's Pick