What Happens Next in the Chile Protests

A riot police truck fires water to demonstrators during the ongoing protests against policies of Sebastian Piñera and longstanding inequality on Nov. 15, 2019 in Santiago, Chile. Chilean lawmakers agreed on calling a referendum in April 2020 to replace the current constitution, which was written and approved during General Augusto Pinochet's military dictatorship in 1980. People will be asked if they approve the idea of a new constitution and if current lawmakers should work on the redraft of the document.
Marcelo Hernandez—Getty Images
Ideas
By Ian Bremmer
Bremmer is a foreign affairs columnist and editor-at-large at TIME. He is the president of Eurasia Group, a political-risk consultancy, and GZERO Media, a company dedicated to providing intelligent and engaging coverage of international affairs. He teaches applied geopolitics at Columbia University’s School of International and Public Affairs and his most recent book is Us vs. Them: The Failure of Globalism.

After a month of the most sustained protests Chile has seen since the end of its military dictatorship (1973-1990), President Sebastian Pinera delivered this week the ultimate concession—the offer to rewrite the country’s constitution. It’s a desperate move by Chile’s president to satisfy the ever-changing demands of protestors and buy himself some time; a plebiscite will be held in April 2020 to determine both whether Chileans want a new constitution (almost 80 percent of them do), and who will be the people responsible for drafting this new constitution.

In a world beset with all kinds of protests these days—over corruption, over climate change, over independence, over democratic freedoms—the ones taking place in Chile continue to stand out both for their intensity and as a sign of things to come. The immediate trigger to these protests was a 4-cent hike to metro fares, but the root cause underpinning the violence is widespread inequality. Authorities didn’t think that such a small fare hike in one of Latin America’s richest and most politically-stable countries would touch off a firestorm; but by the time Pinera got around to scrapping the metro fare hike, it was too late. He’s been playing catch-up ever since.

Among all OECD countries, Chile has the highest levels of inequality, offering a troubling glimpse of a future where trendlines show the divide between the world’s have’s and have-not’s growing even wider. When it comes to Chile specifically, anger has been boiling over high healthcare and medicine costs, low pensions, high utility costs, a lackluster education system, etc… the kinds of problems most of the world’s middle class can relate to these days. Pinera has already attempted to placate the protestors by reshuffling his cabinet, boosting social spending, raising taxes on the country’s highest earners, abandoning tax reform plans and cancelling two high-profile international events that were scheduled to be hosted in the country, but to no avail.

The protests have raged into this week (so far, 24 people have died and more than 2,000 have been injured; 7,000 people have been arrested), a testament to just how fed up Chileans are with “politics as usual.” Complicating matter for Pinera is that there are no leaders of the protest movement that he can negotiate with directly to bring an end to the mayhem.

Hence his constitution gamble, a broad-yet-still-somewhat-vague promise to change things for the better.

Some context: Chile’s constitution is a holdover from the military rule of Augusto Pinochet, and many Chileans are quick to point to it as a main source of the country’s inequality today—Pinochet and his economic advisors adhered to the economic philosophy championed by U.S. economist Milton Friedman, where the government has a minor role when it comes to regulating the free market and providing public services. But even though there is now momentum toward a constitution that provides better social safety nets and public services, key questions remain: what will be the political and economic comprises needed to deliver on these goals? More state intervention? More private sector involvement? A mix of the two? To what degree? These are issues that will be debated over the coming months in the runup to the plebiscite.

Originally, Pinera and his administration preferred that the new constitution text be drafted primarily by lawmakers and then put to a referendum, an attempt to limit the number of anti-establishment figures that could be elected to rewrite the country’s principal political document. Public opinion pushed for a new “constituent assembly” to be elected to take charge of the new text given deep distrust of the current political class. Pinera’s administration, severely weakened over the last month, compromised by offering on the ballot an option for a committee made up of both existing legislators and newly elected representatives and one exclusively formed by the latter. The fear is that such a grouping could push the country leftwards and enshrine more state intervention into the economy/business spheres, making already-skittish foreign investors even more wary of doing business in the country.

But even if the country’s constitution is successfully rewritten—a big if—there is no guarantee that Chile will return to what it once was. Many of the factors driving protestors to the streets have built up over generations, and now they’re out in the open. These are problems that are impossible to be solved with a stroke of a pen and needing years of economic and social reforms. Meanwhile the Chilean people are so angry about the here and now.

If the world doesn’t heed what’s going on in Chile, the mistakes made in Santiago are likely to be repeated elsewhere.

Being the most unequal OECD country is bad enough; also being at the bottom of this OECD list for general government spending is asking for trouble.

Just days before the protests started, Pinera had proclaimed Chile to be “an oasis of stability.” But like most visions of an oasis, this one turned out to be a mirage.

The irony would be funny if it wasn’t tragic.

There are certain countries that have enough strong institutions and established political stability to wait out leaderless protests—see France and China. But for those in more politically precarious situations (think Chile and Lebanon), leaderless protests pose an existential threat; to them, the only thing worse than facing a well-organized group of dissatisfied voters is a disorganized one with momentum. Chile is trying to arrest that momentum with a new constitution. TBD if that will work. 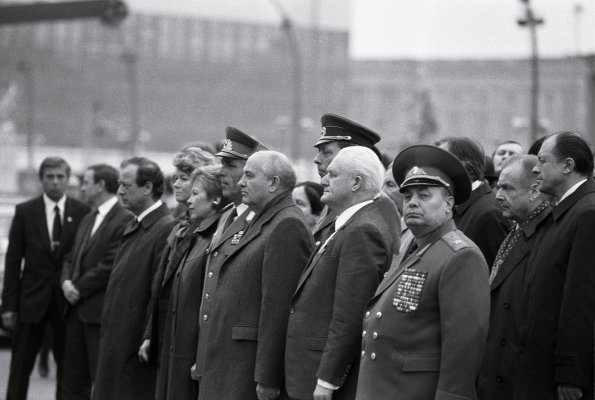 Mikhail Gorbachev: 'In 1989 the World Chose Peace; We Need That Vision Today'
Next Up: Editor's Pick