Greta Thunberg Is the Youngest TIME Person of the Year Ever. Here’s How She Made History

With her selection in 2019, 16-year-old climate activist Greta Thunberg becomes the youngest individual ever to be named TIME’s Person of the Year.

While the franchise has a long record of recognizing the power of young people, the editors have never before selected a teenager. Before 2019, the previous individual to hold the record for youngest Person of the Year was the first Person of the Year in TIME’s history: 25-year-old Charles Lindbergh, selected as most influential man of 1927.

Lindbergh’s age was, to many, inseparable from his place in the world. Though some of his admirers suggested that his feats of aviation made him so special that he ought not to risk his life with further flights, others believed that he could not stop as “heroes age swiftly when seated at office desks.”

Read more: What It Means When TIME’s Person of the Year Is a Group

In the mid-1960s, young people represented an unusually large share of the population, and that generation’s impact was growing. “If the statistics imply change, the credentials of the younger generation guarantee it,” the story noted. “Never have the young been so assertive or so articulate, so well educated or so worldly. Predictably, they are a highly independent breed, and—to adult eyes—their independence has made them highly unpredictable. This is not just a new generation, but a new kind of generation.”

In the case of 1966, experts attributed this phenomenon to a confidence born of affluence and comfort, and of having grown up in a time of peace, even as the Vietnam War waited around the corner for many of them. The young Baby Boomers, the editors believed, were given a largely glowing world to inherit, and they were sick of waiting to do so. That knowledge gave them the ability to speak boldly.

What they said was this: Our elders have sold us out. The system isn’t working. The time to act is now. The world is changing faster than ever, and the young are the ones who see what’s happening.

More than half a century later, many of the same themes have returned in the selection of Greta Thunberg as 2019’s Person of the Year—if for a different reason. Due to the actions of prior generations, the Earth Thunberg’s generation will inherit (a planet that TIME warned was in trouble three decades ago, when the Endangered Earth was Person of the Year for 1988) is losing some of its promise.

Her message is one the Boomers would have recognized in the 1960s: Our elders have sold us out. The system isn’t working. The time to act is now. Perhaps even more drastically than it did in 1966, the world is changing, and the young are the ones who see what’s happening.

And in 2019, as millions of people across the planet joined her, history was made by the vision of one young person in particular. 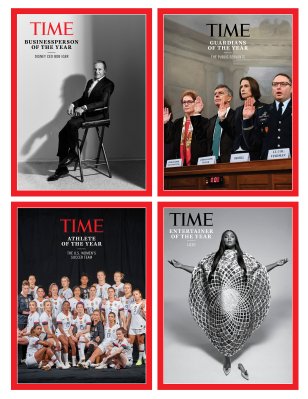 Behind the Scenes of TIME's 2019 Person of the Year Issue
Next Up: Editor's Pick