This Marsupial Was Only Discovered 5 Years Ago. Climate Change and Australia's Bushfires Are Driving It to Extinction

The black-tailed dusky antechinus was only discovered five years ago in Australia and now the researcher who identified it fears it could be on the brink of extinction as a result of climate change and intense bush fires.
Gary Cranitch—Queensland Museum
By Amy Gunia

Andrew Baker knew he had found something special when he heard the hissing noise coming from inside the metal trap he and a team of researchers had set out in the rainforest in eastern Australia. None of the mouse-sized marsupials called antechinuses that he had been studying made a similar sound. Further research proved Baker, a mammalogist at Queensland University of Technology, right. In 2014, the animal he discovered was officially identified as a new species: the black-tailed dusky antechinus.

But time is already running out to study the creature, which lives on the rocky, muddy slopes of forests between Queensland and New South Wales. Since October, fires have ravaged the rainforest it calls home, and they’re still burning. Baker says the number of black-tailed dusky antechinuses has been dwindling for years because of hotter temperatures and drier conditions, which are also killing off its food source of insects and spiders.

The antechinus is just one of the country’s unique plants and animals whose existence is threatened by the devastating combination of climate change and the bushfires tearing across Australia this season. Conditions created by climate change may further hinder habitat recovery, causing fragile populations to collapse and leaving Australia forever changed.

“If temperatures continue to ramp up, hot seasons lengthen and cooler seasons shorten, then during critical periods of forest recovery there are likely to be more fires,” Baker says. “This will only further jeopardize habitat stability and place any recovering animal populations at even higher risk of extinction.”

The bushfires, which have killed more than 20 people and destroyed more than 2,000 homes, are still burning. On Friday, thousands of people evacuated their homes in the country’s southeast as fires moved in. The fires have blazed a trail of destruction across more than 25 million acres—an area about the size of the U.S. state of Indiana.

The bushfires have taken a catastrophic toll on wildlife across Australia. Chris Dickman, an ecologist at the University of Sydney’s Faculty of Science, has estimated that more than a billion animals maybe have been killed or will die as a result of the fires.

Haunting images of badly burned koalas and charred kangaroo carcasses have grabbed international attention and led to millions of dollars in donations for recovery efforts. But it’s the species with smaller habitats and fewer numbers that are more vulnerable to being wiped out.

Antechinuses breed each year in a two-week frenzy, at the end of which all the males drop dead. They are found nowhere else in the world.
Gary Cranitch—Queensland Museum

As many as 100 plant species classified as threatened could have already had their entire habitats burned by fires this season, says David Keith, a fire ecologist at the University of New South Wales. Australia’s plant life, more than 90% of which is found nowhere else in the world, evolved to survive fires—but perhaps not the kind of unprecedented blazes that this season has brought, Keith says.

Last year was the hottest and driest on record in Australia, according to a report released Thursday by the country’s Bureau of Meteorology. In December, Australia experienced its hottest day ever recorded, with temperatures averaging 105° Fahrenheit across the country. It’s these conditions, experts say, that have caused one of the worst bushfire seasons on record in Australia. “Climate change is supercharging the fires that we’re seeing now,” says Lesley Hughes, a professor of biology at Macquarie University and a Climate Councillor at the Climate Council of Australia.

John Woinarski, a professor specializing in conservation biology at Charles Darwin University, says those conditions create particular concern for species with small populations and living ranges. He is worried about the future of animals like a forest-dwelling rat-kangaroo called the long-footed potoroo; the greater glider (a fluffy, possum-like creature); and several species of animals that live on Kangaroo Island in South Australia.

On Kangaroo Island, sometimes sometimes referred to as “Australia’s Galapagos,” around 380,000 acres have already been devastated by fires. The fires, which started with a lightning strike in late December, are still burning.

There is grave concern for Kangaroo Island’s endangered glossy black-cockatoo. Before the fires, there were about 400 on the island, says Daniella Teixeira, a Ph.D. student at the University of Queensland who studies the species. Teixeira, who is currently more than 1,000 miles away in Brisbane trying to finish her thesis on the birds, says that it’s been devastating to see pictures of the landscape where the cockatoos she studied lived.

“I know the trees and the birds that nest in those trees and they’re all gone,” Teixeira says. “I was actually there the moment that the baby bird flew out of the nest, when it took its first flight and joined the flock,” she says of one nest.

This satellite image shows the areas on Kangaroo Island that have been burned by the bushfires in late December 2019 and early January 2020.
NASA Worldview

Other conservationists are in a frenzy searching for surviving Kangaroo Island dunnarts, another mouse-sized marsupial, which researchers say could also be facing extinction. The creature was endangered even before the fires began, with only about 500 left on the island.

“It’s not unrealistic to think that this could be a precursor to the extinction of the species, that’s not being dramatic,” says Pat Hodgens, who works on Kangaroo Island dunnart conservation with the non-profit Land for Wildlife. The fires, he says, have left the animal’s habitat in ruins: “It’s a totally changed landscape. In some areas it’s just scorched earth, ash on the ground, burnt rocks.”

His team recently captured their first-ever video footage of the creatures, showing a female with joeys in her pouch. It was particularly hard on Hodgens to see the destruction in the area where the video was shot. “Where she lived and where she was probably rearing her young has been absolutely decimated by the fires, there’s nothing left of the habitat, that’s pretty devastating,” he says.

Any dunnarts that escaped the flames will struggle to find food and shelter in their singed habitat, and will face perils like hungry feral cats.

Baker, who studies the antechinus, is anxiously awaiting cooler weather or rain to put out the fires burning around the creatures’ habitat so he can survey the damage. He hopes to do more research on their strange breeding habits—antechinuses breed each year in a two-week frenzy, at the end of which all the males drop dead—with the goal of finding a way to get them to reproduce in captivity to help rebuild their numbers.

He fears it may already be too late. “We’ve passed the edge,” he says. “Even if they’re still there, we’re on the downhill run towards their extinction, and I don’t know what we can do to turn it around.” 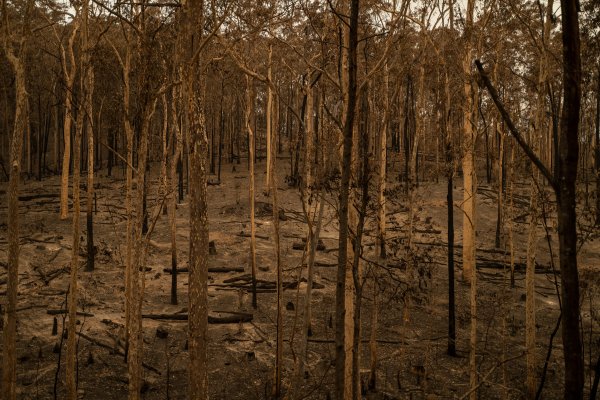 Will Australia's Fires Get Leaders to Act on Climate?
Next Up: Editor's Pick