By Amy Gunia and Tara Law

At least 24 people have been killed as bushfires have burned more than 12 million acres in Australia—an area approximately the size of the U.S. states of Vermont and New Hampshire combined. The smoke from the blazes in the southeast of the country is visible from space, and it is spreading so far that it is causing haze in New Zealand more than 1,000 miles away.

The fire season in Australia is far from over, and already it is shaping up to be one of the most intense in the country’s history.

“The intensity, the scale, the number, the geographical range, the fact that they’re occurring simultaneously, and the sorts of environments that are burning are all extraordinary,” David Bowman, a professor of pyrogeography and fire science and the director of the Fire Centre Research Hub at the University of Tasmania, tells TIME.

“We’re in the middle of a war situation…mass evacuations, the involvement of the military, hugely exhausted firefighting campaigns, it’s difficult to explain.”

Several people remain missing, and hundreds of homes have been destroyed. The military has deployed ships and aircraft to bring supplies to towns ravaged by the fires, and to evacuate residents who were cut off by the flames.

Conditions are expected to worsen again, with hot weather that will likely intensify the fires.

Here’s what to know about the crisis that’s unfolding in Australia.

The fires have also devastated Australia’s unique wildlife. According to an analysis by Professor Chris Dickman at the University of Sydney, an estimated 480 million animals could perish in New South Wales as a result of the bushfires. Many of the animals are likely to have been killed by the bushfires, although some will likely die later due to the destruction of their food and shelter, according to Dickman’s research.

In an interview with Public Radio International, he updated his estimate to suggest 1 billion animals could be affected across the country.

Officials have warned that the country will be under threat from fires for months. Daniel Andrews, the premier of Victoria, told reporters that Australians should not be “complacent” about the fires, according to the Associated Press.

“We are by no means out of this. And the next few days, and indeed the next few months, are going to be challenging,” Andrews said at the weekend.

A koala rescued from a bushfire is in surgery at the Port Macquarie Koala Hospital in Australia on Dec. 6, 2019.
Michaela Skovranova

How extensive are the fires?

About 12.35 million acres of land have burned across Australia, according to the Associated Press. By comparison, wildfires in California in 2018—which the California Department of Forestry & Fire Protection says was “the deadliest and most destructive wildfire season on record” in the state—burned an area of less than 2 million acres.

A map maintained by researchers shows large areas of Australia were burned in 2019, with much of the damage in the last month.

Bushfire risk is currently the highest in New South Wales and Victoria, the most populous states, where it is summer. Summer runs from December to February, but a state of emergency had already been declared in New South Wales in mid-November over the fires. In southern Australia and Tasmania, fire season continues into the fall.

A map shows land burned by fires in Australia by month during the year 2019.
Landgate's MyFireWatch

Owen Price, an Associate Professor at the Centre for Environmental Risk Management of Bushfire at the University of Wollongong, tells TIME that approximately 30% of the forest in New South Wales has been burned, but that may increase to around 50% this weekend with the weather forecast.

Where to donate to help with Australian bushfire recovery

The Salvation Army Australia, which is providing meals to evacuees and frontline responders, is accepting monetary donations.

The Australian Red Cross is accepting to contributions to its Disaster Relief and Recovery Fund, which has so-far deployed 1,285 staff and volunteers to disaster-affected communities.

Local fire services in several states have set up donation funds, including the New South Wales Rural Fire Service which has set up a collection for some of the families of volunteer firefighters that have been killed battling the fires. You can also donate to the local fire service directly. Victoria’s Country Fire Authority has set up a Bushfire Disaster Appeal to support community members affected by fires in the area.

The Port Macquarie Koala Hospital, which helps rescue and treat injured koalas, is accepting online donations. A separate GoFundMe campaign has raised more than $4.7 million for the organization.

At least 200 fires were burning in Australia as of Jan. 3. Last week alone, 10 deaths have been confirmed in Victoria and New South Wales.

A fire tracker map maintained by researchers in Western Australia shows fires burning across the country, with fires raging on the southeast coast of Victoria.

Victoria Premier Daniel Andrews on Thursday declared a state of disaster for several areas, and authorities are calling for the evacuation of large areas of the state.

In the resort town of Mallacoota, where last week some 4,000 residents were forced to flee to the shores as winds pushed a fire through the area, the military is assisting with evacuations.

Australia’s Minister for Defense posted photos on Twitter of Mallacoota residents being evacuated.

Victoria’s Bureau of Meteorology posted pictures of hazy skies, and said that visibility at an airport in the city of Albury, on the border of New South Wales and Victoria, was as low as approximately 1,600 feet.

Victoria Premier Dan Andrews posted on Twitter advising residents to call emergency services if they are experiencing chest tightness or shortness of breath.

Haze from the fires was impacting places as far away as New Zealand, according to Australia’s Bureau of Meteorology. An image captured by a NASA satellite captured large swath of smoke from the fires stretching across the Tasman Sea.

NOAA-NASA's Suomi NPP satellite captured imagery of the fires and the resultant billowing smoke cascading off the edge of Australia on Jan. 01, 2020.
NASA

The fires could get worse again

Although conditions have cooled slightly in Australia this week, the summer doesn’t end until the end of February, and further hot weather could exacerbate the crisis.

Bowman, the researcher in Tasmania, says that the scale of fires already burning means that when the weather heats up, fires intensify quickly.

“Every time you get the weather set up, as we’re entering in the next 24 hours, the fires just explode again and you have even bigger fires and new fires and new fire fronts and new lightening strikes…it’s a diabolical ratchet.”

Bowman says that there are other bushfire prone areas that may be in danger.

“Here in Tasmania, the whole of the east coast could blow up. There’s a big chunk of forest around Melbourne, tall forests around Melbourne…in southwestern Australia there’s still plenty to burn,” Bowman says.

“The door is open and we have no idea where this is going to end,” he says. “Most of Australia’s vegetation is highly flammable, the fire has plenty to go, it has capacity to keep burning, it’s not going to run out of fuel.”

What role is climate change playing?

Experts say that climate change is contributing to the historically intense fire season.

“Climate change is supercharging the fires,” Lesley Hughes, a professor of biology at Macquarie University and a Climate Councillor at the Climate Council of Australia, tells TIME. “It has affected the ongoing decline of rainfall and therefore impacts of the current drought that we’re experiencing, especially in southeastern Australia” she says.

Hughes adds that climate change may also be causing more frequent and severe heatwave conditions in the country. The year 2019 was the hottest on record for Australia, with the temperature reaching approximately 2.7 degrees Fahrenheit above the long-term average, according to Australia’s Bureau of Meteorology.

“When you have the combination of very hot, dry days, strong winds, and very dry fuel, if you get any sort of spark, you have the conditions for a very bad bushfire,” Hughes says.

Despite the bushfire crisis, Australia’s Prime Minister Scott Morrison has argued that there is no direct link between Australia’s greenhouse gas emissions and the severity of the fires burning across the country. He has, however, acknowledged that climate change could be impacting bushfires and the length of the fire season. Australia is one of the highest per capita emitters of carbon dioxide in the world, according to Climate Analytics, an advocacy group that tracks climate data.

Hughes says that the government’s stance on climate change is hurting its ability to respond to the crisis.

“If you don’t accept the science—that’s been saying for at least 30 years that these are the sort of conditions we should be preparing for and mitigating against—then you come to a disaster like this completely unprepared.”

Australia’s Prime Minister has faced backlash over the crisis, both for his reluctance to link Australia’s emissions to the bushfires and for his response to the fires. Protests broke out at Morrison’s office in December, with some demonstrators demanding action on climate change, while others criticized Morrison for taking a vacation to Hawaii during the fire crisis. The Prime Minister cut short his family holiday and apologized for the timing of his trip.

Alex Oliver, Director of Research at the Sydney-based think-tank Lowy Institute, tells TIME that the Morrison government’s stance on climate change has angered some Australians who see climate change as a serious problem and want to see the government take stronger action.

On Saturday morning Morrison announced a cancellation of an economic visit to India in order to chair a National Security Committee meeting, Sky News Australia reports.

On Thursday, Morrison was confronted by angry residents of a bushfire-ravaged town who cursed at him and insulted him on a visit to the town.

Some residents refused to shake his hand, others made obscene gestures and called him an “idiot” and worse.

Sarah Maddison, a professor of politics at the University of Melbourne, tells TIME that Morrison’s response to the situation has been “extraordinarily misjudged.”

“He seems determined to minimize the scale and impact of these fires, insisting that this is the kind of natural disaster that Australia experiences all the time,” she says.

Maddison tells TIME that bushfires have in the past often been used by Australia’s leaders to garner political support.

“They put on their Akubras [Australian hat] and they head out to the front line and they offer condolences and they get to set the narrative about… their leadership of the issue,” she says.

For Morrison, the fires appear to have had the opposite effect, she says.

“He seems to be scurrying around with his tail between his legs, so determined to avoid talking about climate policy that he’s unable to offer anything that looks like genuine compassion or empathy.” 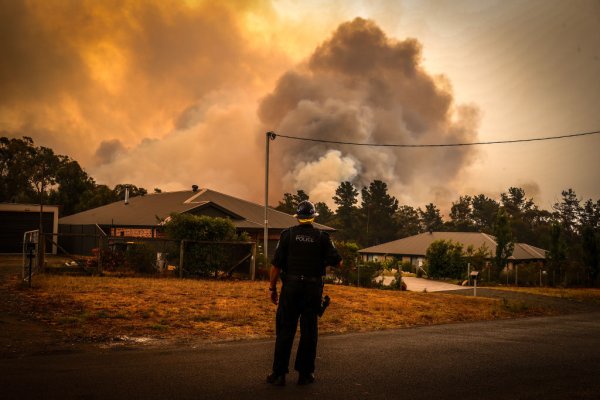 Wildfires Rage Across Australia as Sydney Fireworks to Go Ahead
Next Up: Editor's Pick