'The Police Did Nothing.' Students in India Are Protesting After a Masked Mob Violently Attacked a Top Delhi University

Nursing a bandaged right hand and bruises on his back from where he was struck with a rod, Santosh Singh says he no longer feels safe at Jawaharlal Nehru University in Delhi, where he is a masters student.

Singh comes from Bihar, India’s poorest state, and is the first member of his extended family to attend any university — let alone JNU, as the country’s most prestigious higher education institution is known. He was so happy when he arrived for the first time that he kissed the campus gate. “I worked hard to enter this university,” he says. “It meant so much to me.”

But on Sunday evening, as he was walking toward his student accommodation, masked men stormed the campus. Armed with iron rods, sticks, baseball bats and stones, they attacked students and teachers, smashed windows and vandalized student dormitories. “I thought, this is the end,” Singh told TIME on Monday. “They are going to kill us.”

As he spoke, a crowd of his fellow students marched behind him, chanting slogans against the police and government.

In all, more than 30 students and staff were injured in the violence, some severely. One video from the scene shows JNU’s student union president, Aishe Ghosh, bleeding from her head. “I have been brutally attacked,” she tells the camera. Other footage shows masked men rushing through university corridors armed with sticks. Police were present, some students said, but did nothing to stop the violence. “The police just watched both inside and outside the campus and did nothing,” says Mohammad Sharif, a masters student.

“Even a blind student like me was not spared,” said Surya Prakash, 25, a Sanskrit student who says he was beaten inside his room. His bed was still covered in shards of glass from a smashed window. “When I told them I was blind, they accused me of lying.”

Suryaprakash, a blind research scholar pursuing an MPhil in Sanskrit, is seen sitting in his room at Sabarmati Hostel, Jawaharlal Nehru University (JNU), on Jan. 6, 2020 in New Delhi, India. He was also beaten up the day before during violence inside the campus.
Vipin Kumar—Hindustan Times via Getty Images

Singh has no doubt about who the masked men were. “They were ABVP goons,” he says, referring to members of the Akhil Bharatiya Vidyarthi Parishad, a right-wing Hindu nationalist organization affiliated to the government of Indian Prime Minister Narendra Modi. “Their slogans, their style of talking and the word they love the most — ‘traitors’ — was on their lips when they were beating us,” Singh tells TIME. Other witnesses said the mob was chanting “victory for mother India” and “shoot the traitors of the country.” “Even the ambulance which came for the injured was attacked,” student Syed Ali Mohammad tells TIME.

The ABVP denies involvement, saying instead that the attackers were masked left-wing students. But evidence suggests the attack was coordinated on ABVP WhatsApp groups, and experts say the attack fits a pattern of intimidation by Modi’s government and its Hindu nationalist allies against universities, which have always been bastions of progressive thought but now feel increasingly out of step with the country’s prevailing political climate of religious nationalism.

“The authorities have failed in their duty to ensure the safety of the students, signaling a shameful complicity of the state machinery,” said Avinash Kumar, executive director of Amnesty India, in a statement. “Moreover, the constant demonization of the students by the Government of India continues to increase their vulnerability to such attacks and awards impunity to the attackers. It is not an isolated incident and must be seen amidst the larger pattern of pushback as massive protests continue unabated across the country.”

In May 2019, Modi’s Bharatiya Janata Party (BJP) won a massive mandate to govern India for another five years, with an increased majority in national elections. Amid a faltering economy, his reelection campaign tapped heavily into the Hindu nationalist politics held by his party’s base. Such politics tend to encompass the belief that India is a Hindu nation, a bitter rivalry with Pakistan, the scapegoating of Muslims (who make up 14% of India’s population), and a disdain for the secular intellectuals who ran India for much of the 20th century and who still hold important influence at universities like JNU.

Since winning reelection, Modi has rewarded the party base by delivering on several long-held Hindu nationalist goals: in August, his government revoked the constitutional autonomy of Jammu & Kashmir, India’s only Muslim-majority state and a territory claimed by India’s arch-rival Pakistan. Later that same month, a project to root out “infiltrators” in Assam, an Indian state bordering Muslim-majority Bangladesh, was completed, putting nearly 2 million people at risk of losing of their citizenship. And in December, Modi’s government passed the Citizenship Amendment Act (CAA), a law that would offer streamlined asylum applications to members of all South Asia’s major religions — except Muslims, India’s largest minority community and a regular BJP target.

The passage of the CAA sparked a wave of demonstrations from opponents of the BJP. Across the country, including on the JNU campus, protesters rose up in opposition to the law, which they said was a flagrant violation of India’s secular constitution that privileged Hindus and other groups over Muslims. “The very soul of the Indian freedom struggle and constitution was the idea of equal citizenship for people regardless of their faith,” Harsh Mander, an activist and former civil servant, told TIME in December before he was detained while peacefully protesting. “It’s this that they are destroying.”

Students and supporters hold placards as police personnel stand guard during a protest against an attack on the students and teachers at the Jawaharlal Nehru University (JNU) campus in New Delhi on Jan. 6, 2020.
Noah Seelam—AFP via Getty Images

The attack on JNU on Sunday came shortly after more than 100 other students and teachers had participated in a protest against fee increases that would have made it difficult for poorer students like Singh to pay for their stay at JNU. Even though their protest wasn’t linked to the Citizenship Amendment Act, the attack on peacefully-demonstrating students was seen by many in India as an attempt by supporters of the BJP to intimidate protesters at a time when it is struggling to keep them off the streets more generally.

It wouldn’t be the first time. Police stormed two universities in December amid the anti-CAA protests sweeping the country. At Jamia Millia Islamia university in Delhi, they were filmed beating a group of Muslim students protesting the law. Shortly afterward, police stormed Aligarh Muslim University in Uttar Pradesh. Two students there claimed to have been tortured in police custody. On Monday, Delhi police charged Ghosh, the JNU students’ union president who was left bleeding from her head, and 19 other protesting students with vandalism, but have not arrested any of the masked attackers. Police have also been blamed for several of the 23 deaths in nationwide anti-CAA protests, particularly in Uttar Pradesh, India’s most populous state.

The group many students blamed for the attack, the ABVP, is the student wing of the Rashtriya Swayamsevak Sangh (RSS) — the ideological powerhouse of the Hindu nationalist movement, which in turn is the parent organization of the ruling BJP. The RSS was founded in 1925 and was heavily influenced by European fascist parties, including the Nazis in Germany. Subscribing to the belief that rigid discipline is the key to creating a force able to wield political power, the RSS runs camps where adherents are drilled with a regime of Hindu nationalist lectures and physical exercise while wearing khaki uniforms. Modi, along with many other top members of the BJP, attended RSS camps as an adolescent and continues to be close to the organization.

The attackers at JNU weren’t decked out in khaki — but displayed other signs of allegiance to the Sangh Parivar, the constellation of Hindu nationalist organizations with the RSS at its center. Rakeesh Kumar, 24, was walking towards his dormitory on Sunday night when four masked men stopped him. “What is your ideology?” one man carrying an iron rod asked him. In any normal circumstance Kumar would have laughed at the question, he tells TIME, but he was terrified. He pointed to the book he was carrying: a political science volume titled “Hindu Nationalism” edited by Christophe Jaffrelot.

“Had they known what the book was about I would have been beaten badly,” Kumar says, referring to the book’s critical bent. But when the men saw it, they left him alone. “Hail Lord Ram,” they said — a slogan referring to the militaristic deity who has become an icon to Hindu nationalists — and moved on toward another building.

— With reporting by Sanya Mansoor/Delhi 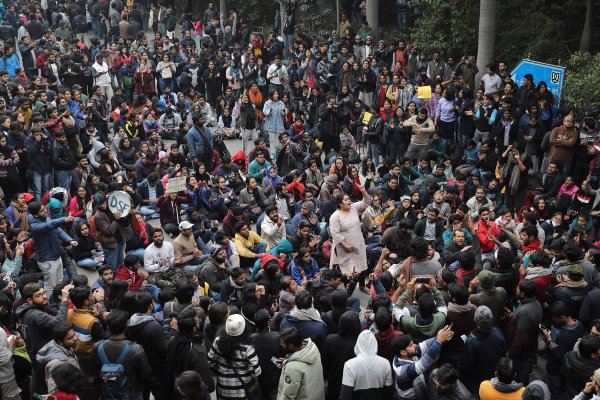 The Battle for India's Founding Ideals
Next Up: Editor's Pick