The Indian Government Is Revoking Kashmir's Special Status. Here's What That Means

The Indian government on Monday announced plans to divide up the contested Himalayan region of Kashmir and change the constitutional settlement guaranteeing its semi-autonomous status, provoking uproar in Parliament and fears of an imminent clash with Pakistan.

Jammu and Kashmir, which includes the Kashmir Valley, is India’s only Muslim-majority state and the subject of a long-running territorial dispute with Pakistan, which currently administers territory lying west of the Indian-administered state. The nuclear-armed powers have gone to war over Kashmir twice, and there’s a long-running insurgency on the Indian side between separatists and the army that has left at least 40,000 people dead since 1989.

India’s Hindu nationalist Bharatiya Janata Party (BJP), which returned to power after elections in May with an increased majority, has long called for the revocation of Article 370 of India’s constitution, which guarantees Kashmiri autonomy. Now, the party seems to be trying to make this long-held ambition become reality. Here’s what to know about the situation in Kashmir and what it means for the world.

What is Article 370 and why is it important?

Kashmir’s status as a semi-autonomous state is complex. It has its roots in the partition of British India in 1947, when Kashmir’s Hindu ruler decided to join India rather than Pakistan on the condition that it was granted a level of autonomy. Over the years, that autonomy was worn down by the central state, writes Professor Sumantra Bose in his book Secular States, Religious Politics. But opposition to Kashmir’s “special status” has only increased since, in tandem with the rise of Hindu nationalism.

The two most significant concessions given to Kashmir in the Indian constitution of 1950 were Article 370 and Article 35A. Article 370 gave Indian-administered Kashmir autonomy in all areas except defense, communication and foreign policy. Article 35A gave only “permanent residents” of Kashmir the right to own property.

Since the 1950s, Hindu nationalists have rallied against these exceptions, arguing that Hindu-majority India must not bend its constitution for Muslim-majority Kashmir. During the 2019 election campaign, the BJP promised to revoke Kashmir’s “special status,” tapping into many Hindu voters’ hostility toward Muslims and mistrust of Pakistan.

“The fact that Kashmir had a special status was not widely known among Indians generally until recently,” says Nitasha Kaul, a Kashmiri lecturer at the University of Westminster in London. “As awareness around Kashmir has grown, the BJP argument has presented Article 370 as something that causes separatism in Kashmir.”

In the BJP’s 2019 manifesto, the page containing the pledge to revoke Kashmir’s special status also includes a quote from Prime Minister Narendra Modi: “India supports peace, but the country will not hesitate to take any steps required for national security.”

It’s those words that will worry residents of Kashmir, who on Monday were reportedly stockpiling food and supplies ahead of curfews. When tensions last rose in the region in February, India sent jets into Pakistani airspace and the two countries traded fire across the de-facto border.

What other changes did Home Minister Amit Shah announce on Monday?

As well as the plan to revoke Kashmir’s “special status” from the constitution, the Indian government also brought forward plans to reorganize the administrative borders in the region.

Shah introduced to parliament a plan to break up the current state of Jammu and Kashmir into two separate “Union Territories.” One, which will retain the name Jammu and Kashmir, will have its own legislature. The other, the sparsely-populated region of Ladakh, will be ruled directly by India’s central government. The effect of such changes will be to increase the Delhi government’s control over both.

In doing so, writes Rohan Venkataramakrishnan on the Indian news site Scroll.in, the Indian government is “using a legal technicality … to remove the autonomous powers that the state had,” while also bypassing elected Kashmiri politicians.

“It’s the West Bank model,” Rana Ayyub, an Indian journalist and author, tells TIME, referring to the Palestinian territories. “Kashmiri voices have been silenced, democratic leaders have been censored. It’s the first time since the Emergency [a period of authoritarian rule under Indira Gandhi in the 1970s] that two democratic leaders from mainstream parties have been placed under house arrest.”

While Shah’s proposed changes could theoretically be challenged by the Indian Supreme Court, analysts say the court is often slow to reach judgements (it is still deliberating over one famous case from the 1990s) and has a track record of ruling in favor of the incumbent government.

What’s the situation on the ground in Kashmir now?

As the news filtered across the region and the world, residents of Kashmir itself were left in the dark. On Sunday, the day before Shah’s announcement, the Indian government had shut down Internet access and phone lines in Kashmir. That evening, Kashmiris knew something big was going to happen — they just didn’t know what.

“There’s essentially no other place on Earth that has had as many Internet shutdowns as Kashmir,” says Ravi Agrawal, the author of India Connected: How the Smartphone Is Transforming the World’s Largest Democracy. “The government doesn’t need any planning at all. It can do it instantaneously. It’s as simple as flicking a switch.”

The reason for the shutdown, Agrawal says, is to make it harder for people to organize protests that could turn violent, or for militants to coordinate attacks. Hostility to the Indian Army, viewed by many Kashmiris as an occupying force, is rife in the valley. The Indian government would have known well in advance that this decision would likely provoke fierce resistance.

The tactic also makes it harder for Kashmiris to garner support from the rest of India. “It’s one thing to have a protest,” Agarwal says, “but if you don’t get to have images disseminated of that protest, then what’s the point? Protesting is about imposing pressure on the state, or on society.”

Some fear that violence is now inevitable. “At some point, they will have to ease the curfew,” Ayyub tells TIME. “So we are looking at a possible unfortunate series of violent events. This is the very essence of the fight in Kashmir. The insurgency was because Kashmiris wanted to be given independent status. Now, they have made it a Union Territory without even consulting Kashmiris. It only means dark days ahead for the valley.”

What’s the background to the crisis in Kashmir?

This year has been one of the deadliest periods in Kashmir’s recent history, with more than 300 people killed in six months, according to statistics published by Reuters in July.

In February, during the runup to national elections, some 40 Indian paramilitary police were killed in a suicide bombing by a Pakistani militant group. In response, India sent fighter jets into Pakistani airspace and bombed Pakistani territory, though nobody was killed.

The crisis de-escalated after Pakistan returned an Indian pilot who had been captured when an Indian plane was shot out of the sky. But that wasn’t before Modi was able to leverage jingoistic rhetoric for his re-election campaign, pledging to do all that was necessary to protect India — and stoking tensions over Kashmir. (Khan took the opportunity to burnish his own leadership credentials, too.)

Now that the BJP has returned to power with an imposing majority, many Indian Muslims fear that Kashmir is a test-case in turning India into what Hindu nationalists call a “Hindu Rashtra,” or Hindu nation.

“Even in Delhi, the whole hyper-nationalist thing against Muslims has become so much more visible since Modi’s reelection,” says Kaul, the London-based academic. “It’s like Germany in the late 1920s, early 1930s. It’s probably a few years before all of that really starts to happen, but it’s definitely on its way.” 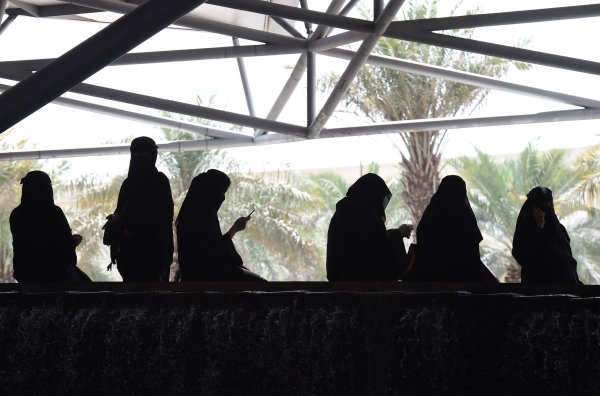 Saudi Arabia Is Introducing Landmark Reforms for Women. But the Activists Who Pushed For Them Remain in Prison
Next Up: Editor's Pick