India's Government Wants to Block Some Muslims From Citizenship. Here's What to Know About a Controversial New Bill

India moved a step closer on Tuesday to making it easier to imprison and deport some members of its 200-million strong Muslim minority, in a significant challenge to the country’s secular constitution.

On Tuesday, Indian lawmakers passed the Citizenship Amendment Bill through the lower house of Parliament where the Hindu nationalist Bharatiya Janata Party (BJP), led by Prime Minister Narendra Modi, has a huge majority.

The BJP came to power under Modi in 2014, but won a landslide reelection in May with an increased majority. Since then, the government has embarked on increasingly bold moves to reshape India according to its ideology, sidelining Muslims in the process.

In August, bolstered by victory, Modi revoked the constitutional autonomy of Kashmir, India’s only Muslim-majority state. Soldiers poured in, setting up roadblocks, imposing a curfew and imprisoning political leaders. And in November, India’s top court settled a politically charged court battle over a plot of holy land contested for decades between Hindus and Muslims, ruling in the Hindus’ favor. Throughout, the Modi government has turned a blind eye to mob violence against Muslims.

But the Citizenship Amendment Bill is Modi’s biggest effort yet to change the religious and social makeup of India in line with Hindu nationalist beliefs. Here’s what to know.

What is the Citizenship Amendment Bill?

The Citizenship Amendment Bill would give many citizens of Afghanistan, Pakistan and Bangladesh the opportunity to apply for Indian citizenship based on their beliefs alone. But the Bill stipulates they must be Hindu, Christian, Sikh, Jain, Parsi or Buddhist; Muslims are not listed.

The BJP says it is trying to protect people from persecuted communities in other South Asian countries, making it easier for them to apply for Indian citizenship. But Rohingya Muslims from Myanmar (who the U.N. says are victims of genocide) and members of Muslim minority sects in Afghanistan, Pakistan and Bangladesh would all be blocked from claiming citizenship under the bill.

Opponents are also concerned that the Citizenship Amendment Bill undermines India’s constitutionally mandated secularism, and could make it easier for Muslims within India to be thrown in prison and even deported if they cannot prove their Indian citizenship. They say the bill fits into a pattern of BJP measures that threaten to turn Muslims into second-class citizens in India.

The Citizenship Amendment Bill follows a yearslong BJP project, initially tested in Assam, a state in northeastern India. In 2015, the 33 million people who live in Assam were asked to provide documents proving their Indian citizenship dating back to before the 1971 war. Many were unable to, having lived lives of displacement and poverty. In August, 1.9 million people, thought to be mostly Muslims, were left off the state’s final official list of citizens. The government is now constructing 10 prison camps to house those who fail an appeal process.

Modi’s Home Minister, Amit Shah, has long spoken of his desire to eliminate “infiltrators” in Assam from neighboring Bangladesh, saying he wants to replicate the process in the rest of the country.

Is the bill likely to become law?

The bill passed with little challenge in the Lok Sabha, the lower house of the Indian parliament, thanks to the BJP’s large majority there.

It now moves to the upper house, where the BJP relies on coalition partners for its majority. That could slow the bill’s passage, though most analysts say it is still likely to become law.

As Shah spoke in parliament, anti-migration protesters marched against the bill in the northeastern states of Tripura and Assam, arguing that it could result in waves of Hindu immigration from Bangladesh. Their concerns could be a problem for the BJP, which normally counts on anti-migrant activists in the northeast as a support base.

Meanwhile, a minority of lawmakers in parliament were challenging Shah’s support for the bill. “It is an assault on the foundational values of our Republic,” said Shashi Tharoor, a Congress member of the Lok Sabha. “The fact is, this bill goes against the basic structure of the constitution.”

What does it mean for Muslims in India?

Muslims in India are the world’s largest minority, and if they were a country would be the seventh-most populous. But in the political imagination of Hindu nationalism they are seen as a threat: a minority afforded undue privileges by the country’s secular constitution, with alleged loyalties to India’s arch-rival Pakistan, a Muslim state.

“In Afghanistan,Pakistan and Bangladesh, Hindus, Sikhs, Buddhists, Christians, Parsis and Jains have been discriminated against. So this bill will give these persecuted people citizenship,” said Shah, introducing the bill. “If from these three countries, any Muslim petitions for citizenship, we will consider with an open mind but they will not get the benefit of this bill as the [Muslims] wouldn’t have been persecuted.”

In his speech, Shah drew on a popular Hindu nationalist narrative: that because India is officially a secular country not a Hindu one, its Hindu majority hasn’t had the historical privileges afforded to dominant groups in other countries — giving Muslims unfair power. The Citizenship Amendment Bill is an attempt to revoke that perceived power.

Lawmakers supporting the bill made clear their view that it was a step in the direction of achieving one of the BJP’s biggest goals: turning India into a Hindu nation. “There are Muslim countries, there are Jew countries, everybody has their own identity. And we are a billion-plus, right? We must have one identity,” Ravi Kishan, an actor turned BJP politician, told the New York Times.

“Couched in the language of refuge and seemingly directed at foreigners, the Citizenship Amendment Bill’s main purpose is the de-legitimization of Muslim citizenship,” writes Indian historian Mukul Kesavan in Telegraph India. “This destabilization of Muslim citizenship, this onus on all Muslims, potentially, to prove that they are ‘true’ citizens … will make second class citizenship for Muslims, the [Hindu nationalists’] holy grail, a reality. That will be the institutional inauguration of a Hindu [nation], the firm foundation of an Indian fascism.” 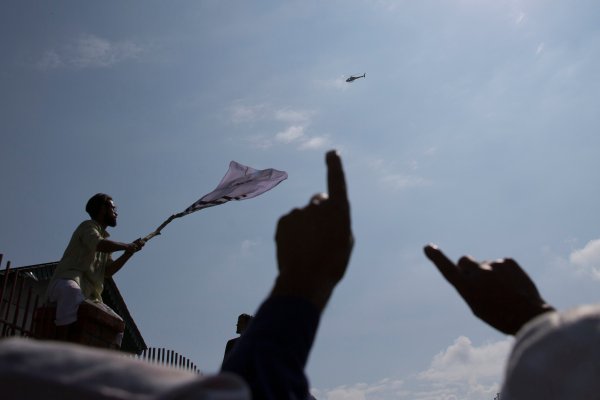 Recollections of a Long Siege in Kashmir
Next Up: Editor's Pick