The Battle for India's Founding Ideals

Ideas
By Madhav Khosla
Khosla teaches law and politics at Columbia Law School and Ashoka University and is the author of India’s Founding Moment.

They wore masks and carried sticks. On the evening of Jan. 5, a mob stormed into India’s Jawaharlal Nehru University, one of the nation’s most prominent centers of learning and an institution long associated with left-wing politics. Both students and faculty were indiscriminately attacked, many were left beaten and bleeding. Ambulances were prevented from entering the campus. Political activist Yogendra Yadav was only one of many who observed that the police let the situation persist without intervening. Journalists posted a video of the masked individuals, who are alleged to be linked to India’s ruling Hindu nationalist Bharatiya Janata Party (BJP), being allowed to depart in complete freedom.

These events come after much of India has been engulfed in protests over a new citizenship law that treats Muslims differently to those from other religions. These protests, which have seen tens of thousands march across the nation, began in universities. The government’s reaction was swift and brutal. It encompassed both prohibitory measures, such as Internet shutdowns and the prevention of public assembly, as well as reactive measures, which included detention and violence. In Uttar Pradesh, a state which is home to more Indians than any other, the tales of police brutality would send a shiver down any spine.

Sunday’s attack underscores two crucial changes taking place in the world’s largest democracy. The first is to the country’s formal legal architecture. India’s founders, as I have suggested in a new book, India’s Founding Moment, imagined citizenship to be unmediated by community affiliation. For them, to belong to the modern world was to belong to representative framework where each person was treated on free and equal terms. Measures like the new citizenship law challenge and undermine this founding vision. The law enables “any person belonging to Hindu, Sikh, Buddhist, Jain, Parsi or Christian community from Afghanistan, Bangladesh or Pakistan” to become an Indian citizen, thereby explicitly excluding Muslims.

India’s Constitution guarantees the right to equal treatment. This right applies to all persons and not only to citizens. To pass muster, a law has to make an intelligible distinction between those that it includes and those that it excludes. Moreover, this distinction has to bear a rational connection to the law’s objective. In this case, the stated objective is addressing the religious persecution of the enumerated classes. But the law does not capture this objective as it is both over- and under-inclusive. It does not provide protection to groups such as the Ahmadiyya Muslims from Pakistan and it assumes that all those who enter India from the specified classes are persecuted. This presumption is revealed by the fact that the law has no provisions relating to religious persecution at all, thus eliminating any link between the distinctions drawn and the declared aim.

The provisions make it clear that it is one’s religion that separates a person eligible for citizenship from an illegal migrant. Hindus and others belong to the former category; Muslims are condemned to the latter one. By using a religious-based test for membership, the law also breaches the Indian Constitution’s commitment to secularism, one that the Supreme Court has confirmed to be even beyond the power of a constitutional amendment. In a crucial decision in the early 1990s, the Court held that when a state government departs from secular principles, it amounts to the breakdown of constitutional machinery. But if the legal case against the law could hardly be stronger, the Court has rarely been so weak. In recent months, its authority appears to have been entirely eroded, and its decimation has paved the way for a new constitutional order to emerge.

The second change going on in India pertains to extra-constitutional violence. All societies face law and order challenges, and they all must confront the use of force by non-state actors. But the situation in India is of an altogether different nature. Here, one is faced with a case where some of the police force seem to share an inextricable relationship with the perpetration of force. The police are either directly responsible for the violence, as suggested by reports that have emerged out of Uttar Pradesh, where the very machinery of law and order appears to have been communalized, or responsible for providing cover for the violence, which appears to be the case in Jawaharlal Nehru University, where the masked men were allowed to run amok and then to run away. In either instance, there is now the creation and perpetuation of an extra-constitutional order.

As India is thrown deeper and deeper into a cycle of extra-constitutional violence, we should fear that the state and citizens will struggle to manage the situation. In such scenarios, the disorder and horror often follows a logic of its own. If India continues to unravel in this fashion, there will be unspeakable acts on either side, untold truths that are hidden in every quarter. Even the most terrifying moves will be justified, even the clearest forms of evidence will be challenged. In a world where public institutions and social harmony have given way, we will live under a state that claims monopoly over the exercise of force but no longer quite enjoys it. The state will deploy and exploit its power in every possible way, but, as in the case of colonial rule, the idea of legitimate authority will cease to have meaning.

If the story sounds familiar, it’s because it is. India wouldn’t be the first country to self-destruct, and its time may well have come. To stem the tide, to prevent a swift decline into communalism and authoritarianism, the outrage seen on the streets will need to translate into a robust and organized political opposition. In one of the images that spread across social media during the early days of the citizenship-related protests, students held images of Mohandas Gandhi and B. R. Ambedkar, among two of the most significant figures that laid the foundations for modern India. The image was telling in two respects. On the one hand, it gave the protests an anti-colonial feel, capturing the anger and fear that results from unbridled and unhinged state power. On the other hand, it revealed the need to recover past leaders, for no present ones exist. Many Indians are in search of a more contemporary reference point. Will they find it? 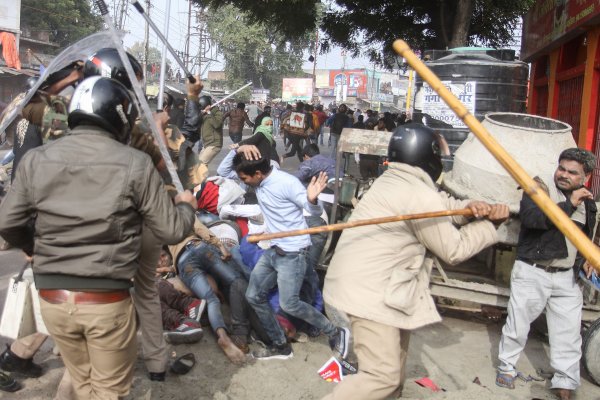 Why This Indian State Is Witnessing the Country's Most Violent Anti Citizenship-Law Protests
Next Up: Editor's Pick