The New Issue of Italian 'Vogue' Has Replaced Glossy Fashion Shoots With Illustrations, In Move Towards Sustainability

As is often the way when it comes to fashion, what’s old is new again: Vogue Italia‘s January 2020 issue is replacing its usual glossy photographs and editorial fashion spreads with illustrations. The reason? To reduce the environmental impact of photoshoots.

“This is the first time Vogue has done this since the introduction of photography in its pages in the early 20th century,” Condé Nast, Vogue‘s publishing company, said in a press release on Jan. 3. “The purpose of this rather bold move is, simply, to be more sustainable.”

What’s so wasteful about the magazine’s usual production? “One hundred and fifty people involved. About twenty flights and a dozen or so train journeys. Forty cars on standby. Sixty international deliveries. Lights switched on for at least ten hours non-stop, partly powered by gasoline-fueled generators. Food waste from the catering services. Plastic to wrap the garments. Electricity to recharge phones, cameras…” Emanuele Farneti, Editor-in-Chief of Vogue Italia said in a statement explaining the resources that went into the fashion editorials in the magazine’s September 2019 issue.

Fashion magazines’ September issues are renowned for being especially heavy due to coverage of the new season’s collections and campaign ads. Nonetheless, they offer insight into the scale of the resources spent on production.

“The challenge was to prove it is possible to show clothes without photographing them,” Farneti wrote in an Instagram post unveiling the covers. “This is a first… Vogue Italia has never had an illustrated cover: and as far as I know no issue of Vogue Italia in which photography is not the primary visual medium has ever been printed.”

Founded in 1892, Vogue‘s earliest covers were all illustrated; the magazine later became one of the first periodicals to run a cover with a color photograph in 1932, per the New York Times, amid a larger gravitation towards photography. Vogue Italia‘s January cover is the first time the brand has had an illustrated cover since “the introduction of photography in its pages in the early 20th century,” according to Condé Nast.

Farneti also wrote that the money saved by not producing photoshoots will be donated to the restoration of the Fondazione Querini Stampalia in Venice, Italy. The museum has been damaged by recent flooding, which scientists argue has been worsened by climate change.

Condé Nast said the issue is just one example of efforts being undertaken by the brand to be more sustainable — for example, Vogue Italia will reportedly change its packaging to 100% compostable plastic wrap in the next year. In December 2019, all 25 editors-in-chief of Vogue brands signed a new set of principles, which included a commitment to sustainability.

See all seven illustrated covers below: 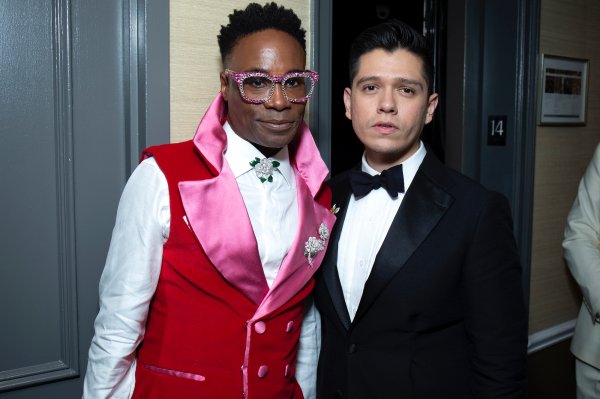 'You Must Wear the Clothes. The Clothes Must Not Wear You.' Let Billy Porter and His Stylist Explain the Story Behind His Buzzy Fashion Statements
Next Up: Editor's Pick