When you’re Jason Momoa — star of Aquaman, husband to Lisa Bonet, embodiment of Game of Thrones‘s Khal Drogo — it’s not what you wear that matters. It’s how you wear it. So perhaps it shouldn’t be a surprise that Momoa discarded his outer layers during Sunday night’s 2020 Golden Globe Awards and celebrated the evening in showbiz in just a simple tank top, a revelatory style moment that cameras captured while Succession actor Brian Cox was making his way to the stage to accept his own award at the 77th annual Golden Globes.

Note that Momoa donned a sleek velvet blazer and wore his long hair down for the obligatory red carpet shots — and for his presenter slot alongside Zoe Kravitz. But when it came time to party and chill at his table, the hair was up in a no-fuss bun and the jacket off. That’s the mark of a star who has become truly comfortable in the Hollywood melee. True, the Golden Globes are considered among the more raucous of the awards season bashes, but we rarely glimpse this approach to fashion and comfort among the suited-up men.

Sharp-eyed spectators also spotted that Momoa’s jacket was to be found on the shoulders of his wife, Bonet, seated beside him. As many of us know, large event spaces tend to be overly air-conditioned; this makes his sartorial move into even more of a gentlemanly gesture to his partner. Later in the evening at the event’s after parties, he kept up his more casual look, too. It seems no one is complaining about seeing more of Aquaman, in any case.

Momoa: one to watch, on and off the red carpet. 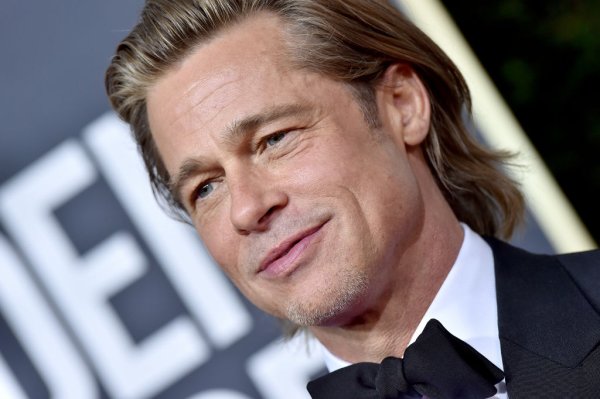 The Investigation Into What Brad Pitt Was Thinking in This 2020 Golden Globes Moment Has Launched
Next Up: Editor's Pick