If you’re going to pick someone to go up against in a trident throwing competition, it probably shouldn’t be Aquaman. Unfortunately, Jimmy Fallon had to learn that lesson the hard way.

During Thursday’s episode of The Tonight Show, Fallon challenged Jason Momoa, who towers over Fallon’s 6-foot stature at the height of 6-feet-4-inches, to what seemed like a near unwinnable battle for the late-night host.

Momoa—who made his big-screen debut as Aquaman in Justice League and reprised the role for the aquatic superhero’s forthcoming standalone movie—seemed determined to best Fallon from the start. He went so far as to take off his shoes and suit jacket before the contest even began

“You better knock before you come to my house!” Momoa roared after nailing his first throw.

“Alright! I’ll knock before I come to your house,” Fallon responded warily. “Whatever that means.” 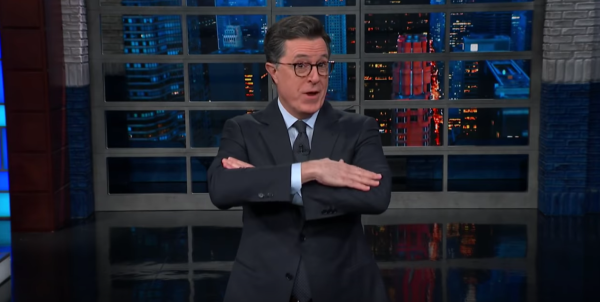 Of Course Stephen Colbert Has Plenty of Jokes About Trump at Bush's Funeral
Next Up: Editor's Pick