The Academy Awards are a celebration of Hollywood’s finest films, but the awards show gave TV fans something to cheer about, too. Backstage at the 2019 Oscars, there was a little Game of Thrones reunion when Emilia Clarke, a.k.a. Mother of Dragons Daenerys Targaryen, ran into Jason Momoa, a.k.a. her former husband, Khal Drogo, backstage. Both actors served as presenters at the 91st annual Academy Awards.

The former co-stars seemed genuinely thrilled to see each other so far from the Dothraki chieftain’s land. Momoa shared a photo of the reunion on Instagram, captioning the image, “So proud of you @emilia_clarke I love u with all my heart Aloha Drogo”, much to the delight of Game of Thrones fans everywhere.

The stars were both pretty in pink, appearing to color-coordinate their outfits, with Clark wearing a pink glittery Balmain gown, while Momoa opted for a pink velvet tuxedo that People reports was custom-made by the late designer Karl Lagerfeld.

While Khal Drogo and his Khaleesi may be one of Game of Thrones fans’ favorite couples, Momoa’s real- life wife, Lisa Bonet, was at the reunion, too. Momoa shared a photo of his “Queens” backstage at the celebration.

The eighth and final season of Game of Thrones will premiere on HBO on April 14. 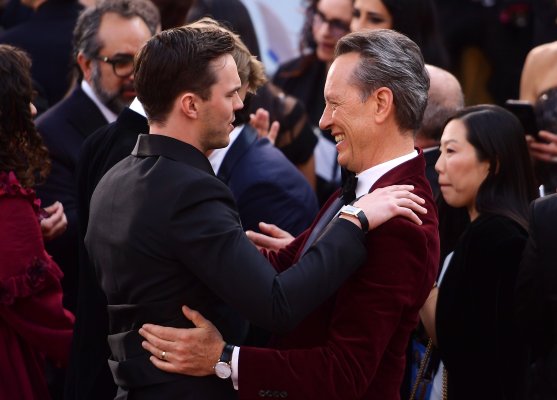