Brad Pitt was the subject of much discussion ahead of the 77th Annual Golden Globes on Sunday.

Would he interact with ex-wife Jennifer Aniston? How many adorable pictures would he take with co-star Leonardo DiCaprio? Would he take home another Golden Globe?

Those answers go as follows: no, many and yes.

Pitt told Entertainment Tonight on the red carpet that he and Aniston remain friends — Pitt walked away with a Golden Globe for his performance in Once Upon a Time in Hollywood and an adorable shoutout to his friend DiCaprio (a.k.a LDC, as Pitt called him during his acceptance speech).

Still, one question remains: What was he thinking about so seriously during the show?

It’s possible that he was wondering yet again why there wasn’t room for Jack on Rose’s door raft. 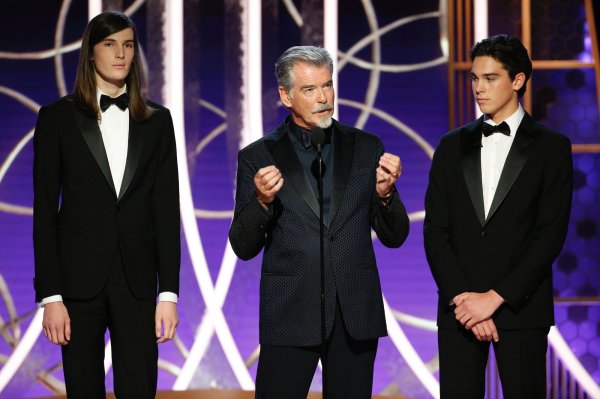 Pierce Brosnan’s Sons Trying to Shepherd the Famous People at the Golden Globes Was Highly Amusing
Next Up: Editor's Pick