‘Thank You, Ellen, For Giving Me a Shot at a Good Life.’ Kate McKinnon Delivers Moving Tribute to Ellen DeGeneres at the 2020 Golden Globes

In one of the most touching moments of 77th Annual Golden Globes on Sunday evening, Kate McKinnon presented Ellen DeGeneres with the Carol Burnett Award for Achievement in Television by sharing how the actor and comedian significantly affected the Saturday Night Live star’s life and inspired her career.

McKinnon told her personal story of realizing she was gay while watching DeGeneres’ sitcom, Ellen. “That’s a very scary thing to suddenly know about yourself,” she said. “It’s sort of like doing 23 and Me and discovering that you have alien DNA. And the only thing that made it less scary was seeing Ellen on TV.”

DeGeneres’ character came out as gay in a 1997 episode of the series, which was canceled one season later.

“If I hadn’t seen her on TV, I would’ve thought, ‘I could never be on TV, they don’t let LGBTQ people on TV,’ and more than that, I would’ve gone on thinking that I was an alien and that I maybe didn’t have a right to be here,” McKinnon said. “So thank you, Ellen, for giving me a shot at a good life.”

“She risked her entire life and her entire career in order to tell the truth, and she suffered greatly for it,” McKinnon continued. “Of course, attitudes change, but only because brave people like Ellen jump into the fire to make them change.”

In her acceptance speech, after joking that she had a secret husband named Mark and telling their fictional kids Rupert and Fiona to “go to bed” — with the camera cutting to DeGeneres’ wife, Portia de Rossi — the host of The Ellen DeGeneres Show said that positively affecting viewers’ lives was always her favorite part of the job. “All I’ve ever wanted to do is make people feel good and laugh. And there’s no better feeling than when someone tells me that I made their day better with my show.” 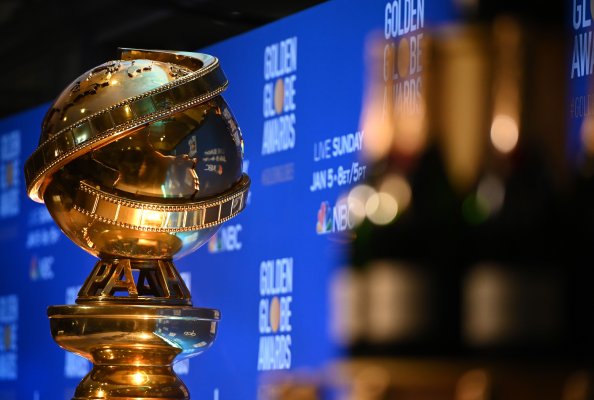 See All the Winners of the 2020 Golden Globe Awards
Next Up: Editor's Pick