Iran Has Vowed Revenge Against the U.S. for Killing Qasem Soleimani. Here's What May Happen Next

In the long-running shadow war across the Middle East, the United States and Iran have avoided direct confrontation at all costs. Their tense and unpredictable conflict has unfolded instead in covert operations through proxy forces, subterfuge and sabotage. So President Donald Trump’s order on Thursday to assassinate Qasem Soleimani, military commander of Iran’s elite Quds Force, in a high-profile drone strike outside the Baghdad airport has plunged the two adversaries into uncharted territory.

As the evening traffic unfolds in Tehran, a giant digital billboard in Haft-e Tir square displays an image of Maj. Gen. Qasem Soleimani, following his killing in Baghdad, on Jan. 3.
Kaveh Rostamkhani

The death of a man considered a hero by millions is a tectonic event that carries unknown consequences for Washington and Tehran and risks igniting a wider conflict that could engulf the Middle East. Khamenei called for three days of mourning on Friday, but promised vengeance. “His demise will not stop his mission,” Khamenei said, according to the Fars News Agency, a semi-official news outlet in Iran. “But the criminals who have the blood of General Soleimani and other martyrs of the attack on their hands must await a tough revenge.”

The Trump Administration, for its part, says it killed Soleimani in order to stave off more bloodshed. American officials said the U.S. received intelligence that Soleimani was planning another attack in the region. “We took action last night to stop a war,” Trump said during brief remarks at his Mar-a-Lago resort in south Florida, where he was vacationing. “We did not take action to start a war.”

The President’s remarks appear to be an attempt to ease tensions. But Administration officials privately warned members of Congress that Iran is expected to retaliate against the U.S., either at home or abroad, “within weeks,” according to a senior congressional staffer, who described a Friday briefing from the State and Defense Departments as well as U.S. intelligence agencies. “There is no indication that there is going to be a de-escalation in the near future,” the staffer says. “The only question is how bad is the retaliation going to be and where and what is it going to hit.” Administration officials did not immediately respond to request for comment.

President Trump walks off after delivering remarks on Iran at his Mar-a-Lago property in Palm Beach, Fla., on Jan. 3, 2020.
Evan Vucci—AP

Over the past six months, Iran has been blamed for several high-profile security incidents, including the protests outside the U.S. embassy in Iraq; the shoot-down of a U.S. surveillance drone over the Strait of Hormuz; the sabotage and seizure of several oil tankers near the Persian Gulf; the aerial bombardment of oil facilities in Saudi Arabia; and a rocket attack on a military base in Iraq, which killed an American contractor and injured four U.S. service members.

Close observers of the region fear the conflict could now move from low-grade, one-off attacks into a full-blown war. The Trump Administration on Friday urged all American citizens to leave Iraq “immediately” and bolstered the number of forces to the Middle East in anticipation of retaliatory violence. The Pentagon announced the deployment of about 3,000 soldiers from the 82nd Airborne Division to Kuwait, an “Immediate Response Force” that joins the 15,000 American troops sent to the Middle East since the situation with Iran began to deteriorate last spring.

White House National Security Adviser Robert O’Brien says Iran now has two options. “One is further escalation, and pursuing that path will lead to nowhere for the Iranian people or for the regime,” he told reporters on a conference call Friday. “The alternate path is for them to sit down with the United States; for them to give up its nuclear program; for Iran to stop its regional escapades and proxy wars in the Middle East; to stop taking hostages; and to behave like a normal nation as part of the community of nations.” O’Brien said the U.S. was willing to meet with Iranian leadership without preconditions. But the Trump Administration has delivered this message before, only to be rebuffed by Tehran.

But few U.S. officials believe Iran will choose the latter path. Tehran’s retaliation could range from a protracted campaign against U.S. forces in Iraq, Syria, Bahrain and elsewhere to terrorist attacks on American and allied embassies or other targets to cyberattacks, says a U.S. official who was not authorized to speak publicly on the matter. If the Iranian regime seeks to avoid an outright war it would be destined to lose, it might refrain from backing a major attack or renewed assaults on shipping in the Persian Gulf, the official says. Even a comparatively muted response could inflict significant costs, especially on oil shipping and facilities. Some energy experts estimate that even without a protracted conflict, oil prices could reach or exceed $150 a barrel, increased U.S. production notwithstanding.

“Definitely there will be revenge. There will be harsh revenge,” Iranian Ambassador to the U.N. Majid Takht Ravanchi told CNN’s Erin Burnett on Friday. “Iran will act based on its own choosing, the time, the place…We will decide.”

Despite such pledges, Soleimani’s killing may compel Tehran to think twice before they attack the U.S. or its partners, says Norman T. Roule, a former senior CIA officer who managed the Iran portfolio at the office of the Director of National Intelligence in both the Trump and Obama Administrations. “Iran will need to respond, but the way they do so must simultaneously save face without risking a broader conflict,” Roule says. “Regime survival must be their primary goal.”

Douglas Silliman, a former U.S. ambassador to Iraq and Kuwait who is now president of the Arab Gulf States Institute in Washington, says Iran is patient and may not respond immediately or directly. “Retaliation against this strike may not necessarily come against American targets,” he says. “You could see a variation on what you’ve seen the past four months,” including strikes on Saudi oil facilities and shipping as in the past, all the way up to U.S. targets. “There are plenty of American targets in the Gulf,” Silliman adds, “not just soldiers and sailors and airmen and marines, but spouses and children as well.”

Iran is also likely to respond using allies, rather than its own forces, following Soleimani’s lead as Quds commander in activating proxy forces to launch attacks against the U.S. and its allies. Soleimani oversaw Iranian-backed groups such as Lebanon’s Hezbollah, which among other things attacked the U.S. Embassy and Marine barracks in Beirut in 1983. The Pentagon assessed in April that Iran-backed militants killed at least 603 U.S. troops in Iraq, or 17% of all Americans killed between 2003 and 2011.

Through these forces, Tehran is involved in every single major military conflict in the Middle East, almost always on the side of America’s enemies. Israel and Gulf nations have pressured the White House to address what they see as a growing Shi’ite sphere of influence across the region. The personal relationships Soleimani forged in the region will be hard for Iran to replace, but the Islamic Revolutionary Guard Corps and Quds Force are organized, hierarchical military machines that are sure to follow their new command, Silliman said. Iran named Soleimani’s successor, Brigadier General Esmayeel Qaani, in less than 24 hours.

America’s allies in the region, including Saudi Arabia, Qatar and Bahrain are likely targets of Iranian military or cyber retaliation. Iran already has attacked the computer networks of Saudi Aramco oil company and Qatar’s Rasgas natural gas company. There could be plots far beyond the region, says Eric Edelman, former ambassador to Turkey under President George W. Bush. “They will look for ways to hit us where we don’t expect it,” he says. “But they will be patient. When their nose is bloodied, they tend to take a step back and reassess, before making the next move.”

Analysts fear that if Iran misjudges Trump’s willingness to use force, the conflict could quickly spiral out of control. The Trump Administration has been hollowed out by departures within the State, Homeland Security and Defense Departments, and much of the National Security Council deliberation processes have been eliminated.

Trump has already authorized cyber attacks against Iranian computer systems, increased the U.S. troop presence in the region and continued to ratchet up its “maximum pressure” campaign. The Administration has imposed tougher economic sanctions since walking away from the 2015 six-nation deal to curb Iran’s nuclear-weapons program more than a year ago.

Partly as a result, Iran’s economy is collapsing and the population is exhausted and frustrated, says Gerard Araud, a former French ambassador to Washington and the U.N. Even in Lebanon and Iraq, citizens are demonstrating against Iranian influence. Tehran recognizes it is in a difficult situation.

“People are talking about World War Three. The Iranians are not suicidal. The regime has always been very shrewd and very keen on surviving,” Araud says. “The options of what the Iranians can do are very limited. Trump didn’t react in September to the Iranian provocation, but now they know he is ready to react and he is totally unpredictable—because no one was expecting this—and he is brutal. So they have to calculate their response in a very prudent way.” 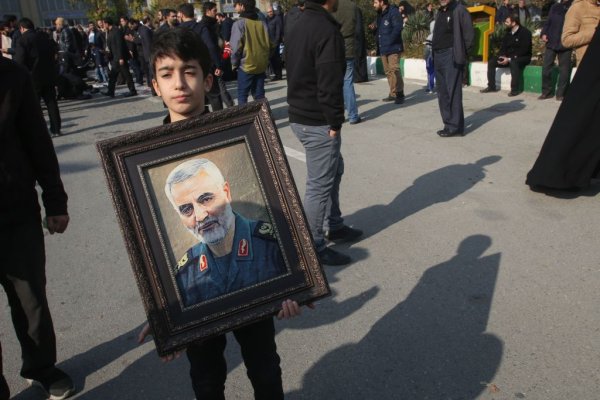 Qasem Soleimani's Assassination Opens a Pandora's Box in the Middle East
Next Up: Editor's Pick