Senator Bernie Sanders announced Thursday that his fourth quarter fundraising haul came to $34.5 million dollars, a massive sum that — barring major surprises — is likely to be the biggest from any Democratic presidential candidate for the final three months of 2019.

It’s a show of force for Sanders, who had a strong end to the year despite his heart attack in early October. For context, his own third quarter fundraising haul came to more than $25 million.

Most other Democratic presidential primary candidates have yet to announce how much they raised for the quarter, but former South Bend, Ind. Mayor Pete Buttigieg’s campaign has said his donations came in totaling $24.7 million. Businessman Andrew Yang announced a fourth quarter total of $16.5 million on Thursday morning.

Sen. Elizabeth Warren has yet to release her final 2019 fundraising numbers, but announced a $20 million goal for the end of the year.

Sanders “is proving each and every day that working class Americans are ready and willing to fully fund a campaign that stands up for them and takes on the biggest corporations and the wealthy,” campaign manager Faiz Shakir said in a statement. “You build a grassroots movement to beat Donald Trump and create a political revolution one $18 donation at a time, and that’s exactly why Bernie is going to win.”

The campaign said that December was the campaign’s best fundraising month to date since Sanders launched his campaign in February, noting that more than $18 million came in that month alone. Sanders has also, the campaign announced Wednesday, received more than five million individual contributions, “more contributions than any campaign has received at this point in a presidential election in the history of our country,” the campaign said in a note to supporters sent out in the new year.

The Sanders campaign has long boasted a loyal following, but it also announced on Thursday that nearly 300,000 new donors gave to the campaign in the fourth quarter, with more than 40,000 donors coming in on the final day.

Read more: Bernie Sanders’ Campaign Is Looking Strong. But Can He Grow His Base?

Though it is unclear how much money Sanders has on hand, weeks ahead of the Iowa caucuses, he is sitting strong in fundraising and continuing to poll consistently as a front runner. His grassroots fundraising also continues to be enviable: The campaign announced his average donation for the quarter was $18.53, and added that 99.9 percent of its donors have not maxed out and can contribute again.

Earlier this week, Sanders also released three letters from medical professionals stating that he is in good health for the presidency should he win it, though he has yet to release full medical records. One of the letters said Sanders is “in good health currently,” and gave further insight into the Senator’s recent heart attack, noting that he’d undergone further consultation and found to be fit to return to “vigorous activity without limitation.”

At 78, Sanders faced scrutiny following the medical emergency. Nonetheless, his campaign leveraged his return to the campaign trail as a comeback, and he’s enjoyed high profile support from the likes of Rep. Alexandria Ocasio-Cortez to Ariana Grande. 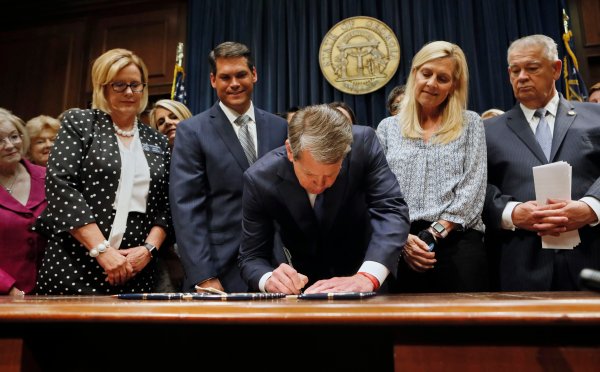 How Conservatives Use Civil Rights Law to Restrict Abortion
Next Up: Editor's Pick