It was almost inevitable that questions around age and health would come up at Tuesday night’s Democratic primary debate after Sen. Bernie Sanders’s heart attack, but he had not even been asked about his health when he volunteered information about his wellbeing: “I’m healthy, I’m feeling great,” he said, adding a quip.

“We are going to be mounting a vigorous campaign all over this country. That is how I think I can reassure the American people,” Sanders then responded when he was asked how to make voters feel better about his age and the fact that he’d just had a heart attack at the beginning of the month.

Sanders was lively and sharp at the debate, on topics from impeachment to health care, making clear arguments and avoiding any self-inflicted setbacks. He even smiled out of eagerness to answer when asked a question about his tax plan, and whether its purpose was to tax billionaires out of existence.

It also helped that while he was still on stage on Tuesday, The Washington Post first reported that New York Rep. Alexandria Ocasio-Cortez plans to endorse Sanders on Saturday. Ocasio-Cortez, a progressive with national recognition who volunteered for Sanders’s 2016 campaign, is seen as a major endorsement for a presidential candidate.

Shortly after the debate, Minnesota Rep. Ilhan Omar, another member of the so-called “squad,” an outspoken quartet of progressive House freshmen, also made her Sanders endorsement public. Earlier Tuesday, Sanders and Omar announced legislation that would prohibit public schools participating in federal school meal programs from denying meals to students.

The stakes were high for Sanders on Tuesday, who was making his first campaign trail appearance since he had a heart attack on Oct. 1. It was clear to onlookers that he was going to have to mount some sort of comeback.

“Determined. Focused,” said Tracy Sefl, a longtime Democratic strategist who has previously worked for Hillary Clinton when asked what she made of Sanders on stage. “Aware of the scrutiny and standing up for it.”

While he rested at his home in Burlington, Vt., Sanders, who had been campaigning at a relentless pace prior to the medical emergency, acknowledged that he would have to cut back on the number of events he participates in.

In the days ahead of the debate, his campaign announced his first public rallies since the heart attack as well: A “Bernie’s Back” rally in New York City on Saturday (where Ocasio-Cortez is the special guest, a Sanders campaign aide confirmed to TIME) and a rally to highlight his new corporate accountability plan in Des Moines on Friday, Nov. 1. He also has a planned trip to Iowa next week and will travel to South Carolina that weekend.

During Sanders’s absence, his campaign did all it could to keep up momentum, sending surrogates to early states, moving forward with an ad buy in Iowa, and continuing policy rollouts. But doubts lingered over his candidacy as questions of health and age took center stage.

“I don’t know how big of a deal that will be for people, but I think people should think about it. I think it’s a concern,” said Joshua Elder, an emergency physician who serves as the chair of the El Dorado County Democrats in California, prior to the debate. Elder added that he thought people should take medical records — which Sanders has said he plans to release — into account.

Sanders is the oldest Democratic candidate running for President, but the other two front runners — former Vice President Joe Biden and Sen. Elizabeth Warren — are also septuagenarians. They were also asked about their age at the debate Tuesday night.

Politically, the health setback had unfortunate timing for Sanders: In recent national polls, Warren has been coming out ahead of Sanders. The Quinnipiac poll released the day before the debate showed Warren and Biden about even, with Warren coming in at 30% support and Biden with 27% support (the margin of error was 3.5 percentage points). Sanders was a distant third with 11% support, and South Bend, Ind. Mayor Pete Buttigieg close at 8%.

“I have heard from some supporters who have kind of fallen the other side of the fence away from Bernie Sanders because of [his heart attack],” said Bryce Smith, chair of the Dallas County Democrats in Iowa, on Monday. “All of a sudden age and health is kind of a factor, where before it was kind of, sure, he’s older but you know, he’s going, he has these different ideas, these new ideas.”

Ahead of the debate, Sanders also sought to create some distance between himself and Warren, a close friend of his and Senate colleague. In an interview with ABC News, Sanders pointed out that Warren has been quoted calling herself a “capitalist through her bones,” noting that “there are differences between Elizabeth and myself.” Though at the debate, they avoided any bitter argument with each other.

Prior to his heart attack, Sanders had positioned himself as a strong candidate in a wide field with staying power. In the third fundraising quarter, his campaign announced he’d out-raised the rest of the competition, boasting a more than $25 million haul. Though the questions of if or how Sanders’s heart attack will have long-term ramifications on his campaign remain open.

“My personal reaction is like, you’re 78 years old, dude, how long do you think you’re going to be lucky?” said Peter Minett, the chair of the Nevada County Democrats in California, who told TIME in a phone interview that he’s supporting Sen. Amy Klobuchar. “Don’t you want to just chill for a while and hang out with your wife and kids and grandkids? Clearly that’s a reflection of my own personal sentiments and values.” 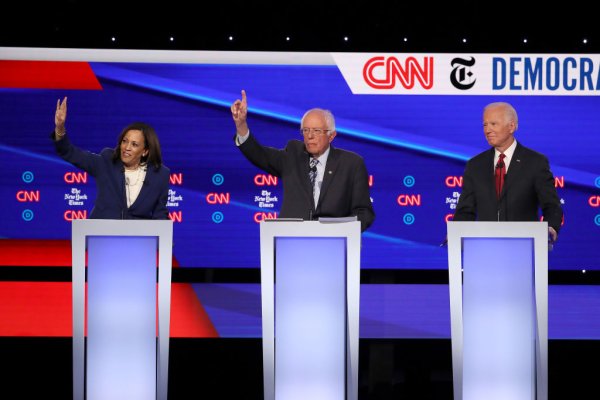 Fact-Checking the Candidates' Claims From the Fourth Democratic Debate
Next Up: Editor's Pick