Ringing in a New Decade: See How New Year's 2020 Is Celebrated All Over the World

When the clock hit midnight on Jan. 1, 2020, a new decade began. As New Yorkers prepared for the famed ball to drop in Times Square and folks across the U.S. were going about their day Tuesday, other cities worldwide were already ringing in the New Year.

In Australia, revelers celebrated the moment with fireworks by the Sydney Opera House and above Melbourne’s skyline. Many in Seoul saw paper lanterns. Singapore’s luxurious Marina Bay celebrated with fireworks. In Hong Kong, pro-democracy protests continued.

New York City’s Times Square reportedly had more than one million people gather to watch the ball drop, where many had been waiting since the early morning to snag a spot. As part of the annual televised event, Dick Clark’s New Year’s Rockin’ Eve, revelers both at home and in person saw performances by Post Malone, BTS and Sam Hunt.

The West Coast rang in the decade with fireworks over the Las Vegas Strip at 3 a.m. EST.

Fireworks illuminate the skyline over the Las Vegas Strip during an eight-minute-long pyrotechnics show put on by Fireworks by Grucci titled "America's Party 2020" during a New Year's Eve celebration on January 1, 2020 in Las Vegas, Nevada. About 400,000 visitors gathered to watch more than 80,000 fireworks shoot from the rooftops of seven hotel-casinos to welcome the new year.
Bryan Steffy—Getty Images

After a year filled with protests, Parisians celebrated 2020 together with a light show at the Champs Elysees, illuminating the Arc de Triomphe. The clock hit midnight at 6 p.m. EST on Tuesday.

Londoners celebrated with fireworks surrounding the London Eye at 7 p.m. EST, followed by a parade for New Year’s Day on Wednesday.

Berlin’s new year kicked off with fireworks above the Brandenburg Gate at 6 p.m. EST.

Fireworks shot above the General de Gaulle bridge in Abidjan at 7 p.m. EST.

Fireworks light up the sky over the General de Gaulle bridge and the Ebrie lagoon during New Year's celebrations in Abidjan early on Jan. 1, 2020.
Sia Kambou—AFP/Getty Images

Sixteen hours ahead of New York, the clock struck midnight and a new decade began in Australia at 8 a.m. EST. Fireworks lit up the sky behind the Sydney Opera House.

Southwest of Sydney, the city of Melbourne lit up for 2020 at midnight, too.

The decade began in Japan at 10 a.m. EST The new year is special in Japanese culture as it is considered a time to pray for one’s family.

Japanese priestess prepare for New Year prayers at Kanda Myojin Shrine in Tokyo on December 31, 2019. Millions of Japanese people will visit shrines and temples across the country during the first three days of the new year to pray for the well-being of their families.
Kazuhiro Nogi—AFP/Getty Images

Lanterns were lit up in Seoul to mark the new decade at 10 a.m. EST.

Fireworks at Marina Bay drew huge crowds in Singapore, when the day changed at 11 a.m. EST.

Singapore awaits 2020 with curtain-raiser fireworks by Star Island as revellers join in the biggest countdown celebration at Marina Bay on December 31, 2019 in Singapore.
Suhaimi Abdullah—Getty Images

12 hours ahead of New York, the new year was counted down in Bangkok outside of a shopping mall at 12 p.m. EST.

Celebratory fireworks went off in Moscow at 4 p.m. EST.

Fireworks explode over the Kremlin in Moscow during New Year celebrations, on January 1, 2020.
Dimitar Dilkoff—AFP/Getty Images

The July 15 Martyrs’ Bridge lit up in red and blue as fireworks soared high above for the new year at 4 p.m. EST. 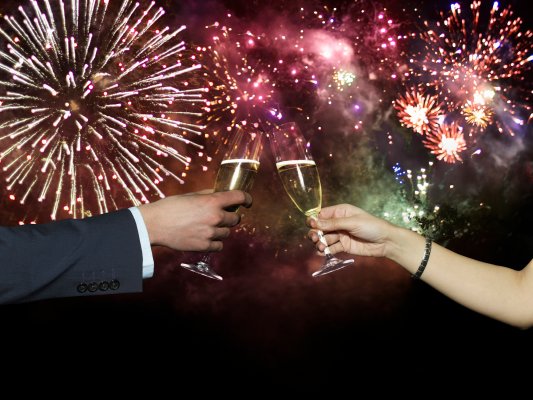 Here's Everything Open and Closed on New Year's 2020
Next Up: Editor's Pick