After four weekends of watching chaos unfold on the streets of Paris, Emmanuel Macron decided he had to do something. In a televised address on Monday the French President announced a series of measures designed to placate the gilets jaunes or “Yellow Vests,” whose protests against a planned fuel tax rise have escalated into a much broader rejection of his leadership.

The concessions include canceling the fuel tax hike indefinitely, raising the minimum wage by 7% (about $113 a month), and scrapping levies on overtime and pensions. Altogether they are expected to cost the government between $8.1 billion and $10.1 billion, according to officials.

The sudden concessions seemed to confirm the popular image of France as a country that has never quite left behind its radical 1789 revolution, a place where strikes and protests are second-nature, a nation whose angry masses have a far greater influence over their embattled leaders than social movements in the U.S. do. Indeed, American protests to which the Yellow Vests have been compared — Occupy Wall Street, the Tea Party movement — have failed to exact such concrete changes.

So why do French protesters have an edge over their American counterparts? TIME spoke to Paris-based political analyst Eddy Fougier and Gerd-Rainer Horn, a professor of political history at Sciences Po in Paris, about how and why that situation came to be.

Is there really a French revolutionary spirit?

Yes. The widespread public support enjoyed by the Yellow Vests, with 68% of people still sympathetic to them according to the latest poll, reflects the openness of French society to radical movements, says Horn. “When protests erupt in the U.S., the instinctive reaction of much of the population is kind of skepticism or even dislike,” he says. “In France, there’s much less reticence about them, and you even have a contagion of the protest mood between different communities.”

Students and farmers have both taken a cue from the Yellow Vests to begin demonstrating, in an echo of what happened during the famous May 1968 protests. Back then, a revolt by university students against the prevalence of capitalism and conservative values in public life spread to factories and other blue-collar workplaces, paralyzing the economy for weeks.

It’s not clear exactly why the French love to protest, but Fougier says it’s part of a national “culture of conflict” that goes all the way back to the 1789 French Revolution, when republican forces battled royalists to overthrow the hated French monarchy. “We almost like to re-run the French Revolution, over and over,” Fougier says. “We debate things in a very heated way, as if we’re fighting a permanent, peaceful civil war over what our country should be.”

Not always. Months of strikes by railway workers this summer failed to kill Macron’s overhaul of France’s train system. And widespread demonstrations couldn’t stop stop labor reforms by his predecessor François Hollande in 2016, nor an increase to the retirement age in 2010 under former President Nicolas Sarkozy.

But French protests do have “a higher success rate than in the U.S.,” says Horn. Agricultural protests, for example, have often led to concessions to the farming community. In 2009, fishermen secured $66 million in government loans by blockading the Port of Calais over anger at E.U. limits on their industry. Protests have also curtailed officials’ ability to change France’s work culture; in 2006 the government was forced to drop an attempt to loosen restrictions on firing young people after violent street protests.

Plus, even where protests have failed, France’s protest culture has made controversial laws harder and slower to pass, and forced presidents to pay the price for upsetting the public. (Macron’s approval ratings are languishing at 21%, Sarkozy lost his re-election bid and Hollande famously didn’t even try for a second term.)

Why do protests in France exert a stronger influence on politics than protests in the U.S. do?

According to Horn, a significant advantage for French protestors is the make-up of France’s parliament. There are nine different parties with seats in the National Assembly. “So you have lawmakers from different parties, who are all listened to, who are willing to quickly translate the protesters’ message from the streets, into the halls of government,” he says.

France’s 2017 elections made the voices represented in parliament even more diverse, with Macron’s centrist En Marche movement toppling the two establishment parties, the Republicans and the Socialists. His main opposition comes from the far-right National Rally (formerly known as the National Front) and far-left France Unbowed, both of whom have been very willing to champion the Yellow Vests’ cause.

In contrast, the U.S.’ rigid two-party system has meant the GOP and the Democrats have dominated the House and the Senate for more than a century. While individual lawmakers may take up a particular cause, few are willing to stake their career on an unpredictable group of protesters, “so American protest movements are left suspended in mid-air,” Horn says, “because there’s no one in power acting as a spokesperson for them.”

Why do French protests put so much pressure on the President?

Fougier says that concessions like the ones Macron made this week are made more likely by the “extreme concentration of political power within the French presidency.” Over the course of the 20th century, reforms designed to give France a strong leader made the president less accountable to parliament (he cannot be impeached, for example) ­and more able to dictate policy without consulting the legislature (hence, why Macron can abruptly decide to raise the minimum wage). The office is often referred to as the most powerful in the democratic world, with some nicknaming France a “republican monarchy.”

With power so concentrated, protests movements have a single figure to take aim at; they know one person can solve their problems. “It’s a very fragile system,” Fougier says. “Because the president knows that he can respond to the protests.”

And, if he wants to save his own popularity, he must. 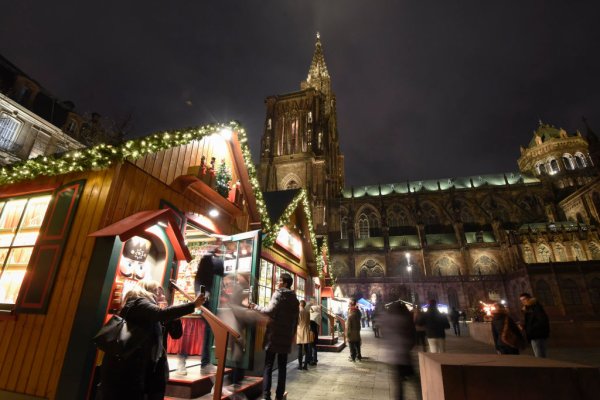 Suspect in Strasbourg Attack Killed in Shootout
Next Up: Editor's Pick