In a stunning split-screen moment in U.S. history, President Donald Trump spoke onstage at a rally in Michigan before a cheering crowd while the House of Representatives simultaneously voted to impeach him back in Washington. In a speech that lasted just over two hours, one of his key messages to the thousands of voters who came out to support him in Christmas hats and “Make America Great Again” caps was that the first-term impeachment marks an attempt to undo the results of the 2016 election.

“Democrat lawmakers do not believe you have the right to select your own president,” Trump said Wednesday night, appearing incensed but still seeming to enjoy himself onstage in an unusually long and meandering speech. “They think the Washington swamp should be able to veto the results of an election.”

In many ways, the event in the aptly named city of Battle Creek proceeded like a typical Trump campaign rally, with cheering fans, an energetic president and high decibel levels. Trump himself noted the disconnect: “By the way, it doesn’t really feel like we’re being impeached,” he said shortly after appearing onstage. But the rally occurred on one of the most pivotal days of Trump’s presidency and an extraordinary moment in the history of the country. As he delivered his speech, Trump became the only elected first-term president ever to be impeached, and just the third president to be impeached in the nation’s 243-year history, allowing him to deliver a real-time rebuttal of the momentous proceedings directly to his supporters in a key battleground state.

After about 40 minutes talking about other topics like job creation and his victory on election night in 2016— he was referring to Space Force, nuclear submarines and a military F-35 plane, among other things, at the moment the House reached the threshold of votes to impeach him on abuse of power— Trump turned to impeachment. But, when it turned to the subject of the House vote, his message was that Democrats were trying to steal the election from voters, both undoing the results of 2016 and attempting to take away their ability to decide again in 2020. “Tonight, House Democrats are trying to nullify the ballots of tens of millions of patriotic Americans,” Trump said, flanked onstage by Christmas trees.

“We have an election right down the road,” Trump continued, noting he officially announced his reelection campaign months ago. “I’ll give you a little clue: I announced because I figured once I announced, they’d never try to impeach, nobody would be so stupid.” Democrats have said they pushed ahead with impeaching Trump less than a year before the election because he attempted to influence the outcome by linking congressionally approved foreign aid to Ukraine with an investigation into the family of former Vice President Joe Biden.

Trump’s rally was as much a rebuttal to the impeachment vote as it was counter programming. He spent most of the night on other topics, riffing on Pete Buttigieg, Bill and Hillary Clinton, and the recent Justice Department Inspector General’s report on the origins of the FBI investigation into Trump’s campaign. He touted the economy and his record of confirming conservative judges. He seemed at ease onstage, evidenced both in his demeanor and by the length of the rally, despite the stunning rebuke to his presidency that had just occurred.

But as he took long diversions into other topics, he kept returning to impeachment. Chants of “four more years!” broke out during the rally, highlighting the unusual circumstance: Trump may be the third president in U.S. history to be impeached, but unless he is removed from office by the Senate, he will be the first impeached president ever to run for reelection. And Wednesday night, he seemed optimistic about his prospects. “With Richard Nixon, I just see it as a very dark era,” Trump said. (President Nixon resigned in 1974 in the face of near certain impeachment over the Watergate scandal.) “I don’t know about you, but I’m having a good time,” Trump said. “I’m not worried.” 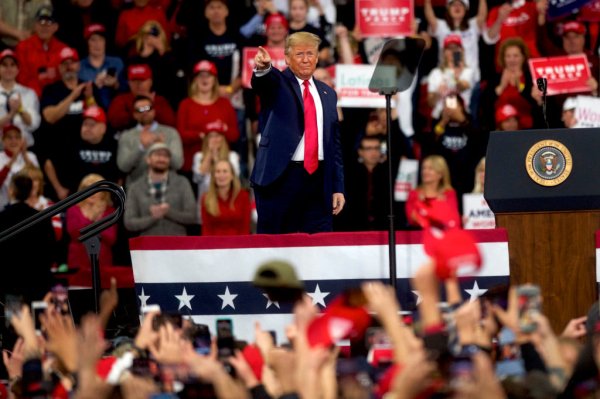 Why Impeachment Could Make Trump's Presidency Stronger
Next Up: Editor's Pick