President Donald Trump still gets incensed when clips of impeachment proceedings flip up on the flat screen TV in his private dining room off the Oval Office. He still drops an occasional F-bomb about being impeached, says a senior White House official. But in the past several days, as the headlines careened toward Wednesday’s historic House vote that made him the only elected first-term president to be impeached, White House officials — who requested anonymity to speak candidly about internal discussions — say the proceedings, as frustrating as they have been, have strengthened their hand in negotiating with the House and by mobilizing Trump’s base of support.

“I think it absolutely makes him stronger,” a senior aide to Trump tells TIME. The team has tried to play the hand as best they can, fundraising for his campaign, rallying support, and working to leverage House Speaker Nancy Pelosi’s desire to show Democrats can run impeachment while at the same time get bills to Trump’s desk. And Trump, they say, is coming around to the idea. “It’s almost like the President when he’s under pressure is calmer,” says a second White House official.

Trump didn’t come off as particularly calm in a scathing letter he sent to Pelosi on Dec. 17, accusing her of “violating your oaths of office” and “declaring open war” on American democracy. “Your spiteful actions display unfettered contempt for America’s founding and your egregious conduct threatens to destroy that which our Founders pledged their very lives to build,” Trump wrote.

Despite his impulse for vitriol, Trump acknowledges that impeachment may not be all bad for him as he gets ready to pivot from a Senate trial to the campaign trail in 2020. “It’s a very sad thing for our country but it seems to be very good for me politically,” Trump said on Dec. 13, sitting in the Oval Office next to the President of Paraguay.

Trump’s political advisors acknowledge that any incumbent would rather run for reelection without the shadow of impeachment hanging over the campaign. But now that it’s all but inevitable, Trump’s team is trying to extract the maximum political cost from Democrats. His campaign has blasted out thousands of social media ads around impeachment that has generated a spike in fundraising in recent weeks. In addition, they say, the Democrats’ desire to not let impeachment clog up the workings of government has created an opening in last-minute budget and bill negotiations that could drive policy gains that Trump wants, like increasing military pay, getting more flexibility to spend federal funds on Trump’s border wall, further rolling back provisions from President Obama’s Affordable Care Act, and passing the USMCA trade deal.

But there are effects from the Democrats’ attempts to rein in the President that will reverberate far beyond Trump’s own reelection prospects. Trump and the House have been playing a game of constitutional chicken over executive power that hasn’t been won or lost yet. The ultimate outcome of multi-front battles over presidential authority, balance of power, and the FBI’s ability to surveil Americans could recalibrate the use of executive power for a generation.

One of the key issues during the House impeachment inquiry has been whether top administration officials, including former National Security Advisor John Bolton, Acting Chief of Staff Mick Mulvaney, and Secretary of State Mike Pompeo, would have been legally required to testify by the House after the President blocked them from appearing, claiming presidential immunity. A lower court ruled in a case related to former White House Counsel Don McGahn that the president could not block top aides from testifying based on a such a broad claim, and the White House has appealed that decision. A senior administration official says the question is still being litigated in that and other cases, though Democrats have pushed ahead with the impeachment process before it was resolved or the witnesses were ordered by a court to testify. “It’s not like we were running out the clock. We were litigating the issue, but the Democrats had an artificial timetable,” the senior administration official says. “As an evidentiary matter and as a matter of fact, these people were not compelled to testify in the House impeachment inquiry, and I guess we can consider that a victory.”

Soon similar questions will head to the Republican-controlled Senate, where lawmakers have signaled they will protect the White House’s interests. Senate Majority Leader Mitch McConnell has already rejected Senate Democrats’ request to hear from Bolton, Mulvaney and other fresh witnesses, and McConnell has said he’s coordinating closely with the White House counsel’s office on how to run the trial. “There will be no difference between the president’s position and our position as to how to handle this,” the Senate leader said on Dec. 12, adding that there is “no chance” Trump will be removed from office. Judiciary Committee Chairman Lindsey Graham, a Republican from South Carolina, said he’s already made up his mind in Trump’s favor and won’t “pretend to be a fair juror.” “This thing will come to the Senate and it will die quickly,” Graham said on Dec. 14. “And I will do everything I can to make it die quickly.”

That has incensed House Democrats, who say the cooperation between the Senate Republicans and the White House amounts to a breakdown of a fair process. “In other words, the jury — Senate Republicans — are going to coordinate with the defendant — Donald Trump — on how exactly the kangaroo court is going to be run,” Rep. Hakeem Jeffries, a Democrat from New York, said on Dec. 12.

As Trump and his allies continue describing impeachment as a continuation of a three-year-long witch hunt designed to oust him, the Justice Department’s top watchdog released a bombshell report in December that detailed shocking errors and lapses in the process to surveil a member of the Trump campaign in 2016. Horowitz found 17 “significant inaccuracies and omissions” over the course of four Foreign Intelligence Surveillance Act (FISA) applications to surveil Trump campaign aide Carter Page. Broadly, Horowitz determined that the FBI investigation into the Trump campaign’s contacts with Russia was lawful and had a legitimate justification. He did not find documentary or testimonial evidence that political bias influenced FBI agents’ decisions to push forward with the flawed FISA applications, but he said he never received a satisfactory explanation for the errors.

The FISA court was created in 1978 after it was revealed that President Richard Nixon had abused the power of the FBI for his personal political interests. The secrecy of the court has been criticized in past years, and the FISA process has gone through a number of reforms. “You see these pendulum swings every time there’s a big crisis,” Asha Rangappa, a former FBI special agent, says of reforms in the FISA process. FBI Director Christopher Wray adopted a chastened tone in response to Horowitz’s report, saying in a letter that he has ordered more than 40 “corrective steps” to be taken at the bureau in the wake of Horowitz’s report, including modifying FISA processes for both applications and renewals.

But Trump has nevertheless seized on the FBI’s lapses. In his letter to Pelosi, Trump invoked the report, but primarily as a way to distract from impeachment and to cast it in the same context as what he perceives to be a conspiracy of people in the government working against him. “If you truly cared about freedom and liberty for our Nation, then you would be devoting your vast investigative resources to exposing the full truth concerning the FBI’s horrifying abuses of power before, during, and after the 2016 election,” Trump wrote, “including the use of spies against my campaign, the submission of false evidence to a FISA court, and the concealment of exculpatory evidence in order to frame the innocent.”

Once the Senate trial gets underway, there will be many more weeks of attention brought to Trump’s actions that led to his impeachment by the House. His aides may see a silver lining, but the idea that the president would emerge stronger from being impeached by the House “sounds to me like White House spin,” says Timothy Naftali, a presidential historian at New York University and former director of the Richard Nixon Presidential Library and Museum. Given Trump’s support among Senate Republicans, the chances were never high Trump would be removed, Naftali added, saying: “The White House stonewalled the type of information that might have provided a tipping point. And I say might — we may never know.” 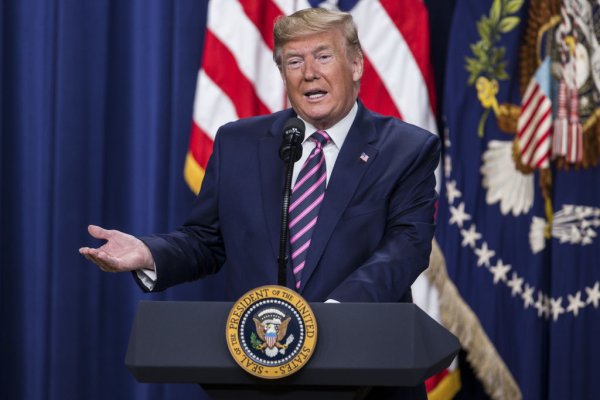