Two Democrats broke with their party to vote against a resolution the House passed on Thursday formally outlining procedures for the next phase of the impeachment inquiry into President Donald Trump.

The resolution passed 232-196 in a vote that stayed largely along party lines. No Republicans voted in favor, though former Republican Rep. Justin Amash, who left the GOP to become an Independent this summer, did support the resolution. Reps. Jeff Van Drew and Collin Peterson were the only two Democrats who voted against it.

The impeachment process, sparked by concerns over whether Trump used his position as President to pressure Ukraine to investigate a political rival, has already been sharply criticized by Republicans. While the two Democrats’ decision to vote against the impeachment resolution on Thursday did not come as a surprise, it was immediately used by GOP leaders to further rail against the process.

Here’s what you need to know about these two Democrats and why they opposed the resolution.

Van Drew, a moderate Democrat, represents New Jersey’s 2nd Congressional district, which voted for Trump in 2016. He is one of several moderates who flipped a GOP district — by a margin of 8 points — to win his seat in the 2018 midterms.

Before Thursday’s vote, he had also been one of a handful of Democrats who had not supported impeachment. Van Drew explained that he had resisted sticking with his party because he was concerned that the impeachment process was becoming too partisan, and that it could backfire if Trump does not end up being removed from office.

“He will still be president, and he will still be the candidate, but he will say — and will be correct — that ‘I’ve been exonerated,’” Van Drew tells TIME, predicting that the Republican-controlled Senate will likely support Trump in any potential impeachment trial.

He added that impeaching a president in a process perceived as partisan could set a dangerous precedent.

“Impeachment is a really, really, really high bar,” Van Drew says. “We’re going to split the country apart, even further because of all this, which I think is bad.”

Peterson has represented Minnesota’s 7th Congressional district since 1991. His district, which includes much of the western part of the state, is heavily rural and voted for Trump in 2016 by more than 30 points. He also faces a 2020 challenge from Minnesota’s conservative former Lt. Gov. Michelle Fischbach.

Like Van Drew, Peterson had been among the few Democrats not supporting impeachment ahead of Thursday’s vote.

“This impeachment process continues to be hopelessly partisan. I have been hearing from my constituents on both sides of this matter for months, and the escalation of calls this past week just shows me how divided our country really is right now,” he said in a statement on Thursday.

“I have some serious concerns with the way the closed-door depositions were run, and am skeptical that we will have a process that is open, transparent and fair,” his statement continued. “Without support from Senate Republicans, going down this path is a mistake. Today’s vote is both unnecessary, and widely misrepresented in the media and by Republicans… I will not make a decision on impeachment until all the facts have been presented.”

Republicans used the two Democratic holdouts as an opportunity to further lambast the impeachment process on Thursday. House Minority Leader Kevin McCarthy decried what he called a partisan effort and accused Democrats of trying to influence next year’s election.

“Today the country just witnessed the only bipartisan vote on that floor was against [continuing impeachment],” McCarthy said soon after the vote.

Other Republicans emphasized that Van Drew and Peterson’s reluctance underscored the GOP’s complaints.

“It starts to show that the process is flawed, and hopefully [they’ll] be the first two of many to embrace the idea that the whole process has been flawed,” Republican Rep. Mark Meadows, a close Trump ally, told TIME.

Democratic leaders, for their part, pushed back on the Republicans’ criticisms, reiterating that they believe the President’s conduct has forced them to undertake impeachment proceedings and that they want to create a transparent process.

“The Founding Fathers understood that a leader might take hold of the Oval Office who would sacrifice the national security, who would fail to defend the Constitution and who would place his personal or political interests above the country. They understood that might happen and they provided a mechanism to deal with it, and that mechanism is called impeachment,” Rep. Adam Schiff, the chair of the House Intelligence Committee, said on Thursday.

“We take no joy going down this road,” he added, “but neither do we shrink from it.”

When House Judiciary Chairman Jerry Nadler was asked about the near-party line vote, he focused his answer on the blanket Republican opposition. “I interpret that the Republicans are ignoring evidence [and] that they don’t want to see a proper investigation. Period,” he said at the Democrats’ news conference, before moving on to the next question.

House Speaker Nancy Pelosi also said during her Thursday press conference that she wants Republicans to join Democrats in investigating the President’s actions.

“This is about patriotism,” she said. “I would hope that rather than protect the President personally our colleagues would choose to honor our oath of office.” 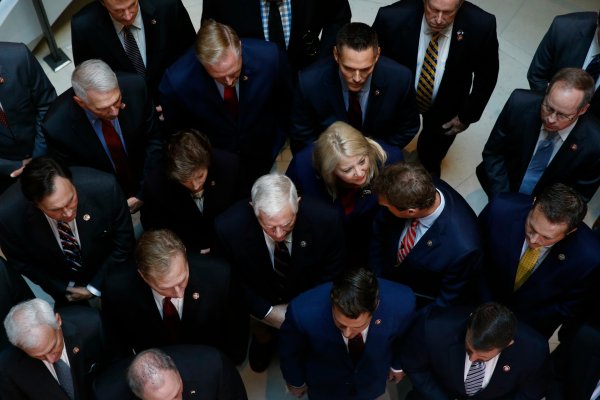 Republicans' Defense of Trump Reveals Their Problem
Next Up: Editor's Pick