On June 22, a viral video did the rounds on social media in India. A young Muslim man tied up, bleeding profusely all over his body, hands folded, was being lynched by a mob that forced him to chant of ‘Jai Shri Ram’ and ‘Jai Hanuman.’ (Glory to Lord Ram and Lord Hanuman.)

The man, later identified as 24-year-old Tabrez Ansari, was beaten for hours until he died at the hands of a Hindu mob in the eastern state of Jharkhand. The death of Ansari, who married less than two months ago and is seen crying and begging for mercy in the video, has sparked protests in cities across India. His family says they were threatened by the police with a similar fate when they begged to get him treated while he was in custody, according to a report in The Wire. Police have arrested at least 11 people over the attack.

Ansari became the first victim of hate crime in the second term of Prime Minister Narendra Modi’s government. He is survived by a young wife who wants to know who in the country she can now turn to for justice. “My husband was my only support. Who will I live for now? I want justice,” she told the TV channel NDTV.

Just two days after the attack on Ansari, a 26-year-old Muslim teacher who taught in a religious seminary was thrown out of a train in the eastern state of West Bengal. Hafeez Mohammed Haldar was traveling when a mob chanted ‘Jai Shri Ram’ ( Glory to Lord Ram) and pushed him out of the train. Hafeez managed to escape death with minor injuries.

In the same week, on June 27, a Muslim cab driver, 25-year-old Faizal Usman Khan was beaten up by a group of men at night, barely minutes away from Mumbai, India’s celebrated cosmopolitan city. When Faizal begged for mercy, the men asked him to chant Jai Shri Ram, now a rallying cry for Hindu nationalists in the country.

The U.S. Commission for International Human Rights has condemned the lynching of Ansari, observing the recognizable pattern of hate crimes against minorities that marks India’s dangerous slide into a majoritarianism long dreaded by those who have observed Modi’s past on human rights. The USCIRF chairman Tony Perkins called for the Indian government to take action to prevent further violence. “We condemn in the strongest terms this brutal murder, in which the perpetrators reportedly forced Ansari to say Hindu chants as they beat him for hours.”

Soon after Modi was re-elected as the Prime Minister of India on May 23, he gave a conciliatory speech trying to reassure Muslims. But in the five years of Modi’s first term in power, hate crime against Muslims soared; data shows that some 90% of religious hate crimes in the last decade have occurred since Modi came to power.

Indian Muslims hold a banner as they protest against the mob lynching of Tabrez Ansari in the Jharkhand state, in Ahmedabad on June 26, 2019.
Sam Panthaky—AFP/Getty Images

On May 26, in his acceptance speech addressing the members of the new Indian Parliament, Prime Minister Modi vowed to protect the interest of India’s minorities. He made a departure from his consistent dog whistle and told his legislators: “Due to vote bank politics, Indian minorities were crushed, boxed into a corner, subjected to imaginary fears, and exploited during the elections. Like the poor, they remained covered with a cloud of deception. It would have been better if their health, their education had been taken care of. In 2019, I expect you to punch a hole in that deception. We have to earn their trust.”

Indian liberals have witnessed Modi’s deceptive politics of the past: his silence through the anti-Muslim riots of 2002 under his leadership that killed a thousand Muslims, the extra judicial murders of Muslims under his regime, the hate crimes against minorities and lower-caste citizens in the last five years of his rule. Yet they asked Muslims to shun the boring victimhood narrative and take Modi at his word.

What does that word mean? After Ansari’s killing, Modi said he was “pained” to hear about it and called for “the strictest possible punishment.” But a week before the spate of hate crimes against minorities on the streets of India, Indian legislators in the presence of Prime Minister Narendra Modi chanted Jai Shri Ram and Vande Mataram as each Muslim Member of Parliament took the sacrosanct oath to serve the people of the country.

When 50-year-old Asaduddin Owaisi, a longstanding member of parliament, wore his skull cap and walked towards the speaker to swear in the name of the Indian constitution, he was heckled by members of Modi’s BJP. They chanted Jai Shri Ram to remind Owaisi of his faith — heckling that mirrors the violence on the streets.

As India suffers this downward slide of its pluralistic values, a brave Netflix series called Leila hit Indian audiences in the second week of June. The series, adapted from writer Prayaag Akbar’s novel by the same name, is set in a dystopian world where Hindu nationalists take over the Indian democracy, where Hindu women are sent to secret internment camps to purify themselves of impure Muslim alliances. In the show, the Aryavart kingdom (Hindu supremacists) demolishes the Taj Mahal to rid India of its Muslim presence as its leader rides to absolute power on totalitarian ideals. While critics were quick to call it augmented reality that ran parallel to Modi’s India, BJP members asked supporters to unsubscribe from a Hindu-bashing Netflix that spread phobia about the community.

But Leila runs a parallel narrative to the one being relayed in the Indian Parliament led by Narendra Modi. His first time Member of Parliament, Pratap Sarangi, stoked another dangerous narrative in the floor of the house, saying those who did not chant ‘Vande Mataram’ (Glory to the motherland) did not belong in India. (Sarangi has a chequered past, accused of ties to the murder of an Australian Christian missionary Graham Staines and his two children in 1999.) His diatribe was targeted at Muslim members in the Indian parliament who swore allegiance to the Indian constitution but refused to recite the chant, which has recently been appropriated by the Hindu right wing.

If the first term of Narendra Modi’s rule in India was criticized for dogwhistle politics, his second term sets the ground for fear and insecurity. The hate crimes might be committed by seemingly-ordinary men on the streets of India but the impunity of their actions is being given a new lease of life from within the aisles of the Indian Parliament.

Modi’s acolytes have often sold him as an inclusive leader, a unifier in the international arena but fail to explain the Prime Minister’s studied silence against hate in the country, often manufactured in his own backyard. Leila may be a dystopian vision but it is also a cautionary tale, the story of a once-inclusive India that becomes immersed in hate to fulfil the opportunistic ambitions of a leader who raises Hindu nationalistic slogans. And in Modi’s India, where chanting Jai Shri Ram on the streets to invoke hate crimes against minorities, it’s hard not to see how that dystopian vision could become reality. 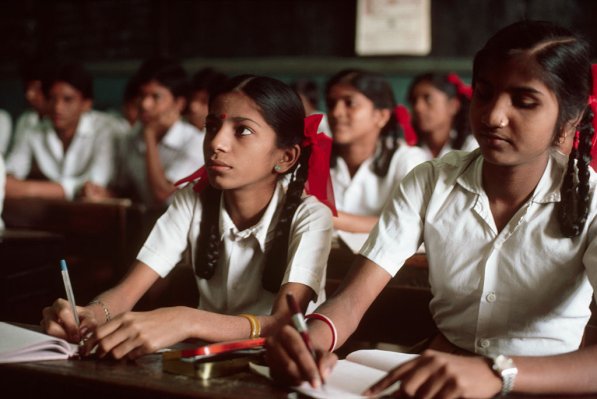 School Has Been a Right for Girls in India Since 2009. So Why Aren’t They Going?
Next Up: Editor's Pick