Taylor Swift has announced she will re-record her old songs in an effort to regain control of her back catalog.

“That’s true and it’s something that I’m very excited about doing,” Swift said Thursday when asked about her plans to rerecord some of her music on ABC’s Good Morning America. “My contract says that starting November 2020—so next year—I can record albums one through five all over again.”

Swift appeared on GMA ahead of the release on Friday of her new album, Lover.

“One thing that’s really special to me about this album is that it is the first one that I will own, of my work,” she said to raucous cheers.

Swift’s struggle over owning her music turned into a public feud with the music manager Scooter Braun in late June, when the singer’s back catalog was included in the sale of the record Label, Big Machine Label Group, to Braun’s company, Ithaca Holdings for $300 million. The catalog has Swift’s masters, which are the recordings of a song from which later copies are made, from her first six albums.

In a Tumblr post following the sale, Swift, who left Big Machine for Universal Music Group’s Republic Records, wrote that she had “pleaded for a chance to own my own work” for years. Big Machine, she said, offered her the chance to “‘earn’ one album back at a time, one for every new one I turned in.” Scott Borchetta, the original owner of Big Machine, has said he previously offered Swift a deal that would include her owning her music.

Now, it appears Swift will gain back control of the catalog by heading back to the recording studio, though it is unclear what the process of rerecording old music looks like. “I’m very excited about it because I think that artists deserve to own their work,” she said. 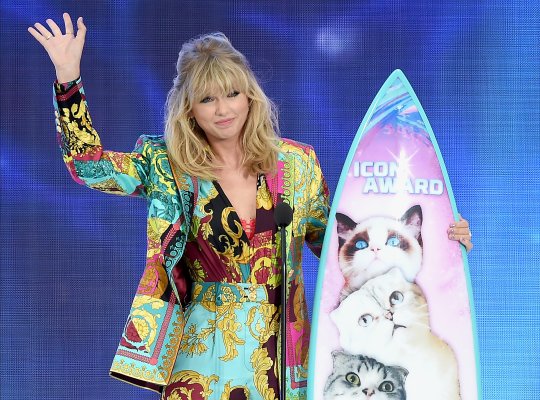 Taylor Swift’s Dad Delivered Pizzas to Fans Who Spent the Night Waiting For Her Performance
Next Up: Editor's Pick