Supporters of gun control and firearm safety measures hold a protest rally outside the US Supreme Court as the Court hears oral arguments in State Rifle and Pistol v. City of New York, NY, in Washington, DC, on December 2, 2019.
Saul Loeb — AFP/Getty Images
By Melissa Chan

Advocates on both sides of the U.S. gun debate were watching the nation’s highest court closely on Monday as the justices weighed a unique and high-stakes gun case that experts say has the potential to expand gun rights and roll back hundreds of gun-safety laws across the country.

For the first time in nearly a decade, the U.S. Supreme Court heard oral arguments in a major Second Amendment case, which initially called into question the constitutionality of a New York City law against transporting handguns.

When the Supreme Court agreed in January to take on the case, it was poised to weigh whether it was constitutional for New York City to restrict gun owners from transporting their licensed, locked and unloaded handguns to second homes or shooting ranges outside of the city. The New York State Rifle & Pistol Association (NYSRPA), a gun rights group, had challenged the law, which was the only one of its kind in the country.

New York legislators complicated the case in July when they amended the state’s law to lift the firearms travel restrictions in question — a move gun rights groups say was intended to get the Supreme Court to drop the case and prevent a potential sweeping ruling in favor of gun owners. “New York City is desperate for this case not to go before the court because they are scared to death that the court will rule in our favor,” NYSRPA President Tom King said at the time.

The nine Supreme Court justices now have to determine if the case, which is backed by the National Rifle Association, is moot since the laws have been changed, or if they will continue hearing it.

The latter carries significant consequences, experts say, which could hinder the ability of lawmakers around the country to restrict firearms. If the justices broaden the interpretation of the Second Amendment and adopt stricter tests for courts to apply in Second Amendment cases, it could create an environment where gun laws are not able to withstand legal challenges, according to Adam Winkler, a UCLA constitutional law professor and author of Gunfight: The Battle Over the Right to Bear Arms in America.

“Such a ruling could result in many more gun control laws being struck down,” Winkler says. It could also mean the end of restrictive concealed carry policies in cities like New York, Los Angeles and Boston, he adds.

In New York, a ruling benefiting gun owners could also have the potential to allow them to take their firearms outside of the home to any place where it’s legal, instead of just a second home or shooting range, says Stephen Halbrook, an attorney who has represented the NRA on other issues in federal court. “What’s riding on it — why the city is trying so hard to get out of it — is that this case would indicate that there’s a Second Amendment right to do that,” says Halbrook, who attended Monday’s Supreme Court arguments.

On Monday morning, some 400 gun-control advocates rallied outside the courthouse to urge the justices to drop the case. “Everyone agrees a lot is at stake,” says Shannon Watts, who founded the gun control advocacy group Moms Demand Action and was at the demonstration. “A sweeping and unnecessary ruling by the Supreme Court could put every gun safety law at risk,” she says.

While it’s hard to predict how the Court will proceed, some experts say the justices are likely dismiss the case. During Monday’s arguments, Chief Justice John G. Roberts Jr.’s questions seemed to signal he was leaning toward a dismissal, according to the New York Times. If that happens, the firearms industry would suffer its second blow since last month when the Court said it would not block the families of victims of the Sandy Hook shooting from suing the gun maker Remington.

But any victory for gun-control advocates may be short-lived, Winkler says, as the conservative-majority Supreme Court is likely to pick up another Second Amendment case. Winkler says the fact that the Supreme Court took on this case after years of turning away numerous Second Amendment-related appeals suggests the justices—particularly the newest Trump-nominated Brett Kavanaugh and Neil Gorsuch—are interested in expanding the scope of the Second Amendment. Gun control activists “can breathe a sigh of relief,” Winkler says, “but the battle is not over.”

The Court has not ruled on a gun-rights case since its landmark decisions in 2008 and 2010 upholding that the Second Amendment protects a private citizen’s individual right to possess a firearm that is in “common use,” and to use that firearm for “traditionally lawful purposes,” such as self-defense at home.

“President Trump has remade the Supreme Court, and the two new justices are both very strong believers in a broad Second Amendment right to bear arms,” Winkler says. “Once Justice Kavanaugh was confirmed for the court, it only took a few months before the justices accepted a case.”

“There are numerous Second Amendment cases waiting in the wings,” he adds, “and if the justices declare this one moot, they’ll take another case likely next year.”

The New York State Rifle & Pistol Association and the NRA did not immediately comment. 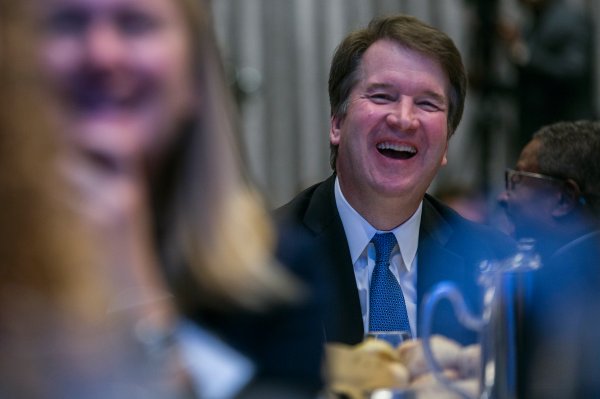 Brett Kavanaugh Opens Up About His Confirmation
Next Up: Editor's Pick