In a major blow to the firearms industry, the U.S. Supreme Court will not block the families of victims of the Sandy Hook shooting from suing the gun maker Remington.

The nation’s highest court on Tuesday denied an appeal by the Remington Arms Company to review a lower court’s ruling that allowed the families to take on the gun maker in court over how it marketed the rifle used in the 2012 school massacre.

“The families are grateful that the Supreme Court upheld precedent and denied Remington’s latest attempt to avoid accountability,” said Josh Koskoff, the attorney representing the families. “We are ready to resume discovery and proceed towards trial in order to shed light on Remington’s profit-driven strategy to expand the AR-15 market and court high-risk users at the expense of Americans’ safety.” One of the weapons Adam Lanza used at Sandy Hook was an AR-15 style Bushmaster.

The Court’s decision not to take on the Remington case is significant and suggests the court is not yet willing to weigh in on challenges to a federal law that has protected gun companies from lawsuits since it was enacted in 2005. The law, formally known as the Protection of Lawful Commerce in Arms Act, largely shields firearm and ammunition manufacturers and sellers from liability when their products are used in crimes. There are a few exceptions, such as if a defective weapon causes death or injury or if a seller or manufacturer is found to have violated a law in the marketing or sale of the product. But the law has widely deterred families from targeting gun makers in court.

In 2014, two years after a gunman killed 20 children and six faculty members at Sandy Hook Elementary School in Newtown, Conn., nine family members of victims and one survivor took on the challenge and filed a wrongful death suit against Remington over its marketing practices. Remington argued it was protected under the law, but the families’ suit said the federal law did not apply because they were accusing Remington of violating state laws in the marketing of the weapon. In March, the Connecticut Supreme Court agreed. Remington appealed to the U.S. Supreme Court, which declined to hear the case without offering any explanation. The case now heads back to the Connecticut Superior Court.

“This simply means that the case can proceed under Connecticut state law, and it doesn’t mean that the plaintiffs will prevail,” says Robert Spitzer, a gun policy expert and chairman of the political science department at the State University of New York at Cortland.

But Spitzer and other experts say Remington could be forced to provide documents that could yield damaging internal memos—similar to the way a major civil settlement in 1998 forced the tobacco industry to disclose millions of pages of internal communications that revealed deceptive marketing practices.

“Who knows what they’ll find,” Spitzer says, “but there’s certainly a fair likelihood that it could indeed be damaging politically and perhaps even to the legal case they’re trying to make.”

Remington did not immediately respond to a request for comment Tuesday.

Gun rights groups have slammed the lawsuit as a misuse of the legal system. In a statement to TIME, Lawrence Keane, senior vice president and general counsel for the National Shooting Sports Foundation, said the gun trade group was “disappointed” by the Supreme Court’s decision but “confident that Remington will prevail at trial.”

“Nothing in Remington’s advertising of these products connotes or encourages the illegal or negligent misuse of firearms,” Keane said. “We continue to feel sympathy toward the Sandy Hook victims, as NSSF is headquartered in Newtown, but Adam Lanza alone is responsible for his heinous actions.”

The National Rifle Association (NRA) said perpetrators of shootings who misuse firearms are the “real problem,” not gun manufacturers. “Lawsuits that deflect attention away from mental illness and criminals in order to blame inanimate objects won’t reduce violent crime or make anyone safer,” Jason Ouimet, the executive director of the NRA Institute for Legislative Action, said in a statement. 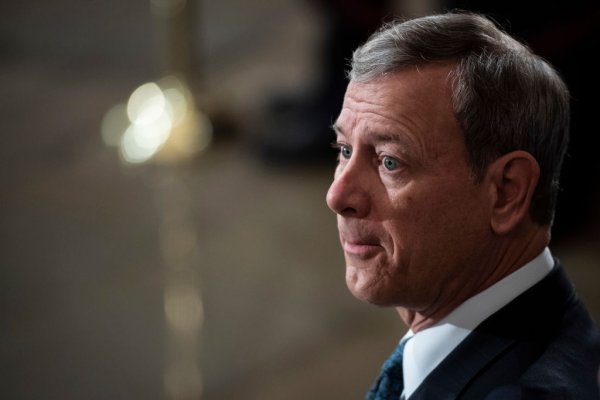 Why Impeachment Could Be a Nightmare for Chief Justice John Roberts
Next Up: Editor's Pick