Donald Trump Says He Wants a Trial. Here's What Needs to Happen in the House Impeachment Inquiry Before He Gets One

This week’s back-to-back days of testimony from key witnesses in the Democrats’ impeachment inquiry have given the probe a sense of momentum as Congress heads into its Thanksgiving break. Now Democrats have to decide what to do with it.

In one sense, the question before Nancy Pelosi and other House leaders is straightforward: Will more hearings produce evidence that ultimately strengthens the case that President Donald Trump should be removed from office, or do they already have what they need to make the case?

But the larger question facing Pelosi and her aides is a more complicated political one. If, as polls suggest, there is no evidence that will convince Republican voters, and therefore GOP lawmakers, that Trump abused the power of the presidency, what is the best course of action for Democrats as they seek to retake the White House and the Senate, and hold on to the House?

Ultimately, the House Intelligence Committee conducting the probe will draft and submit a report to the House Committee on the Judiciary. The Judiciary Committee will then decide if the evidence warrants a House vote on impeachment. If there is a successful vote to impeach Trump next month, the case could proceed to a trial in the Senate as early as January.

The committee has not publicly noticed any depositions or hearings for next week, though they could in theory continue if Democrats decide they need more to bolster their case. “I think the assessment has to be made about what did we learn, what have we gotten, what do we need to know?” says Rep. Eliot Engel, chairman of the House Committee on Foreign Affairs, one of the committees leading the inquiry.

By the time Thursday’s testimonies from Trump’s former Russia adviser Fiona Hill and State Department employee David Holmes ended, the public had heard from most of the witnesses who had privately testified before impeachment investigators. Like Hill and Holmes, most have been apolitical bureaucrats who recounted what they knew about the Trump Administration’s hold on millions of dollars in aid to Ukraine and a proposed meeting between Trump and Ukrainian President Volodyr Zelensky — and whether either was conditioned on Ukraine’s opening investigations into former Vice President Joe Biden and his son Hunter.

Several revelations emerged from the public testimonies that may prove integral to the Democrats’ case. Ambassador Taylor, the U.S. charges d’affaires in Kyiv, revealed during his opening statement that an aide — later identified as David Holmes — told him he overheard a phone call between Trump and EU Ambassador Gordon Sondland discussing whether Zelensky would commit to an investigation. Holmes was subsequently brought in for a deposition and a public testimony, during which he said he heard Sondland tell Trump that Zelensky “loves your ass” and was willing to commit to the probes. Sondland, who had already appeared before the committee and had not divulged that information, confirmed Holmes’ account during his public testimony on Wednesday.

Another key moment came from Deputy Assistant Secretary of Defense Laura Cooper, who said during her opening statement that after the transcript of her private deposition was published, her staffers told her that, just after Trump’s July 25th call with Zelensky, the Ukrainian embassy had e-mailed them twice inquiring about the aid. That new timeline undermines a key Republican talking point throughout the impeachment inquiry: For weeks, Republicans had been arguing that Ukraine was unaware the aid was being held up until a Politico article was published about it in August, rendering the idea of a ‘quid pro quo’ during the call impossible. Democrats suggested after Cooper’s testimony that if the Ukrainians already suspected there was an aid hold up in July, Zelensky may have known he had something to lose by not cooperating with Trump when they spoke.

But the committee has not heard from people in Trump’s most inner circle. White House Chief of Staff Mick Mulvaney, Energy Secretary Rick Perry and National Security Counsel lawyer John Eisenberg, all of whom were mentioned by witnesses as key players during the hearing, defied Congressional subpoenas to appear. An attorney for John Bolton, who led the National Security Council during the crucial time period at the heart of the inquiry, has said he will not come before Congress unless he is subpoenaed, but noted in a letter to General Counsel to the U.S. House of Representatives Doug Letter that he has “many relevant meetings and conversations that have not yet been discussed in the testimonies thus far.”

Democrats have been reluctant to subpoena Bolton or enforce the other ones in court, fearing the process get held up for much of next year. After Charles Kupperman, a Bolton deputy, took his subpoena to court, Democrats withdrew it. One committee aide, who requested anonymity, said his “flawed lawsuit would only result in delay.”

It doesn’t serve Democrats or Republicans for the impeachment inquiry to stretch deep into 2020 ahead of elections. Instead, Pelosi appears to be pushing for action. During her weekly press conference on Thursday, Pelosi said that she’s not interested in waiting for the courts to decide the fate of the inquiry as various subpoenas get tied up in appeals. “It’s a technique. It’s obstruction of justice, obstruction of Congress,” she said.

Other Democrat lawmakers also agree that it is time to move forward, saying they were not sure how much more key information could emerge from calling fresh witnesses after the last few weeks. “We’ve seen so much testimony at this point,” said Rep. Raja Krishnamoorthi, a member of the House Intelligence Committee. “I don’t think we should wait.”

Trump, for his part, said on Fox News on Friday that he embraced the idea of the matter moving to a trial in the Senate if the House votes to impeach him. “Frankly, I want a trial,” he said during his phone call into the Fox and Friends morning show.

At this point, it seems inevitable he will get one. And it won’t be long before voters have their say about whether they think Democrats did the right thing making that happen. 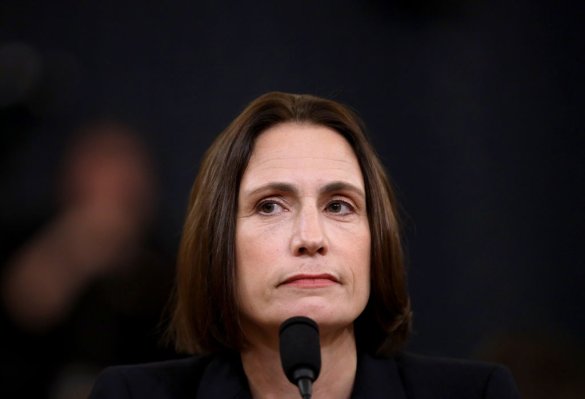 Fiona Hill Faces Off With Republicans
Next Up: Editor's Pick