'I've Never Seen Anything Like This.' These Are the Biggest Moments of Fiona Hill and David Holmes’ Impeachment Testimony

Both shed new light on allegations that Trump withheld a crucial meeting and millions of dollars in aid to Ukraine to extract a promise that the country would open investigations into alleged Ukrainian interference in 2016 elections and corruption at Burisma, the gas company that employed Joe Biden’s son Hunter as a board member.

Hill, who remained unflappable throughout her hours of testimony on Thursday, called theories that Ukraine had meddled in the U.S. 2016 elections were “fictions” and “harmful.”

When ranking minority member Rep. Devin Nunes of California continued to press the issue, asking Hill if Trump, as Commander in Chief, had the right be concerned about foreign interference in the 2016 elections and Burisma, Hill said she had never been instructed those matters were a concern of U.S. national security. “We at the National Security Council were not told, either by the President directly or through Ambassador Bolton, that we were to be focused on these issues as a matter of U.S. foreign policy toward Ukraine… In fact, I was given a directive by Ambassador Bolton very clearly to stay out of domestic politics,” she said.

Her testimony followed an explosive day of hearings in which EU Ambassador Gordon Sondland described how Trump’s personal attorney Rudy Giuliani, at the behest of Trump, sought to condition a meeting between Trump and Ukrainian President Volodymyr Zelensky on the launch of those probes and that he worked with Giuliani to accomplish that objective. “Mr. Giuliani’s requests were a quid pro quo for arranging a White House visit for President Zelensky,” Sondland said. “Mr. Giuliani was expressing the desires of the President of the United States, and we knew that these investigations were important to the President.”

During her hearing on Thursday, Hill said she had grown frustrated with Sondland for not coordinating with her office as he pursued these matters, later realizing that he was running a “domestic political errand” while she and her colleagues were tasked with trying to maintain U.S. national security interests.

Holmes, who testified behind closed doors last week, was the aide who overheard a July 26 phone call between Sondland and Trump at a Kyiv restaurant. During that conversation, Holmes told investigators, he heard Sondland tell Trump that the Ukrainian president “loves your ass” and would open the probes into Ukrainian interference in the 2016 election and Burisma he had requested.

“I’ve never seen anything like this, someone calling the President from a mobile phone at a restaurant, and then having a conversation of this level of candor, colorful language,” Holmes told investigators during his deposition. “There’s just so much about the call that was so remarkable that I remember it vividly.”

His testimony was significant for the Democrats because it tied the President directly to the call for investigations. Sondland on Wednesday conceded that he and the President routinely used “colorful language” when they spoke with each other, estimating he had spoken to Trump roughly 20 times.

Holmes also told investigators he asked Sondland if Trump cared about Ukraine, and Sondland answered negatively, claiming he only cares about “big stuff that matters to him, like this Biden investigation that Giuliani is pushing.”’

Fiona Hill, the National Security Council’s former senior director for Europe and Russia, and David Holmes, an official from the American embassy in Ukraine, are sworn in prior to testifying before the House Intelligence Committee on Capitol Hill on Nov. 21, 2019.
Win McNamee—Getty Images

Impeachment ‘not something to be rushed or taken lightly’

Texas Rep. Will Hurd, one of the moderate Republicans who is retiring, seemed to dash any hopes from Democrats that he would vote to impeach President Donald Trump. “An impeachable offense should be compelling, overwhelmingly clear and unambiguous — and it’s not something to be rushed or taken lightly,” he said. ”I have not heard evidence that the president has committed bribery or extortion.”

However, while Hurds’ acknowledgement lowered Democrats’ already slim hopes that they may get bipartisan consensus on articles of impeachment, he was arguably more critical of Trump than any of his Republican colleagues on the committee, arguing that Trump’s comments on the July 25 call were inappropriate and that some of the Administration’s actions undermined national security.

‘I Don’t Know What a Never Trumper Is’

Like the multiple witnesses who preceded her, Hill emphasized her apolitical inclinations, not only in her opening statement but also in response to questioning from lawmakers. “I take great pride in the fact that I am a nonpartisan foreign policy expert, who has served under three different Republican and Democratic presidents,” she told the committee at the beginning of her testimony. “I have no interest in advancing the outcome of your inquiry in any particular direction, except toward the truth.”

During a round of questioning, Alabama Democratic Rep. Terri Sewell asked her if she was a “never Trumper,” which is one of the taunts the President and his allies have been using to deride witnesses involved in the inquiry.

“I honestly don’t know what the definition of a never Trumper is, as I think many of my colleagues are feeling the same way.” she said. “I chose to come into the Administration. I could have easily said no.”

Hill also confirmed she and her staff have been receiving threats since her participation in the inquiry.

‘A clear Recollection’ of a phone call discussing investigations

Holmes’ opening statement largely recapped his closed door testimony, describing his dismay at Giuliani’s role in promoting false narratives about former Ukraine Ambassador Marie Yovanovitch, and slowly learning that a meeting between Trump and Zelensky was conditioned on conducting investigations.

Holmes again confirmed the contents of Sondland’s phone call with Trump, noting that, while he did not take notes he had a “clear recollection” of what happened, and immediately briefed his colleagues upon returning to the embassy. He was particularly concerned, he said, by Sondland’s admission that Trump did not care about Ukraine.

Hill’s opening statement was laser-focused on one key message: the notion that Ukraine and not Russia interfered in the 2016 election — a conspiracy theory that Trump pressed Ukraine to investigate — is a “fictional narrative that has been perpetrated and propagated by the Russian security services themselves.”

Hill, who reported directly to former National Security Advisor John Bolton, used her opening remarks to warn of potential Russian interference in the next 2020 election. “Right now, Russia’s security services and their proxies have geared up to repeat their interference in the 2020 election. We are running out of time to stop them,” she said. “In the course of this investigation, I would ask that you please not promote politically driven falsehoods that so clearly advance Russian interests.”

Her testimony attracted the scorn of Rep. Devin Nunes before she even began sharing it. “It is entirely possible for two nations to engage in election meddling at the same time,” he said. 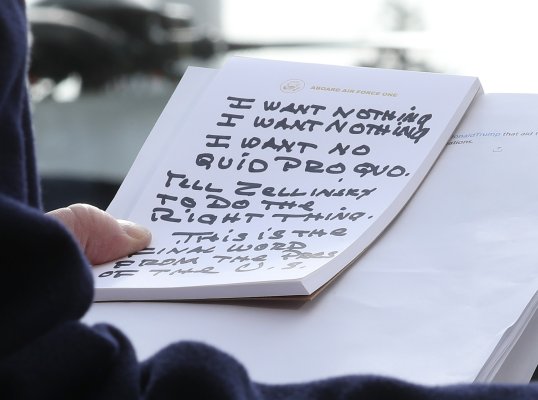 Sondland May Have Sealed Trump's Impeachment
Next Up: Editor's Pick