The former U.S. ambassador to Ukraine who was abruptly removed by President Donald Trump earlier this year took center stage on Friday to testify in the second public hearing in his impeachment inquiry.

Ambassador Marie “Masha” Yovanovitch, 61, was ousted in May after what her former colleagues describe as a “smear campaign” by Trump’s allies, led by his personal lawyer Rudy Giuliani. During the Friday hearing, Yovanovitch called her removal “extremely irregular.” When she returned to Washington, the Deputy Secretary of State, John Sullivan, told her ‘the President has lost confidence in you’ as grounds for her removal. “But no real reason was offered as to why I had to leave and why it was being done in such a manner,” she testified.

In a July 25th call with his Ukrainian counterpart, Volodymyr Zelensky, which sparked the initial whistleblower complaint, Trump described her as “bad news” and someone who was “going through some stuff.”

Regarding being mentioned in the call, Yovanovitch told the House Intelligence Committee, “It sounded like a threat.”

Binders full of notes, testimonies, talking points and more are distributed for Democratic members of Congress at the House Intelligence Committee hearing on the impeachment inquiry, in Washington, D.C., on Nov. 15, 2019.
Gabriella Demczuk for TIME

Other diplomats have testified that Yovanovitch, who was known as an outspoken critic of corruption in Ukraine, was unfairly removed after a sustained lobbying campaign from Giuliani and others. Ahead of Friday’s hearing, Democratic investigators said Yovanovitch’s ouster is a crucial piece of the timeline. “She was the first casualty of the President’s efforts that would ultimately lead to the pressure campaign in support of the 2020 election,” one Democratic aide told reporters the evening before her testimony.

Read more: In First Public Impeachment Hearing, Diplomats Say Trump’s Probes Were About Biden Not Corruption | How Republican Defenses of Trump on Impeachment Have Shifted Over Time

An apolitical career diplomat with over three decades of experience, Democrats hoped Yovanovitch’s testimony would help bolster their narrative that the President undercut his own State Department to further his political agenda. The overarching impeachment inquiry focuses on whether Trump used military aid to Ukraine as leverage to pressure the country to open probes into his political rivals.

Here are the biggest moments from Yovanovitch’s testimony at the impeachment hearing:

A round of applause for Yovanovitch

After the more than five-hour hearing, the public who had been watching in the room rose and applauded for Yovanovitch — an unusual occurrence.

“She just touched me, how sincere she was, and I really believe she wanted to do what she said for our country,” said Kathy Benjamin, a former educator from Long Island who identifies as a Democrat and had come to Washington to watch this week’s hearings.

“I’ve never seen that,” said California Rep. Eric Swalwell. “I hope they were applauding the Ambassador.”

As Yovanovitch was testifying, President Trump lodged a new attack on her. “Everywhere Marie Yovanovitch went turned bad. She started off in Somalia, how did that go?” Trump tweeted. Asked by Chairman Adam Schiff about the tweet, she responded: “I don’t think I have such powers.”

She subsequently said that such tweets were “intimidating” and could have potential ramifications for other witnesses seeking to come forward.

Trump’s most ardent supporters in Congress were quick to dismiss his tweet regarding Yovanovitch, which a Democratic aide printed out and handed to staffers. “The President has a right to defend himself,” said Rep. Lee Zeldin, arguing that Schiff mischaracterized the tweet because he did not read it in full. “I don’t think it moved the needle very much,” Rep. Mark Meadows added.

Yovanovitch told the Democratic head of investigations, attorney Daniel Goldman, that she first read the memorandum of Trump’s July 25 call with Zelensky when it was released to the public last September, and described being “shocked and devastated.”

“A person who saw me actually reading the transcript said the color drained from my face,” Yovanovitch recalled. She said her concerns were not just for herself, but the broader idea of a President attacking a foreign service officer in a call with another world leader. Trump’s comments to Zelensky that she was “going through some stuff” were also deeply concerning for her, Yovanovitch said.

Yovanovitch emphasized that she was never questioning Trump’s right to fire her, but didn’t understand why there was a need to “smear” her reputation.

Democrats have tried to shift their argument that President Trump engaged in bribery — an impeachable offense explicitly named in the Constitution —by leveraging foreign aid to Ukraine.“The devastating testimony corroborated evidence of bribery uncovered in the inquiry, and that the President abused power and violated his oath by threatening to withhold military aid and a White House meeting in exchange for an investigation into his political rival” House Speaker Nancy Pelosi told reporters Thursday.

But on Friday, Yovanovitch told Utah Rep. Chris Stewart she had no information about the President accepting any bribes. While Yovanovitch said in her opening statement that her tenure ended before Trump allegedly pushed Zelensky to investigate the Bidens, her denial undoubtedly gives Republicans another talking point.

‘What we do is inherently non-partisan’

Like George Kent and William Taylor, whose testimony preceded hers, Yovanovitch was asked if she was a “never Trumper,” a charge some of the President’s allies have used to describe the witnesses who came forward. “No,” she answered firmly.

She subsequently went on to explain why it is so important for foreign service officers to remain non-partisanship. “Obviously the competition of ideas in a democracy is hugely important,” she said. “[But]at the end of the day when we are dealing with other countries it needs to be about what is right for the United States.”

“What we do is inherently non-partisan,” she later said in response to a question from Rep. André Carson, a Democrat from Indiana. “It has to be about the greater interests of our security.”

Both Republicans and Democrats made sure to thank Yovanovitch for her service at the beginning of their questioning.

Marie Yovanovitch, the former ambassador to Ukraine, is sworn in during a House Intelligence Committee hearing on the impeachment inquiry in Washington, D.C., on Nov. 15, 2019.
Gabriella Demczuk for TIME

Unlike Taylor, who serves the U.S. charges d’affaires in Kiev who testified before House Intelligence on Wednesday, Yovanovitch’s 13-page opening statement contained no new information that would further Democrats’ probe. But she described in painstaking detail her experience as a diplomat overseas — including being caught in a crossfire — that illuminated her service to the country, and used it as groundwork to explain why her removal, fueled by allegations she repeatedly derided as false, was so alarming for foreign policy as a whole. “Our Ukraine policy has been thrown into disarray, and shady interests the world over have learned how little it takes to remove an American Ambassador who does not give them what they want.”

“Corruption is also a security issue, because corrupt officials are vulnerable to Moscow. In short, it is in America’s national security interest to help Ukraine transform into a country where the rule of law governs and corruption is held in check,” Yovanovitch said.

Yovanovitch’s testimony comes just two days after an inspector general report detailing the increased politicization of the State Department. At the conclusion of her opening statement, she made sure to highlight the sacrifices foreign service officers have made to the country, and their apolitical stance. “We are professionals, public servants who by vocation and training pursue the policies of the President regardless of who holds that office or what party they affiliate with,” she said.

Moments before Yovanovitch’s hearing began, the White House released a rough transcript of a phone call Trump had with Zelensky on April 21, just after Zelensky was elected President of Ukraine.

The largely congratulatory call does not mention the Bidens or the 2016 election like the infamous July one did. “I have no doubt you will be a fantastic president,” Trump said. Trump did tell Zelensky he looked forward to working with him going forward: “We’ll have a lot of things to talk about, but we’re with you all the way.” Three days after this April call, Yovanovitch was told by a State Department official that she needed to be on the next plane out of Kiev.

Lt. Alexander Vindman, the Director for European Affairs for the United States National Security Council, previously testified the April call was a “positive” one. “Everybody was happy, high-fiving because we were moving in the right direction for Ukraine.” Vindman had also noted that “the atmospherics and the tone were not the same” as the July 25 call.

After Republican ranking member Rep. Devin Nunes read the April 21 call into the hearing record, Chairman Adam Schiff said he was pleased with the transparency from the White House but it did not add much to the narrative. After the congratulatory call, Schiff pointed out, Trump told Vice President Mike Pence not to attend Zelensky’s inauguration. 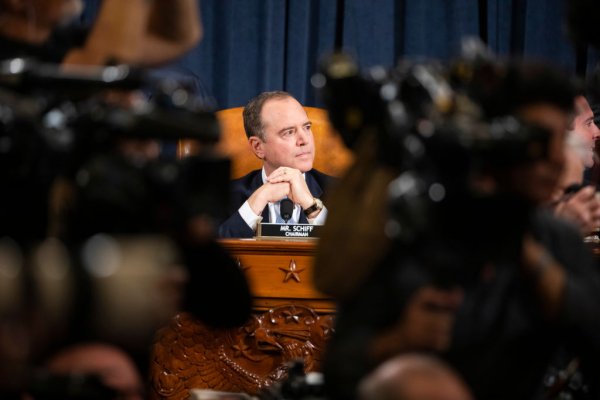