Rapper A$AP Rocky Came Up at Least 5 Times During a Key Impeachment Hearing. Here's Why

The hours-long public testimony of U.S. Ambassador to the European Union Gordon Sondland Wednesday included details that could be key to the outcome of President Donald Trump’s impeachment inquiry. While Trump was the central figure in the proceedings, there was a surprising cameo as well: A$AP Rocky, the New York-born rapper who found himself at the center of an international incident in Sweden this past summer.

A$AP Rocky came up at least five times during Sondland’s testimony to the House Intelligence Committee—including in reference to a July 26 phone call Sondland had with Trump, a major point of interest in the testimony.

Sondland testified that he was sitting in a Kyiv restaurant for what he said was a five-minute phone call with the President. He said he didn’t remember specific details of the call, but that he “had no reason to doubt that this conversation included the subject of investigations” into Biden and the 2016 election. He also noted that he would have been “more surprised if President Trump had not mentioned [Ukraine] investigations.”

The real reason for the call, however, was to strategize about how to handle A$AP Rocky’s arrest in Sweden, Sondland testified.

Trump had pressured Sweden’s Prime Minister to release A$AP Rocky on bail (despite the fact that Sweden has no bail system) after the rapper was detained and charged with assault in July after a street brawl in Stockholm. The rapper pleaded not guilty, claiming self-defense. He was convicted of assault but was not required to serve additional jail time. Trump later celebrated the rapper’s release in August, saying “get home ASAP A$AP!”

Sondland reiterated that A$AP Rocky was the “primary purpose of the phone call” when Democratic counsel Daniel Goldman inquired about his chat with Trump.

“One of the things you now remember is the discussion that you had with President Trump on July 26 in that restaurant in Kyiv, right?” Goldman asked.

“What triggered my memory was someone’s reference to A$AP Rocky, which was I believe the primary purpose of the phone call,” Sondland responded.

This was not the first time the rapper came up in impeachment hearings. State Department official David Holmes had previously testified that Sondland had advised Trump that he should “let [A$AP Rocky] get sentenced, play the racism card, give him a ticker-tape when he comes home.”

On Wednesday, Sondland talked about his memory being “refreshed” by Holmes mentioning A$AP Rocky in his testimony. When Republican counsel Steve Castor asked about the impact of Holmes’ testimony on Sondland’s recollection, the ambassador responded, “The whole thing sort of came back to me after he mentioned A$AP Rocky.”

According to Holmes, Sondland had told Trump that Swedish authorities “should have released him on your word” but that he could still “tell the Kardashians [he] tried.” 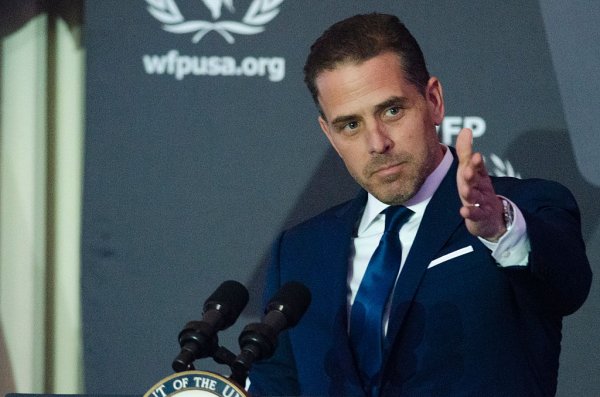 Ukraine Wants to Probe the Company That Paid Hunter Biden. But It's 'Too Sensitive'
Next Up: Editor's Pick