Rapper A$AP Rocky was spotted landing at Los Angeles International Airport late Friday local time, the Associated Press reports, after more than a month in a Swedish jail following the end of his assault trial.

The New York-born rapper was allowed to leave the country for the first time since his July 3 arrest while he awaits the decision if the judge in the case. A verdict is scheduled to come on Aug. 14, Karin Rosander, spokeswoman for Swedish Prosecution Authority tells TIME.

A photo taken after the trial shows A$AP Rocky smiling as he gets into a vehicle. He thanked his fans and supporters in an Instagram statement posted Friday, saying “I can’t begin to describe how grateful I am for all of you.”

The scuffle escalated into an international incident over the last month, with President Donald Trump telling Sweden’s Prime Minister Stefan Löfven that he was “very disappointed” he refused his personal request to secure bail and help free the musician. However, Sweden does not have a bail system and the country’s constitution forbids the prime minister from trying to intervene in a legal case.

After the court announced the rapper’s release, Trump tweeted, “It was a Rocky Week, get home ASAP A$AP!”

Prosecutors have asked that the Grammy-nominated artist receive a sentence of at least six months in prison. The maximum sentence for assault in Sweden is two years.

Anne Ramberg, the secretary-general of the Swedish Bar Association, tells TIME she would be “shocked” if A$AP Rocky would still have to serve time in a Swedish prison. “If the court released him today that means either he will not be convicted or he will be convicted but he will not be sent to prison for more time than he has already been detained,” Ramberg says.

In the unlikely event that the rapper would face a longer prison sentence, she says, extradition laws between Sweden and the U.S. do exist.

A$AP Rocky, 30, was first taken into custody on July 3 after a fight broke out in Stockholm. Prosecutors say the alleged victim, Mustafa Jafari, was beaten and hit with a bottle.

Jafari, 19, was left with cuts, bruises and a blood-stained shirt, court records allege. He is now asking for $14,700 in damages for his physical and psychological injuries, lost income and damage to his appearance.

Video footage circulating online shortly after the fight showed A$AP Rocky and what appeared to be members of his entourage, including his security team, hitting Jafari, who was born in Afghanistan. A$AP Rocky took the stand Thursday to testify that he acted in self-defense after pleading not guilty to the assault charges.

The rapper said he did everything possible to avoid conflict with the two men whom he said followed his entourage, the Associated Press reported. He further alleged that the men appeared to be under the influence of drugs and said Jafari provoked one of his bodyguards, who then “started pushing him away, begging him to leave, go from there.”

Jafari said through his lawyer, Magnus Stromberg, that he was angry because the security guard had broken his headphones after an argument that occurred earlier.

A$AP Rocky had posted an Instagram video that appears to show Jafari and a friend following him even after he warned them to leave. “We don’t want to fight you all, we’re not trying to go to jail.”

However, Stromberg tells TIME that video had edited out a scene showing the rapper’s bodyguard throwing Jafari to the ground.

American interest in the trial was enough that Trump’s special envoy for hostage affairs, Robert C. O’Brien, was even in the Swedish courtroom earlier this week and told the New York Times on Tuesday that, “The President asked me to come here and support these American citizens.” The State Department previously said it would be following the case closely.

The Swedish government confirmed O’Brien’s presence in Stockholm, and said that “this case is not in any way a ‘hostage affair,’ “ the Associated Press reported.

The court’s ruling may come down to a glass bottle, specifically: whether the rapper or the two other suspects, who have also been charged with assault, used the bottle to hurt Jafari. A$AP Rocky has denied doing so.

It’s important for the prosecutor to prove whether a glass bottle was used because that could prove “you armed yourself against a person who was not armed,” Dennis Martinsson, a senior law lecturer at Stockholm University, tells TIME. “Then (the prosecutor) would say it’s clearly not a case of self-defense.”

Showing that the bottle was used as a weapon could also result in a longer prison sentence, Martinsson says.

A young woman who says she and a friend witnessed the fight occur outside of a fast-food restaurant they were eating in, testified anonymously as a witness via video link on Friday, and said she did not actually see A$AP Rocky hitting a man with a bottle—changing her story from what she said in initial police reports, the AP reported.

She testified that she could not say with certainty whether the rapper’s entourage threw the bottle to the ground or hit Jafari with it but she did hear a bottle being crushed, according to the AP. She also saw the rapper and his partners beating and kicking Jafari.

Stromberg, Jafari’s lawyer, tells TIME that a “brutal assault” started when his client was hit from behind with a bottle.

“They cannot explain why my client has lots of cuts in his underarms, on his head and left hand,” Stromberg says, adding that police found glass on the side of the street where he says the rapper grabbed and threw Jafari but not where he landed — disputing the idea that Jafari may have simply fallen on broken glass.

Video footage also shows A$AP Rocky holding a bottle that is sticking out from his sleeves, Stromberg says. And a text from A$AP Rocky’s assistant uncovered during the investigation states: “Harlem came out and smashed a bottle on a person.” Prosecutors tried during the trial to figure out whether “Harlem” was a nickname for the rapper, who has denied that he hit anyone with a bottle.

But the defense has argued these texts may not have been usable evidence, according to independent journalist Maddy Savage.

Slobodan Jovicic, A$AP Rocky’s lawyer, denied the accusation that a bottle was used in the attack on Jafari in a press conference on Tuesday. “I’m pretty sure that when we are done, we’re going to show that no bottle has been used or not in the way that the prosecutor is claiming anyway,” Jovicic told reporters.

The bottle is not the only evidence the court is considering. How the court interprets the surveillance footage, which showed the argument escalate outside a fast-food restaurant, is even more important, according to Martinsson.

Both lawyers say the media attention and political spotlight has not been helpful.

“The enormous attention makes it even more stressful,” Stromberg says. “The assault has haunted (Jafari) and he is very, very scared.”

Asked whether political influence could affect the verdict, Jovicic told reporters on Tuesday: “Absolutely not.” Jovicic said the verdict would depend on the evidence and arguments put forth by the prosecution and defense. 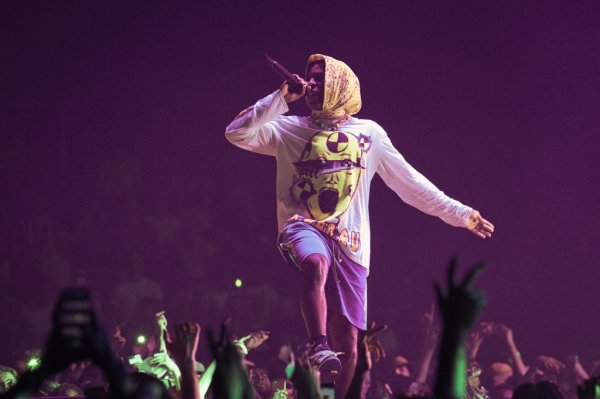 Why the Swedish PM Can't Release A$AP Rocky on Bail
Next Up: Editor's Pick