Some American Airlines Group Inc. flight attendants remain fearful of flying the Boeing Co. 737 Max, even as the planemaker nears regulatory approval for a software update to return the grounded jet to service.

Attendants want to be fully versed on what happened in two fatal crashes of the Max and why the plane is safe to fly now, the Association of Professional Flight Attendants said Thursday. The union will consider information from Boeing, U.S. regulators, American Airlines, the carrier’s pilots and others before making a final decision.

“I hear from some flight attendants every day and they are begging me to not make them go back up in that airplane,” APFA President Lori Bassani told reporters. “We want to know without a doubt that it’s safe to fly.”

Read more: Here’s How to See Whether You’re Flying on a Boeing 737 MAX 8 on Your Next Flight

Regaining the trust of airline employees is crucial for Boeing as it seeks to end the Max’s worldwide grounding, which just hit the eight-month mark. The U.S. Federal Aviation Administration is on track to certify redesigned flight-control software by mid-December, Boeing said earlier this week. That could enable the manufacturer to begin delivering new Max jets to airlines after months of stashing aircraft across the Pacific Northwest and Texas.

The APFA is one of several groups within American planning for the return of the Max. To demonstrate the safety of the aircraft to future passengers, American plans to make “exhibition flights” with executives, workers and reporters before the plane resumes commercial service.

American’s employees must be comfortable with the Max before it will fly again, President Robert Isom said.

“After the FAA has given their sign of approval, after our pilots have said ‘Yes we’re ready to go,’ we intend to fly that aircraft so that our team is comfortable,” he said at the Wings Club in New York. “So our pilots, our flight attendants, our partners, media — you name it — all of us as executives — we intend to fly that aircraft before it goes into commercial service.”

Earlier this year, Bassani went on a Boeing flight simulator that mimicked circumstances that led to the crashes of a Lion Air plane in October 2018 and an Ethiopian Airlines jet in March. She will seek to do so again at a meeting with Boeing in early December to gather information for the 28,000 flight attendants she represents at Fort Worth, Texas-based American.

“We want to be face to face,” she said of Boeing and its chief executive officer, Dennis Muilenburg. “We want to look in their eyes and ask the hard questions. We have a long ways to go.”

The union for flight attendants at United Airlines Holdings Inc. has said it wants a global consensus on the Max’s safety — not just approval from the FAA — before its members will work again on the Max.

The APFA expects that FAA approval likely will be followed closely by regulators in Europe, Canada and other regions, said Jeffrey Ewing, chairman of the union’s national safety and security committee. 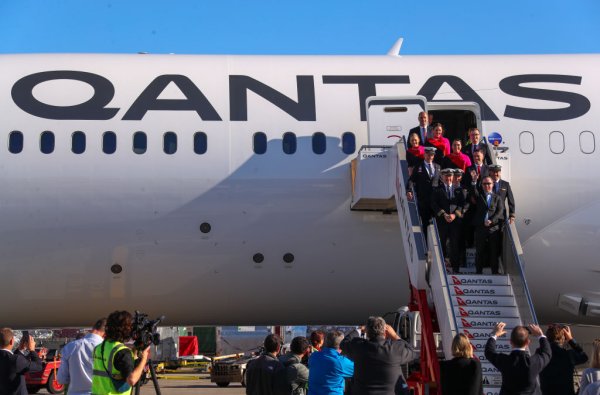 Here's What It Was Like to Take the World's Longest Non-Stop Flight
Next Up: Editor's Pick