After a plane crash, the Federal Aviation Administration typically steps in, reassuring the public, airline passengers and the stock market. But former aviation officials and other experts are questioning whether the agency’s handling of two deadly Boeing 737 MAX 8 accidents has been strong enough.

In the wake of two similar crashes in less than five months that killed all 246 people aboard flights in Ethiopia and Indonesia, authorities in at least 13 countries grounded the plane and banned it from entering their airspace.

But the FAA said it saw no reason to do so, instead stood by a prior mandate on updating the plane’s software “no later than April.”

Jim Hall, who headed the National Transportation Safety Board from 1994 to 2001, said the agency would have responded differently if the crashes had taken place near U.S. cities like Los Angeles or New York.

“There’s no question in my mind that if those two events had happened in our country, the aircraft would be grounded and there would be a far more intense look at this,” Hall said.

Ethiopian Airlines Flight 303 bound for Nairobi crashed six minutes after take-off from Addis Ababa on Sunday, killing all 157 people on board. Another Boeing 737 MAX 8, owned by Indonesian carrier Lion Air, went down in October, killing 189. In both cases, the pilot had reported difficulties and requested permission to turn back.

At this point, the cause of the crash is unknown. While the plane’s black boxes have been recovered, it may be months before investigators determine how the crashes happened and whether they are related. The FAA maintains that it sees no reason to make a sweeping decision to ground the jets, a directive that the agency rarely gives.

The public backlash, however, was swift. More than two dozen airlines around the world opted to ground their MAX 8 planes while investigators sifted through the wreckage for a root-cause. The inquiry into what occurred on the ill-fated flights is likely to last for months before questions are definitively answered.

“They have a responsibility within the U.S. to ensure safety,” he said. “I don’t think they want to stand alone while other nations decide to ground the airplanes.”

Even aviation experts who go on TV news — who typically take a wait-and-see approach to avoid spreading panic — broke with their standard response to question the FAA’s decision-making.

“I’ve never, ever done this. I’ve never said that, ‘Hey, it’s unsafe to fly a particular model’ but in this case, I’m going to have to go there … So yeah I would watch for that airplane,” David Soucie, a former FAA safety inspector, told CNN.

The market has reacted as well. Boeing watched price plunge Tuesday more than 6%, or $25.90, to $373.92 as it tried to explain how such a tragedy could unfold twice for an aircraft that has racked up nearly 4,700 orders from more than 100 customers worldwide. It lost $12.7 billion in market value on Monday, alone.

The aerospace giant has already faced stiff headwinds as executives scramble to ensure airlines — and passengers — that its new planes are safe to fly. The MAX 8, the latest version of the iconic 737 jet, has become a popular new model for Boeing since its entry into commercial service in 2017. But now more than half of the global Max 8 fleet, or more than 150 jets, sits grounded around the world out of safety concerns.

“We understand that regulatory agencies and customers have made decisions that they believe are most appropriate for their home markets,” Boeing said Tuesday in a statement.

Although investigators have yet to come to firm conclusions, speculation has focused on Boeing’s new Maneuvering Characteristics Augmentation System (MCAS), an automated feature designed to keep the plane from stalling in mid-flight. Pilots in the Lion Air crash reportedly had trouble with the controls, which may have pushed the plane’s nose down into a dive.

The change was made without additional training for pilots, which Boeing said wasn’t necessary.

“The pilot will always be able to override the flight control law using electric trim or manual trim,” the company said. “In addition, it can be controlled through the use of the existing runaway stabilizer procedure as reinforced in the Operations Manual Bulletin (OMB) issued on Nov. 6, 2018.”

The coming software upgrade “will be deployed across the 737 MAX fleet in the coming weeks,” it said.

None of the top three officials at the FAA have been confirmed by the Senate. President Donald Trump named Daniel Elwell acting administrator in January after the end of the Obama-nominated administrator’s official five-year term. The deputy administrator and chief of staff are acting officials as well.

Trump has not yet nominated people for 144 different key posts which require Senate confirmation. 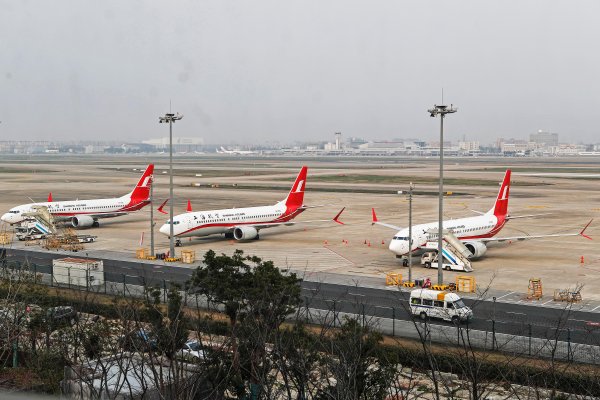