Airline operators are racing to find answers following the crash of Ethiopian Airlines Flight 302, which went down shortly after takeoff from Addis Ababa on Sunday morning, killing all 157 people aboard.

The aircraft is the second new Boeing 737 MAX 8 to go down in recent months, following the crash of Lion Air Flight 610 in October, which killed 189 people. “A brand new aircraft … having repeated fatal crashes would put a big question mark on this aircraft,” Bijan Vasigh, a professor of economics and finance at Embry-Riddle Aeronautical University, told TIME over email. The 737 MAX is the newest version of Boeing’s popular single-aisle airliner; the Associated Press reports that Ethiopian Airlines has only had this particular aircraft since November.

Caught at the center of two devastating crashes, representatives from Boeing have so far refrained from speculating on what may have caused Ethiopian Airlines Flight 302 to go down.

“We extend our heartfelt sympathies to the families and loved ones of the passengers and crew on board and stand ready to support the Ethiopian Airlines team,” a representative from the aircraft manufacturer told TIME in a statement. The company also noted that a Boeing technical team is heading to the crash site in order to provide technical assistance under the supervision of the Ethiopia Accident Investigation Bureau and the U.S. National Transportation Safety Board (NTSB).

Experts say it’s too early to know what may have been responsible for the recent crash of Flight 302, though they noted several similarities between the crash outside Addis Ababa and last year’s Lion Air Flight 610 tragedy.

“It’s an eye opener, because it’s the second accident and it’s almost involving the same kind of circumstances,” said Ahmed Abdelghany, a professor of operations management at Embry-Riddle. “It should be a concern, but it’s too early to confirm anything.”

Abdelghany noted the need for an in-depth investigation to determine the cause of the crash, particularly looking into the Ethiopian Airlines aircraft’s maintenance history. He did note several points of similarity between the two deadly crashes, including the fact that both involved the same model of aircraft, and occurred minutes after takeoff.

According to Abdelghany, investigators will first comb through the maintenance record of the aircraft and try to gain insights from its black box, though it will take two to three years to finalize a report on the main reasons behind the crash. Though he says it is likely that some travelers may try to avoid flying on 737 MAX 8 aircraft, at least until more answers come to light, he stressed that it is the responsibility of each airline to make sure their airplanes are safe. China has ordered Boeing 737 MAX 8 aircraft in the country to be grounded following the Ethiopia crash, while Cayman Airways also announced it has grounded its MAX 8 models. (Chinese aerospace firm Comac recently launched a competitor to the 737 line, the C919, but it’s not expected to start flying commercially until 2021.)

“Indications are these two accidents were not caused by human error, but were caused by mechanical error and transfer of information from cockpit to the pilot,” Vasigh told TIME, noting that it was still much too early to know the exact cause of Sunday’s crash. He also noted that Ethiopian Airlines has an excellent safety record and that Flight 302 was under the command of an experienced pilot.

According to Ethiopian Airlines, the pilot of Flight 302, Yared Getachew, had more than 8,000 hours of flying time and a record of “commendable performance.” The crashed plan had undergone a “rigorous” maintenance check in early February.

Following last year’s Lion Air crash, The New York Times reported that investigators determined new Boeing software might have been a factor in the disaster. The Times said investigators found the software “can send the plane into a fatal descent if the altitude and angle information being fed into the computer system is incorrect.” At the time, some in the aviation industry said that pilots may not have been adequately trained on that new system.

Abdelghany noted the importance of training pilots in new aeronautics systems, especially when changes have been implemented in new aircraft. He also noted brewing concerns regarding Boeing’s MAX 8 aircraft.

“If it takes serious action to stop this aircraft until we make sure it’s safe, we should take that action of course,” said Abdelghany. “People and safety come first.” 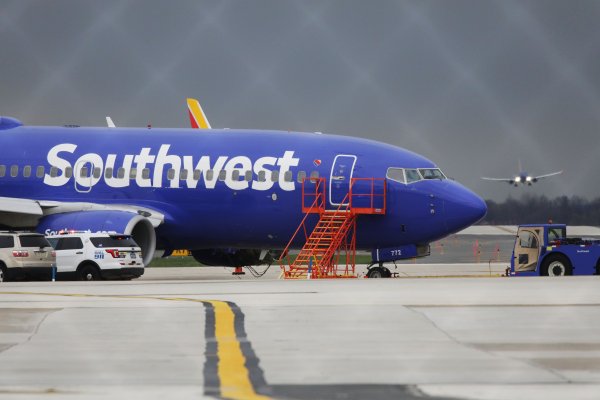 U.S. Airlines to Offer Non-Binary Gender Options on Tickets
Next Up: Editor's Pick